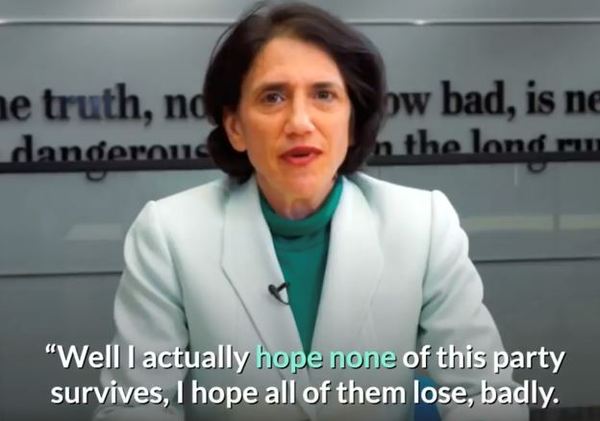 If the last few weeks have been bad for Democrats, imagine the dyspepsia and insomnia of the NeverTrump brigade. These are the so-called elite conservatives, intellectuals, smarter than your average Republican rube, the voice of reason and wisdom for the conservative movement.

They have beclowned themselves into irrelevancy since before Donald Trump was even elected, doubling down on stupid as they became punch lines on Twitter. Their latest outrage is President Trump’s impeachment and non-removal from office.

Impeachment is all but over, a wasted exercise in partisan derangement. It was a shiny object for media dogs and cats to chase around the room, never quite catching it.

For President Trump, it was a boost in his popularity, hitting 50 percent total approval in the Jan. 31 Rasmussen Daily Presidential Tracking Poll, the same day the U.S. Senate declined to call additional witnesses, since the House had already heard from 17 hand-picked Democrat witnesses, essentially ending the Senate impeachment trial.

Despite “mountains of evidence” and a “slam dunk case” that was “overwhelming,” House legal eagles Adam Schiff and Jerry Nadler failed to make the case for removing a president from office for the unpardonable sin attempting to do his Constitutional duty investigating government corruption.

On schedule, the whiny NeverTrump brigade turned to Twitter to fuss and pout, much like children when told “it’s time for bed” in the middle of a good game of pin the tail on The Donald.

Start with Bill Kristol, founder of the failed Weekly Standard and constant Trump critic, who after impeachment had his “coming out of the closet” moment, revealing what everyone has known for years, that he is really a Democrat.

Not presumably forever; not perhaps for a day after Nov. 3, 2020; not on every issue or in every way until then. But for the time being one has to say: We are all Democrats now.

He tweeted after the Senate voted for no witnesses, perhaps secretly hoping he would be called to the Senate to wax eloquently on Trump’s unsuitability to live or breathe, that “We are all Democrats now”. A call to arms to his fellow Trump haters to throw a lifetime of conservative advocacy out the window to support socialists like Bernie Sanders or Elizabeth Warren.

What better way to advance conservative principles than getting behind a quasi-communist who wants to nationalize health care and energy, rewrite the Constitution, open the borders, allow full-term abortion, and mandate that any Department of Education nominee be selected by “a young trans person.”

That’s the ticket for advancing conservatism. How did Ronald Reagan get it so wrong?

There is also the so-called conservative columnist at the Washington Post, Jennifer Rubin. How her name and the word conservative can be used in the same sentence is beyond me. Then again, CNN airs a show featuring Brian Stelter called “Reliable Sources” so in the world of the left, words mean whatever they say they mean.

She gushed over Adam Schiff, “This is the most brilliant legal presentation I have heard. None comes close. The tone, the facts, the anticipated defenses. I am in awe.” Right. Schiff is a modern-day Clarence Darrow or Atticus Finch.

She must have missed that the fact-checker at her own newspaper gave Schiff “four Pinocchios” for his whistleblower remarks.

She attempted to snark the President’s attorneys, Jay Sekolow and Pat Cippolone, tweeting, “Can you imagine if Sekulow and Cipollone had to try a case in front of a real judge? Bhahaahhahahahaha”

Perhaps she doesn’t consider the Chief Justice of the Supreme Court a real judge. After his Obamacare ruling, she may have a point.

Yet in her bhahaha, she missed the fact that Sekulow argued 12 cases before the U.S. Supreme Court, real judges. Cippolone has years of experience in complex litigation at a big D.C. law firm. Arguing cases before real judges. Adam Schiff only argues his cases in front of Jake Tapper and Chris Matthews.

Next is NeverTrump Rick Wilson, a Republican political strategist whose last effort was the underwhelming presidential campaign of Evan McMullin, the NeverTrump savior who garnered just 700,000 votes, less than even Jill Stein.

Wilson described Republican voters, who overwhelmingly support President Trump as “boomer rubes” while CNN host Don Lemon laughed himself silly. What a business model, insulting those you say you represent.

Max Boot is another famous NeverTrumper, another so-called conservative, in the mold of “severely conservative” Mitt Romney. Boot tweeted: “I want nothing to do with a party led by the deluded and the dishonest. I fervently hope our democracy survives this debacle. I fervently hope the Republican Party does not.”

Deluded and dishonest describes Democrats, not Republicans, unless one is wearing Trump derangement eyeglasses.

By not playing along with the Pelosi-Schiff faux impeachment, GOP Senators are “deluded and dishonest.” Like Bill Kristol, he wants the Republican Party to go away. Given the two-party political system in America, that’s not likely to change anytime soon, and if the Republican Party dies, then Democrats run the entire show.

Again, what better way to advance conservatism than to put Bernie, Pocahontas or AOC in charge.

Don’t forget the insufferable Mr. Kellyanne Conway, also known as George, who can let a minute go by without publicly bashing his wife’s boss. In one recent tweet he drew a comparison between President Trump and the family of North Korean dictators: “Everyone must do whatever they are told lest they displease dear perfect leader.”

Lastly are two cable news harpies, both previously serving in Republican administrations under NeverTrumpers with the last name of Bush. Ana Navarro served on the transition team for Florida Gov. Jeb Bush and now spews her anti-Trump venom on CNN. Across the airwaves at MSNBC, there is Nicolle Wallace, former George W. Bush White House Communications Director.

Like the Bush family they once served, they spew fire and brimstone toward President Trump. Navarro recently tweeted, “They will defend and justify anything Dear Leader says or does, regardless of how wrong, outrageous or offensive. Anything.” Wallace already has Trump convicted and frog marched out of the White House tweeting, “And the next step would be for someone on talk radio to start musing about how a president (sic) Pence would be just fine.”

The NeverTrumpers all follow and retweet each other, creating an echo chamber, amplifying and reinforcing their Trump Derangement Syndrome. As Bush establishment Republicans, they would be delighted with the open borders and the endless wars of past Republican presidents. When confronted with a truly conservative presidential administration, they run like scalded dogs.

As William Shakespeare wrote: “Now is the winter of our discontent, made glorious summer by this sun of York.” As impeachment fizzles and Trump continues making America Great again, this will be a long winter of discontent for NeverTrumpers and the left.

If Attorney General Bill Barr is taken at his word that U.S. Attorney John Durham will be wrapping up his work in early summer, the summer of 2020 may indeed be glorious, with indictments and declassifications just in time for the nominating conventions and fall campaign. Expect NeverTrumpers’ hair on fire as the 2020 election approaches.