‘We have millions of Americans whose minds are poisoned by the Left and the media,’ he says 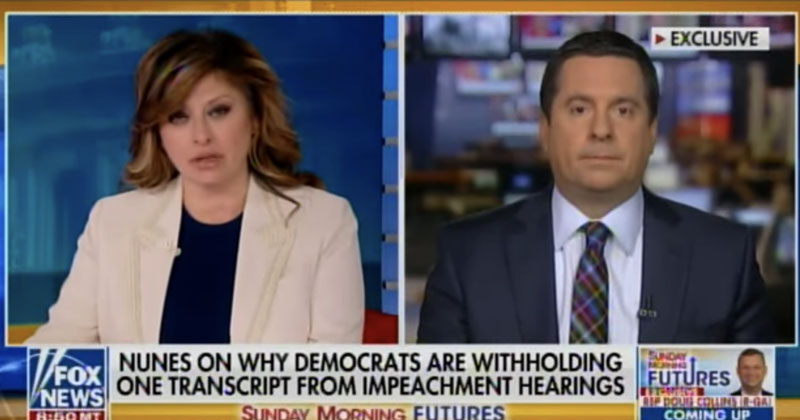 Rep. Devin Nunes (R-Calif.) ripped into the mainstream media networks for lying to the American people for over three years in pushing both the Russia collusion narrative and the Ukraine impeachment hoax.

Appearing on “Sunday Morning Futures,” Nunes told host Maria Bartiromo that the media has been wrong about almost every major issue they’ve foisted onto the nation, including the Jussie Smollett hoax, the Covington Catholic debacle, the economy, and Trump’s foreign policy.

“I believe we’re going to get accountability,” Nunes said. “I believe Durham is going to get to the full story…I’ve been saying for a long time that the National Security Council that’s there at the White House, 400 and some people, he would be best to take all of those people, ship them across the Potomac, quarantine them, get them the hell away from the White House, because we know that a lot of the leaks for the last three plus years have been coming from that National Security Council. The President really only needs to have Trump appointees with him in the White House.”

Nunes went on to demolish the corporate media, calling out their allegiance to the Democrat Party and their refusal to do actual journalism.

“That’s really what caused this problem, Maria. The legacy media in this country, they’re not doing their jobs,” Nunes said.

“This whole Russia hoax and Ukraine hoax, they were in on it from the very beginning. They’ve refused to talk about just how wrong the Democrats really were…They’re just part of the team. They’re part of the socialist left. There’s no other excuse for it.”

“We never missed once. Everything we said came out to be true…We have millions of Americans whose minds are poisoned by the left and the media,” he added.

In perhaps the most symbolic occurrence in recent times, the Newseum is Washington DC has permanently closed. As a monument to the power and prestige of the news media, it is perhaps appropriate that it should close, as the once-respected Mainstream Media collapses in distrust and irrelevance.

One thought on “NUNES BLASTS FAKE NEWS NETWORKS FOR LYING TO AMERICAN PEOPLE, COVERING FOR DEMOCRATS”