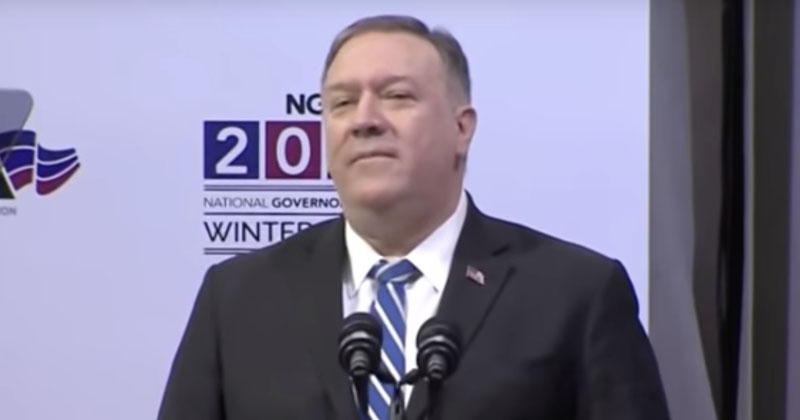 Secretary of State Mike Pompeo warned America’s governors about China’s attempt to influence them in foreign and economic policy matters, saying the Communist government is attempting to shape U.S. policy by suppressing free speech and assessing how friendly each governor is to it.

Speaking at the National Governors Association meeting in Washington on Friday, Pompeo said the Chinese government has assessed every single governor on their attitude towards China with the labels “friendy, hard-line, or ambiguous.”

“They’ve labeled each of you friendly, hardline or ambiguous,” he said, citing a report by a Chinese-backed think tank. “I’ll let you decide where you think you belong. Someone in China already has. Many of you indeed, in the report are referenced by name.”

Pompeo explained how China pressures U.S. diplomats to bend to their will on foreign policy, describing an example of a Chinese diplomat demanded a U.S. elected official not acknowledge Taiwan as an independent nation, or even communicate with them.

“You have a diplomat from China assigned here to the United States – a representative of the Chinese Communist Party, in New York City – sending an official letter urging that an American elected official shouldn’t exercise his right to freedom of speech,” Pompeo said. “Let that sink in for a minute.”

“So here’s the lesson. The lesson is the competition with China is not just a federal issue,” Pompeo said. “It’s happening in your states with consequences for our foreign policy, for the citizens who reside in your states and indeed for each of you.”

“You get curveballs every day from all across the place,” Pompeo added. “But don’t lose sight of the competition with China that’s already present in your state. Let’s all rise to the occasion and protect our security, our continent, and all that we hold dear, all of our freedoms.”