‘They care greatly about people who have checkbooks’ 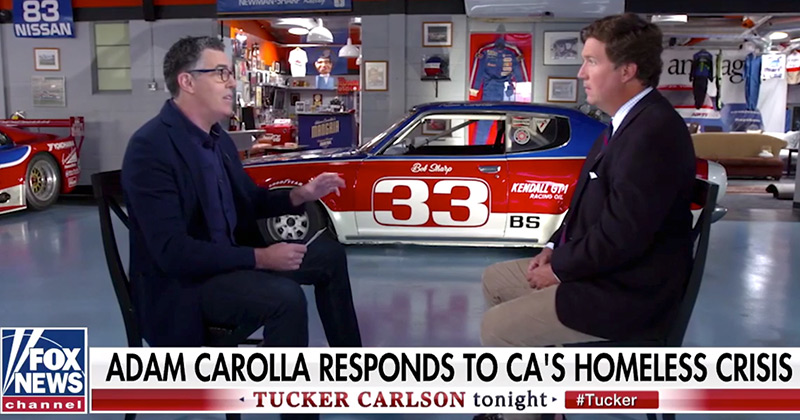 Carolla credited the homeless epidemic to a “breakdown of the rule of law.”

“No one wants to enforce laws around here,” he pointed out.

Having been born and raised in Los Angeles, Carolla described how the state has become a place where citizens are divided into two groups, “the groups that have money and then there are the empty bags. They don’t have any money.”

The comedian and podcast host said L.A. taxpayers often get tickets for minor offenses such as not having a front license plate on their vehicles, meanwhile, homeless and illegal people are mostly left alone because they don’t have money to give the city.

“So, they don’t care?” Carlson asked.

“They would care if they owed them money and they had money and they could get money from them,” Carolla answered. “They care greatly about people who have checkbooks, but they’ve really divided the entire city into those who pay and those who can’t. And if you can’t, they’re not that interested.”

In an anecdote highlighting the city’s hypocrisy, Carolla said every day illegal immigrants sell flowers without permits outside a major cemetery as a cop sits down the street waiting to ticket “soccer moms who are going 42 mph in a 35.”

Essentially, the cop ignores illegal activity on one side of the street because that group has no money or documentation while the soccer mom is targeted because she typically has funds to pay her fine.

This isn’t an issue for the city’s wealthy occupants, as Carolla explained, “If you’re Barbra Streisand. What do you care about a speeding ticket… and if you’re ultra-poor, you’re untouchable because you can’t get blood out of a turnip. You know, there’s nothing there. There’s none. You can’t pay them.”

“It’s the middle who gets the crap kicked out of them here in Los Angeles,” he concluded, exposing a major flaw in the city’s revenue-generating scheme.

When asked why city leaders are allowing this to happen, Carolla argued people these days are afraid of being labeled “mean.”

Carolla claimed people are criticized for doing their jobs, such as a teacher suspending an unruly student or an elected official getting rid of a homeless camp.

President Trump has threatened to step in and help save California from Democrat politicians, warning if they “don’t straighten it out, the federal government will have to come in.”