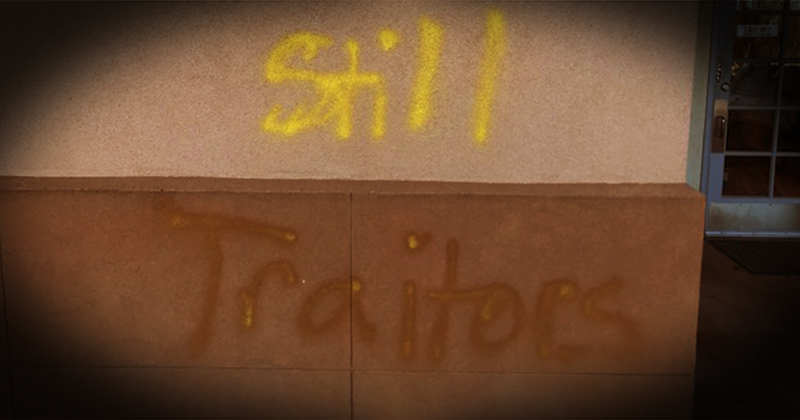 The suspect, Cameron Chase McCall, is said to have caused around $4,000 in damages to the building.

According to a criminal complaint, McCall is directly affiliated with the Democratic Party and works at a state-run entertainment facility called EXPO New Mexico.

After an unknown individual, likely McCall, wrote “Traitor” on the wall last March, the Republican Party HQ installed surveillance cameras that caught the most recent incident on film.

“Do you know this man?” they wrote on Facebook, offering a $1,000 reward for information. “He defaced the front of Republican Party of New Mexico headquarters early Saturday morning.”

After news of the vandalism spread around town, the state’s Democratic Party spokesperson Miranda van Dijk condemned the criminal act.

“Our focus as Democrats is to continue engaging in a productive and respectful dialogue about the kind of policies that are going to make a difference in the lives of hardworking New Mexicans, and it’s unfortunate when actions like this distract from that conversation,” van Dijk said.

However, it turns out McCall was a congressional intern for Democratic Gov. Michelle Lujan Grisham and is deeply involved in the state’s Democratic Party.