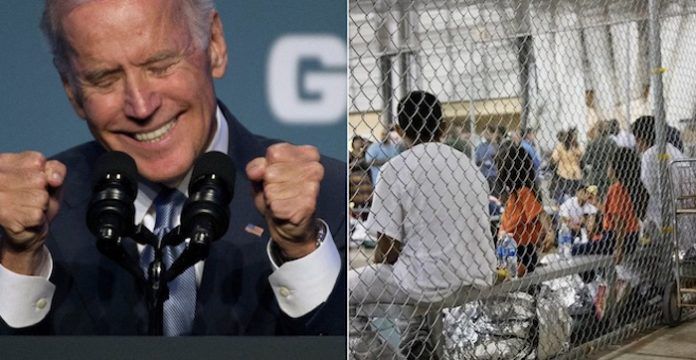 Democratic presidential candidate Joe Biden has defended the Obama administration’s use of holding facilities and cages for migrant children claiming it was done to keep them ‘safe‘.

In an interview Friday posted on Facebook, Univision journalist Jorge Ramos grilled Biden on a claim he made in September that the Obama administration never put migrant children in cages.

‘What Latinos should look at is comparing [Obama] to the president we have is outrageous,‘ Biden said in September. ‘We didn’t lock people in cages. We didn’t separate families. We didn’t do all of those things.’

‘You actually did,’ Ramos said Friday, showing him a picture of an 8-year-old boy in at a holding facility in McAllen, Texas in 2014.

It and similar facilities were constructed by the Obama administration, and continued to be used in the Trump administration. But left-wing lawmakers and pro-immigration activists accused Trump of ‘putting kids in cages’, particularly after his administration pursued a zero-tolerance policy of arresting adults who crossed the border illegally, a policy that was abandoned after uproar.

‘What happened was all the unaccompanied children were coming across the border,’ Biden told Ramos. ‘We tried to get them out, we kept them safe, and get them out of the detention center… run by Homeland Security and get them into communities as quickly as we can.’

‘Many people would say they were cages,’ Ramos said.

Biden mustered a similar retort when Ramos reminded him that, as a senator, Biden supported appropriations for physical border barriers.

Biden insisted he supported construction of facilities at ‘legal points of entry,’ where he said most drugs and terrorist activity enters. ‘Making sure we modernize crossings,’ Biden argued, is different than ‘a wall that (Trump) wants from sea to shining sea.’

In the same interview, Biden also expressed regret over the Obama administration’s deportation policies,  calling it a ‘big mistake‘ to have deported hundreds of thousands of people without criminal records.

‘We took far too long to get it right,’ Biden said.

The former vice president later added: ‘I think it was a big mistake. Took too long to get it right.’

In written statements included as part of Biden´s proposed immigration overhaul, the campaign already had acknowledged ‘pain’ surrounding deportations that occurred when he served as President Barack Obama´s vice president. But the candidate himself had not so clearly stated his personal regrets.

The 20-minute interview was posted to Ramos’ Facebook page, and Biden aides said portions would be broadcast in coming days on Univision as Biden and his Democratic presidential rivals campaigned in Nevada ahead of the February 22 caucuses, the third nominating contest and the first with a significant Latino population.

Biden emphasized to Ramos his proposals to expand legal immigration, bolster the asylum process and end construction of a U.S.-Mexico border wall. The project has been President Donald Trump´s hallmark anti-immigration effort.

‘This is a big country,‘ Biden told Ramos, dismissing ‘the idea we can´t accommodate more people in the interest of the United States‘.

He called ‘legal as well as undocumented immigrants’ key contributors to the U.S. economy and society.