Authored by Mark Glennon via Wirepoints.org,

Billionaire presidential candidate Michael Bloomberg is paying salaries of lawyers who promote his agenda in state attorney general offices in liberal leaning states, including Illinois, according to various reports.

Bloomberg money currently funds the salaries of Special Assistant Attorneys General (SAAGs) in 10 Democratic AG offices, according to Fox News. Illinois is among those states. There is no indication how many SAAGs are implanted in the office of Illinois Attorney General Kwame Raoul.

“What’s problematic is the arrangement through which a private organization or individual can promote an overtly political agenda by paying the salaries of government employees,” said Indiana Attorney General Curtis Hill.

Funding runs through the State Energy & Environmental Impact Center at New York University School of Law. That center, according to Fox, was started in 2017 with $5.6 million from Bloomberg’s nonprofit. It hires mid-career lawyers as “research fellows” before providing them to state AGs – where they assist in pursuing “progressive” environmental policy goals through the courts. 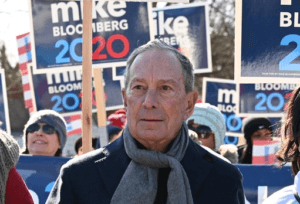 This scheme by an activist donor [Bloomberg] to place attorneys in AG offices to advance his priorities is on its face staggering. That the activist developed it while more broadly cultivating support among elected officials at all levels through his foundation, and apparently with a run for the White House also in mind, makes it simply unbelievable.

“These folks are being funded as mercenaries, liberal mercenaries, not just on a climate issue but other issues near and dear to Mike Bloomberg’s radical liberalism. And they’re doing everything from filing suits to writing comment letters to testifying at Trump administration hearings.”

Other states where SAAGs are implanted include the Delaware, Connecticut, Massachusetts, Maryland, Minnesota, New Mexico, New York and Oregon, according to Fox News and other sources.

We have seen no comment yet from Illinois Attorney General Kwame Raoul.