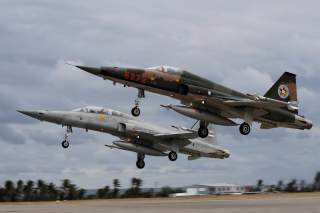 Key point: Even a limited attack could backfire for China.

The Chinese military still lacks the ability decisively to conquer Taiwan by way of a full-scale amphibious invasion, according to the 2019 edition of the U.S. Defense Department’s annual report on Chinese military developments.

But the People’s Liberation Army Navy’s amphibious capabilities steadily have improved in recent years. It might not be long before Beijing’s forces safely can conduct a major assault across the Taiwan Strait.

“The PLAN is the region’s largest navy, with more than 300 surface combatants, submarines, amphibious ships, patrol craft and specialized types,” the report explains. “It is also an increasingly modern and flexible force. The PLAN is rapidly replacing obsolescent, generally single-purpose platforms in favor of larger, multi-role combatants featuring advanced anti-ship, anti-air and anti-submarine weapons and sensors.”

The Chinese navy’s amphibious fleet has grown and modernized. “China’s investments in its amphibious ship force signal its intent to develop expeditionary warfare capabilities,” according to the American report.

The PLAN has five large Yuzhao-class … amphibious transport docks (LPD), with three more under construction or outfitting during 2018. The Yuzhao LPD provides a greater and more flexible capability for long-range operations than the PLAN’s older landing ships. It can carry several of the new Yuyi-class air-cushion medium landing craft and four or more helicopters, as well as armored vehicles and PLAN marines for long-distance deployments.

The PLAN probably will continue constructing Yuzhao LPDs even as it pursues a follow-on amphibious assault ship that is not only larger but also incorporates a full flight deck for helicopters.

The Chinese marine corps likewise is expanding. “By 2020, the PLANMC will consist of seven brigades, may have more than 30,000 personnel, and it will expand its mission to include expeditionary operations beyond China’s borders,” the report predicts.

But Beijing is struggling to equip its naval infantry.

China lacks a sufficient inventory of wheeled armored vehicles to support multiple PLANMC expeditionary deployments adequately. Fully operational brigades are equipped exclusively with amphibious armored vehicles. The PLANMC has not received the helicopters required for an air-assault capability, and it will likely need a minimum of 120 attack and medium-lift helicopters to be fully mission-capable.

Achieving this level of capability would include basing helicopters overseas to support PLANMC units and operating from amphibious ships.

In 2018 the People’s Liberation Army trained for amphibious warfare. The PLA “conducted a joint amphibious exercise in the eastern theater in the early fall as well as numerous smaller force-on-force exercises, including an exercise between two newly reformed amphibious mechanized infantry brigades in the southern theater,” the report explains.

But it still can’t decisively defeat Taiwan, according to the Pentagon. “China has an array of options for a Taiwan campaign, ranging from an air and maritime blockade to a full-scale amphibious invasion to seize and occupy some or all of Taiwan or its offshore islands.”

“But there is no indication China is significantly expanding its landing ship force necessary for an amphibious assault on Taiwan.”

Large-scale amphibious invasion is one of the most complicated and difficult military operations. Success depends upon air and maritime superiority, the rapid buildup and sustainment of supplies onshore, and uninterrupted support. …

These stresses, combined with China’s combat force attrition and the complexity of urban warfare and counterinsurgency, even assuming a successful landing and breakout, make an amphibious invasion of Taiwan a significant political and military risk.

Beijing does, however, have options for attacking Taiwan that do not involve a full-scale blockade or invasion. “The PLA is capable of accomplishing various amphibious operations short of a full-scale invasion of Taiwan,” the American report explains.

“With few overt military preparations beyond routine training, China could launch an invasion of small Taiwan-held islands in the South China Sea such as Pratas or Itu Aba. A PLA invasion of a medium-sized, better-defended island such as Matsu or Jinmen is within China’s capabilities. Such an invasion would demonstrate military capability and political resolve while achieving tangible territorial gain and simultaneously showing some measure of restraint.”

Of course, even a limited attack could backfire for China. “This kind of operation involves significant, and possibly prohibitive, political risk because it could galvanize pro-independence sentiment on Taiwan and generate international opposition.”

David Axe serves as Defense Editor of the National Interest. He is the author of the graphic novels  War Fix, War Is Boring and Machete Squad. This first appeared in 2019.