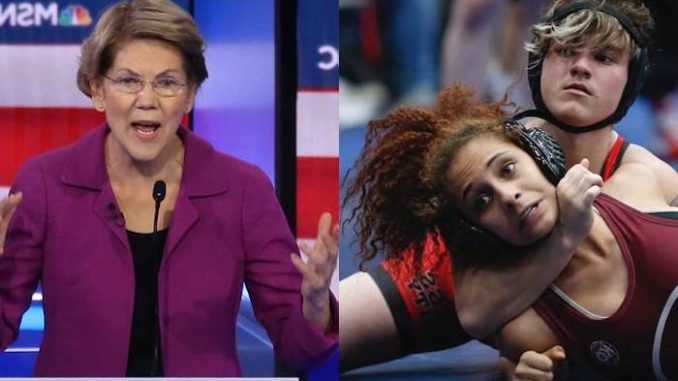 Democrat presidential candidate Sen. Elizabeth Warren says Arizona must vote down a “cruel” bill that would ban males from competing in women’s sports.

“Trans athletes are not a threat,” Warren wrote in a tweet on Thursday. “We need to protect trans kids—and all LGBTQ+ kids—and ensure they feel safe and welcomed at school. I urge the Arizona legislature to reject this cruel bill.”

The “Save Women’s Sports Act” would ensure high-school students compete by their “biological sex” rather than the gender with which they identify, meaning biological females will compete together and biological males will only be allowed to compete against other biological males.

National Review report: The bill, introduced by state representative Nancy Barto, a Phoenix Republican, and co-sponsored by 22 other GOP state legislators, is intended to protect female athletes from competing against athletes who possess an unfair advantage over them, Barto claims.

“Female student-athletes should not be forced to compete in a sport against biological males, who possess inherent physiological advantages. When this is allowed, it discourages female participation in athletics and, worse, it can result in women and girls being denied crucial educational and financial opportunities,” Barto said.

Both public and private schools, including community colleges and universities, would be bound by the law.

In order for a transgender student to challenge a rejection from a girls sports league based on their male biology, the student must produce a sworn statement from a doctor describing the student’s “internal and external reproductive anatomy,” genetic makeup, and “normal endogenously produced levels of testosterone.”

Advocates for LGBT rights have skewered the bill. The National Center for Lesbian Rights claimed transgender athletes have not caused any issues and accused lawmakers of attempting to “polarize and divide” people.

Transgender students have been allowed to compete in leagues with their preferred gender since 2014.

The bill comes after three female high-school students and their families filed a federal lawsuit seeking to block transgender athletes from competing in girls sports in Connecticut.