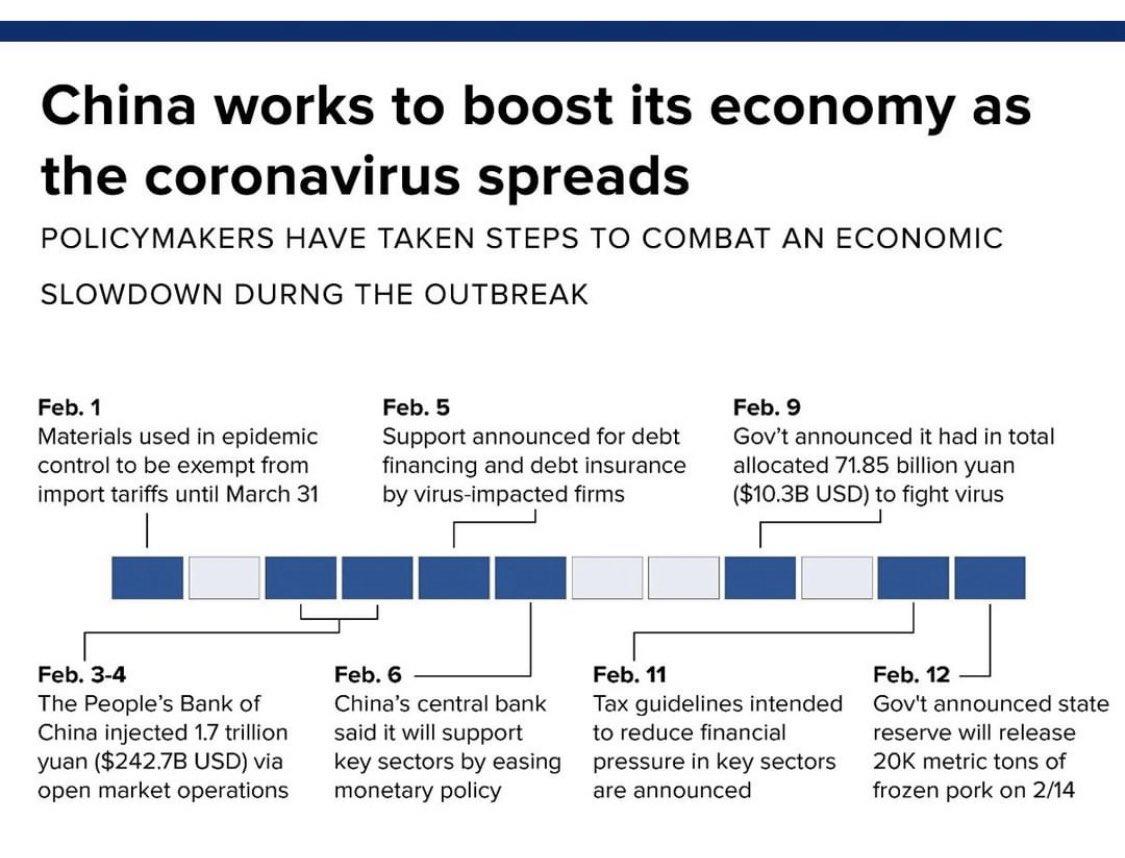 For the past two weeks, even as the market took delight in China’s doctored and fabricated numbers showing the coronavirus spread was “slowing”, we warned again and again that not only was this not the case (which recent data out of South Korea, Japan and now Italy has confirmed), but that for all its assertions to the contrary, China’s workers simply refused to go back to work (even with FoxConn offering its workers extra bonuses just to return to the factory) and as a result the domestic economy had ground to a halt as we described in:

Unfortunately, it’s not getting any better as the latest high frequency updates out of China demonstrate: 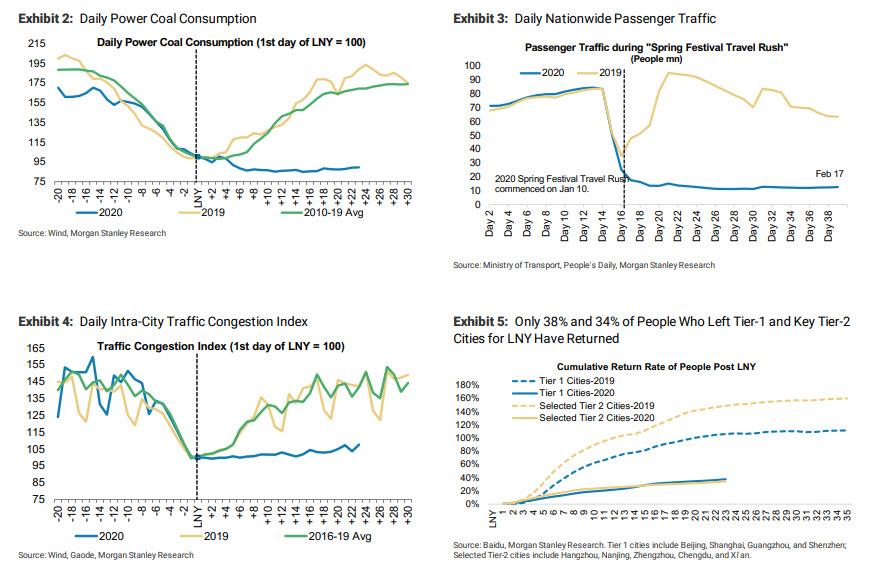 Also unfortunately, it is getting worse, because as we explained several weeks ago, China is now fighting against time to reboot its economy, and the longer the paralysis continues, the more dire the outcome for both China’s banks and local companies. And since it is no longer just “scaremongering” by “conspiracy blogs”, but rather conventional wisdom that China may implode, here is a summary of how the narrative that “it will all be over by mid-March” is dramatically changing.

Let’s start with Chinese businesses: while China’s giant state-owned SOEs will likely have enough of a liquidity lifeblood to last them for 2-3 quarters, it is the country’s small businesses that are facing a head on collision with an iceberg, because according to the Nikkei, over 85% of small businesses – which employ 80% of China’s population – expect to run out of cash within three months, and a third expect the cash to be all gone within a month. 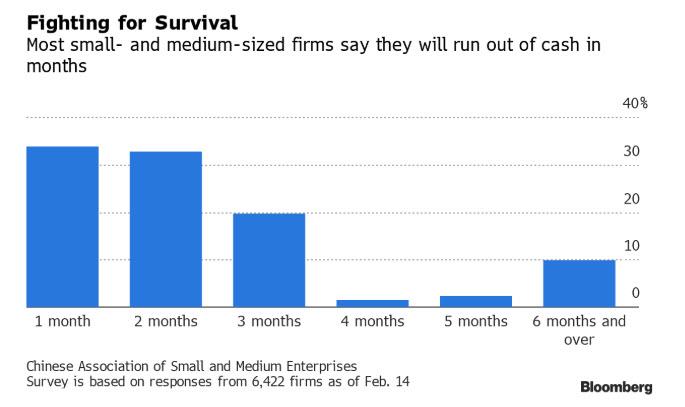 Should this happen, not only will China’s economy collapse, but China’s $40 trillion financial system will disintegrate, as it is suddenly flooded with trillions in bad loans.

Take the case of Danny Lau who last week reopened his aluminum facade panel factory in China’s southern city of Dongguan after an extended Lunar New Year break. To his shock, less than a third of its roughly 200 migrant workers showed up.

“They couldn’t make their way back,” the Hong Kong businessman said. Most of his workers hail from central-western China, including 11 from Hubei Province, the epicenter of the coronavirus outbreak that has killed more than 2,000 people. Many said they had been banned from leaving their villages as authorities race to contain the epidemic.

Lau’s business had already been hurt by the 25% tariff on aluminum products the U.S. imposed in its tit-for-tat trade war with China. Now he worries the production constraints will give American customers another reason to cancel orders and switch to Southeast Asian suppliers. The virus is making a bad situation “worse,” he said.

Lau is not alone: this same double blow is hitting small and midsize enterprises across China, prompting a growing chorus of calls for the government to step in and offer lifelines. The stakes could not be higher: These smaller employers account for 99.8% of registered companies in China and employ 79.4% of workers, according to the latest official statistics. They contribute more than 60% of gross domestic product and, for the government, more than 50% of tax revenue. In short: they are the beating heart of China’s economy. 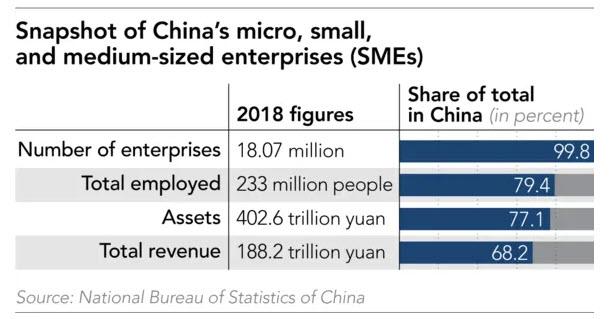 Companies like Lau’s that have resumed some production are the lucky ones. Many factories and other businesses remain completely stalled due to the virus. Many owners have no other choice but pray that things return to normal before they careen off a financial cliff.

And here is the stark reality of China’s T-minus 3 months countdown: 85% of 1,506 SMEs surveyed in early February said they expect to run out of cash within three months, according to a report by Tsinghua University and Peking University. And forget about profits for the foreseeable future: one-third of the respondents said the outbreak is likely to cut into their full-year revenue by more than 50%, according to the Nikkei.

“Most SMEs in China rely on operating revenue and they have fewer sources for funding” than large companies and state-owned enterprises, said Zhu Wuxiang, a professor at Tsinghua University’s School of Economics and Management and a lead author of the report.

The problem with sequential supply chains is that these also apply to the transfer of liquidity: employers need to pay landlords, workers, suppliers and creditors – regardless of whether they can regain full production capacity anytime soon. Any abrupt and lasting delays will wreak havoc on China’s economic ecosystem.

“The longer the epidemic lasts, the larger the cash gap drain will be,” Zhu said, adding that companies affected by the trade war face a greater danger of bankruptcy because many are already heavily indebted.  “Self-rescue will not be enough. The government will need to lend help.”

So where are we nearly two months after the epidemic started? Wwll, as of last Monday, only about 25% of people had returned to work in China’s tier-one cities, according to an estimate by Japanese brokerage Nomura, based on data from China’s Baidu. By the same time last year, 93% were back on the job.

And making matters worse, as we first noted several weeks ago, local governments around the country face a daunting question of whether to focus on staving off the virus or encourage factory reopenings, as the following tweet perfectly captures.

One thought on ““It Will Be Really, Really Bad”: China Faces Financial Armageddon With 85% Of Businesses Set To Run Out Of Cash In 3 Months”