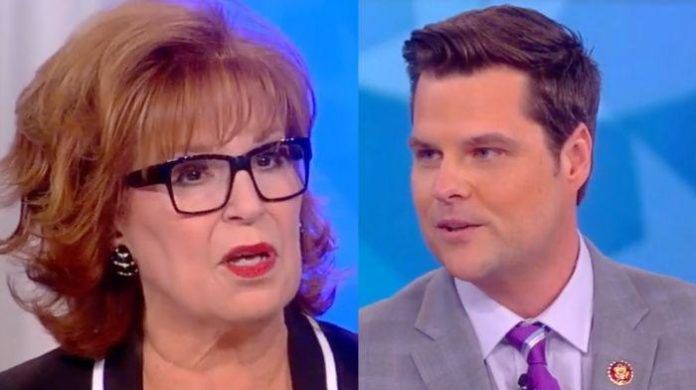 Joy Behar and the shrews on “The View” met their match in Matt Gaetz.

Rep. Matt Gaetz (R-FL) appeared on ABC show on Thursday and it is safe to say the Florida native bought the heat.

Gaetz hit Joy Behar hard straight off the bat when he asked if she was wearing black to mourn the death of the political left. Whoopi Goldberg sat there stunned, and Joy Behar started freaking out.

But Gaetz was just getting warmed up. You’ll love this.

.@TheView did not expect @RepMattGaetz to bring the heat. Well 👏🏽done. 👏🏼

MadWorld report: Any politician, especially a white heterosexual male Trump supporter, committing to an appearance on The View better be ready to hit the cohosts hard from the get-go. Whoopi Goldberg, Joy Behar, and Sunny Hostin don’t play fair when it comes to President Donald Trump.

In fact, it’s pretty well known the entire show is now devoted to smearing and trashing all things Trump. So, when Rep. Matt Gaetz showed up and Joy Behar introduced him with a side of snark, the Congressman knew he had to knock her down a notch.

Joy Behar introduced Gaetz as one of the biggest supporters of President Donald Trump, saying, “Please welcome a man who has obviously never watched ‘The View,’ Congressman Matt Gaetz. Hello.”

“Thank you for having me. I do watch. You guys make news every week,” Gaetz protested— and immediately brought the fight directly to Behar. “I was just wondering if you were wearing black as a consequence of the death of the political left in the debate last night. It was quite something to observe.”

The truth of this sarcastic remark caught Goldberg and her fellow cohosts off-guard. Their faces deflated as if someone had just delivered devastating news.

“Don’t count the dead yet, the bodies,” Behar said dejectedly. “Let’s give it a little time.”

“Joe Biden at least. I was hoping that maybe Whoopi’s bell could wake up the Biden campaign,” Gaetz pressed again.

Behar was quick to defend Biden, saying, “I thought actually he didn’t do any harm to himself last night.”

“What state is he going to win?” Gaetz laughed. “This is a man — the fundamental premise of the Biden campaign is that he’s electable but he can’t seem to win elections. You have socialist Bernie Sanders against billionaire Michael Bloomberg.”

Gaetz went on to point out that Bloomberg used to be a Republican, at which point Behar pointed out that President Donald Trump used to be a Democrat. Gaetz saw that comeback a mile away. In fact, he was counting on it.