Update (1245ET): More updates out of Europe. Earlier, we reported the first coronavirus cases had been confirmed in Austria and Croatia, showing that the virus has now spread to both central and southeastern Europe.

Earlier, we noted the WHO saying that while the pace of new infections has slackened in China thanks in part to the administration’s heavy handed crackdown to fight the virus, if officials and the public aren’t careful, we could see a resurgence. The WHO also warned that the world is wildly unprepared for the coronavirus, a fact that the CDC and HHS Secretary have now echoed about America’s ability to respond to the crisis.

German officials gave the first hint at what is coming earlier today when they said that closing borders with Italy wouldn’t solve the problem (note: this is the same logic they used during the migrant crisis and we all remember how that turned out). Now, European health officials have collectively decided that closing borders would be “ineffective,” concluding days of mounting speculation about whether Italy, or its neighbors, would suspend Schengen rules governing the free movement of people across the EU.

According to Bloomberg, health ministers from Austria, Croatia, France, Germany, Italy, Slovenia, Switzerland and a representative from San Marino agreed on Tuesday to keep European borders open, arguing that closing them would be a “disproportionate and ineffective measure” at this time.

Before we go, the story of the four-star hotel at Tenerife, a Spanish island where an Italian doctor and his wife who both tested positive for COVID-19, appears to have captured the imagination of the international press.

According to the BBC, the couple were staying at the H10 Costa Adeje Palace hotel on the island, which is the largest of Spain’s Canary Islands. The doctor tested positive Monday, and his wife the following day. They’ve been placed in isolation at the University Hospital Nuestra Senora de Candelaria.

But in their wake, an entire hotel with more than 100 guests has been put under quarantine.

Here’s a still from a video of the residents gazing forlornly at the outside world that was initially shared by the NY Post. 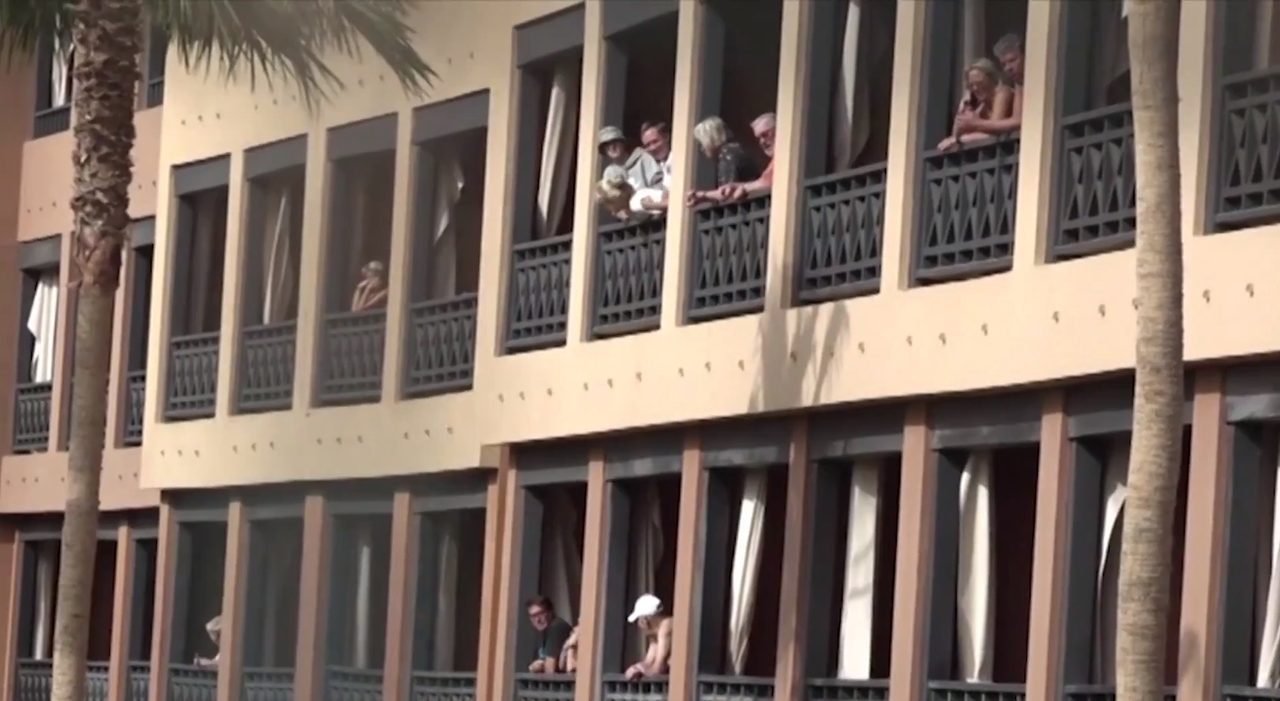 Residents have been told to wait in their rooms as health officials test everyone in the building.

Update (1145ET): US CDC says COVID-19 epidemic is rapidly evolving and expanding, warning that a vaccine could be ready in a year, and Americans should prepare for possible spreads in communities.

“Now is the time for businesses, hospitals, communities, and schools to begin preparing to respond to coronavirus.”

Nancy Messonnier, the director of the CDC’s National Center for Immunization and Respiratory Diseases, said: “As more and more countries experience community spread, successful containment at our borders becomes harder and harder.”

Additionally, HHS Secretary Alex Azar says at Senate panel hearing that the U.S. doesn’t have enough stockpiles of masks and ventilators to fight the coronavirus and that’s one reason the Trump administration is seeking $2.5b in funding.

About 30m so-called N95 respirator masks are stockpiled but as many as 300m are needed for healthcare workers, Azar says, adding that his department doesn’t yet know how much they would cost.

Democratic Sen. Patty Murray, who questioned the administration’s readiness to battle the spread of the virus:

“I’m deeply concerned we’re way behind the eight ball on this,” Murray said while questioning Azar at the Appropriations subcmte hearing.

Azar also says the money would be used to help develop vaccines and treatments for the virus and that a vaccine could be ready in a year.

Update (1100ET): WHO’s Bruce Aylward told journalists that China’s actions “prevented hundreds of thousands of cases” and warned that the rest of the world “is not ready for the virus to spread,” adding that “countries should instruct citizens now on hygeine.”

Update (1001ET): A case of the novel corona virus has been confirmed for the first time in Switzerland. The federal government announced on Tuesday. One person was tested positive for the virus, said those responsible.

Italian officials stated that the first patient was “obviously infected in Italy,” and will consider further measures if they think “uncontrolled transmission” of the virus is occurring.

Update (0950ET): Spanish authorities have confirmed the fourth case of coronavirus in Catalonia, according to La Vanguardia.

Jordan has banned flights arriving from Italy, becoming the first country in the region to guard against travelers from Europe’s third-largest economy.

Update (0900ET): Iran’s MP Mahmoud Sadeghi said he had tested positive for the coronavirius, telling supporters: “I don’t have a lot of hope of continuing life in this world”.

CBS has confirmed that it was an Italian doctor visiting the Spanish isle of Tenerife who prompted all guests at his hotel to be confined to their rooms on Tuesday. The country has now confirmed nearly 60 cases on Tuesday.

In the UAE, home to long-haul carriers Emirates and Etihad, airlines have suspended flights to and from Iran for at least a week, cutting the country’s 80 million people off from thousands of flights.

Unsurprisingly, the Dems were quick to slam the White House’s $2.5 billion spending plan that was sent lawmakers on Monday to address the deadly coronavirus outbreak. Democrats said the request fell far short of what’s needed.

House Speaker Nancy Pelosi called the president’s request “long overdue and completely inadequate to the scale of this emergency” in a statement released Monday. She added that the House would propose a “strong, strategic” funding package of its own to address the public health crisis.

Because nothing solves a public health crisis like a political stalemate.

“We have a crisis of coronavirus and President Trump has no plan, no urgency, no understanding of the facts or how to coordinate a response,” said Senate Minority Leader Chuck Schumer.

Trump joked in public remarks Tuesday that if he had authorized more, Chuck Schumer and the rest would be criticizing him, saying “it should be less.” 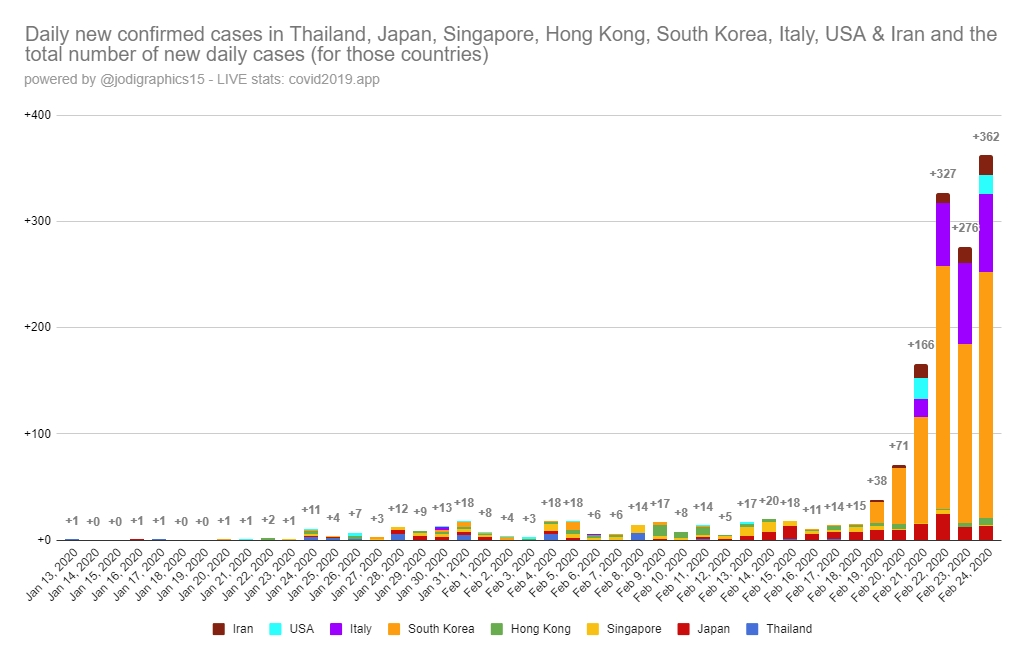 For those who have been watching, CNBC has been talking up a storm about the drugmaker Moderna, which delivered its first experimental coronavirus vaccine for testing, with the clinical trial slated to start in April. The WSJ is supposedly one reason why market’s are clinging to optimism on Tuesday.

The CDC’s Dr. Fauci praised the development, said “nothing has ever gone that fast.”

“Going into a Phase One trial within three months of getting the sequence is unquestionably the world indoor record. Nothing has ever gone that fast,” Dr. Fauci said.

Finally, Austrian health officials have confirmed that at least one of the likely coronavirus patients isolated Tuesday was an Italian living in the country.

This comes after Italian authorities reported the first coronavirus case in the country’s south: a tourist visiting Sicily who had traveled from Bergamo, an Italian city in the Lombardy region.

Update (0825ET): Bahrain has banned its citizens from traveling to Iran as it reports 9 new cases of coronavirus, raising the total cases in the tiny island kingdom to 17 in the span of 24 hours.

Update (0800ET): With his reputation under fire and his popularity slipping, PM Giuseppe Conte said Tuesday that he’s confident that the measures his government has put in place will contain the contagion in the coming days. 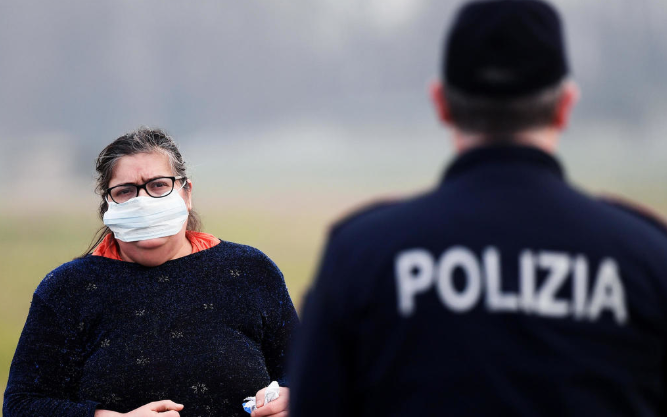 This comes after the PM admitted that a hospital in Lombardy inadvertently helped spread the virus by not adhering to certain health-care protocols. The PM has blamed the hospital for the outbreak in the north, raising questions about whether “the European nation is capable of containing the outbreak,” according to CNN. To put things in perspective, Italy now has 3x the number of cases in Hong Kong.

“That certainly contributed to the spread,” Conte said, without naming the institution concerned. The infection has been centered around the town of Codogno, around 35 miles south of Milan.

“Obviously we cannot predict the progress of the virus. It is clear that there has been an outbreak and it has spread from there,” Conte told reporters, referring to the hospital.

A team of health experts from the World Health Organization and the European Center for Disease Prevention and Control arrived in Italy on Monday to assist local authorities while some 100,000 remain under an effective quarantine.

Over in India, Trump added to his earlier comments by saying a vaccine is “very close”, even though the most generous estimates claim we need another year.

Market experts cited a WSJ report on a possible vaccine as helping market sentiment, though even that report made clear that human tests of the drug are not due until the end of April and results not until July or August.

Update (0650ET): It’s not even 7 am in the US, and it looks like a new outbreak is beginning in Central Europe.

Local news agencies report that Croatia has confirmed its first case, while the Austrian Province of Tyrol has confirmed two cases.

In South Korea, meanwhile, officials have just confirmed the 11th coronavirus-linked death, a Mongolian man in his mid-30s who had a preexisting liver condition.

Over in India, where President Trump is in the middle of an important state visit with the newly reelected Prime Minister Narendra Modi, the president struck an optimistic tone once again claiming that the virus will be a “short-term” problem that won’t have a lasting impact on the global economy.

“I think it’s a problem that’s going to go away,” he said.

Trump also reportedly told a group of executives gathered in India that the US has “essentially closed the borders” (well, not really) and that “we’re fortunate so far and we think it’s going to remain that way,” according to CNN.

Meanwhile, SK officials announced they’re aiming to test more than 200,000 members of the Shincheonji Church of Jesus, the “cult-like” church at the center of the outbreak in SK.

Last night, a post written by Paul Joseph Watson highlighted commentary from a Harvard epidemiology professor (we realize we’ve heard from pretty much the whole department at this point in the crisis, but bear with us for a moment) who believes that, at some point, ‘we will all get the coronavirus’.

Well, up to 70% of us, but you get the idea: The notion that this outbreak is far from over is finally starting to sink in. Stocks are struggling to erase yesterday’s losses, with US futures pointing to an open in the green after the biggest drop in two years. More corporations trashing their guidance, and more research offering a glimpse of the faltering Chinese economy (offering a hint that all the crematoriums are keeping air pollution levels elevated even as coal consumption and travel plunge) have seemingly trampled all over the market’s Fed-ensured optimism.