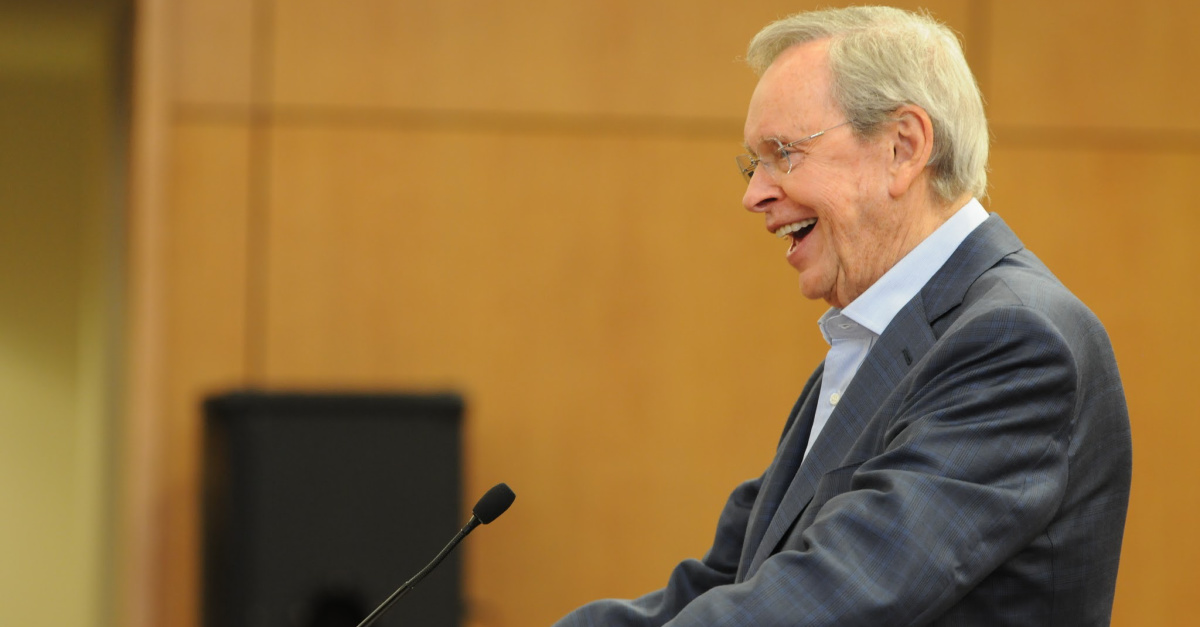 The time demands of whom some have called “America’s Pastor” caused my sit-down interview with Dr. Charles Stanley to take some time to coordinate. Still, as soon as Dr. Stanley walked in to greet me in his InTouch Headquarters in Atlanta, Georgia, his calming spirit made me feel valued and like our conversation was just as important for him as it was for me.

Stanley, who turns 88 this year, is still a man with a mission to win and influence people for Christ. He is quiet and fully aligned with the belief that he’s been called to do one thing—follow Jesus, wherever He may lead.

When asked why he thinks people admire him the way they do, he’s quick to point out that it’s because of Jesus. “I can remember a lady flying from China to Atlanta, just to come watch me preach years ago. That’s when it hit me that God is using me all around the world for Him.” Even as we stood in his office, he received a camera from a woman in Budapest, thanking him of the impact he’s had on her life.

In his wildest dreams, he never thought that he’d be preaching all around the world, yet in his early years at First Baptist Church in Atlanta, he remembers asking himself “How am I going to get this message outside of these four walls?” He added, “You see, you have to understand that when I went to seminary, we didn’t even have a TV.”

According to Stanley, the InTouch program started because a man in the church asked if Stanley would be open to doing a live 30-minute program called the Chapel Hour each week. As the saying goes, the rest is history.

Although Stanley realizes InTouch reaches the world, he’s very humble in attributing any success of the program to Jesus. He has held fast to his perspective or years—that if you “Obey God, and leave all the consequences to Him,” things can get very exciting and the story of Jesus can spread.

Dr. Stanley has preached faithfully for the past 50 years at First Baptist, often without notes. When I asked about his sermon preparation, he shared, “I know where I’m going and headed during my preaching time because TV time only allows me thirty minutes. I will place markers in my Bible to remind me of where I need to go.” He also remarked, “I pray and ask God to show me where the subject and specific objective of the text is, and once I have the outline in my head, I feel like I’m ready.”

Even after all these years Stanley still enjoys preaching. “I love and look forward to every Sunday. I know that I’m going to speak the truth and the truth will change people’s lives. And I know that my message is going all around the world.”

Although Stanley is best known for his pastoring and preaching ministry its quickly noticed that when the word “Dad” is mentioned, his face lights up. This is a title that Stanley loves having. As the father of two children, Becky and Andy – another influential pastor – he clearly loves his children.

“When they were younger and needed something, I would drop everything to listen to them, no matter what was going on,” Stanley recalled.

Stanley’s own father passed away when he was nine months old so he understands first-hand the importance of a father and committed himself to be the best father he could be to his own children.

“I made sure that I played with them as much as I wanted my father to play with me if he had been alive.”

Stanley then recalled family trips sharing, “We would go on vacations and load up the Winnebago and take trips. I gave my children the best that I could.”

Becky is a real estate agent and, as many know, his son Andy pastors the influential North Point Community Church. Stanley sees what both Becky and Andy do as important. When asked if he was surprised when Andy told him that he was going into ministry, he says he wasn’t.

“At one point in his life, Andy got hot with playing the piano and other stuff, but I began to pray for God to open his eyes and he did,” the prominent pastor shared.

Stanley loves his children and is proud of what they’ve both accomplished.

A MAN OF FOCUS

Dr. Stanley is very engaged in the direction of the future of the American church and is eager to talk about it when asked. He believes that if churches are going to grow, they have to do it with the infallible word of God and in meeting people’s needs.

He sees the role of the local church pastor as critical to this.

“It’s a responsibility, to all those who are called, to be sure that [they] are delivering messages that meet people’s needs,” he said.

It’s easy to tell that he’s passionate about the role of the pastor. “The pastor should have a relationship with God, that makes it possible to hear from Him, to know what to speak to people,” Stanley asserts.

There has been one constant drumbeat throughout our conversation, Jesus—being able to hear and obey Him.

Stanley is working on an upcoming book on, “how to pray when you don’t know what to pray.”

This is fitting as Stanley firmly believes that everything comes down to our communication with Jesus.

Many of his fans know and follow his hobby of photography. His pictures are displayed throughout the InTouch building. It’s something that he loves to do. When you look at Stanley’s pictures you can see his eye and focus on what he is taking his picture’s subject matter. The same can be said of his relationship with God, his focus on having the right relationship with his Heavenly Father. This reflationary focus explains why so many people around the world let him into their homes every week.