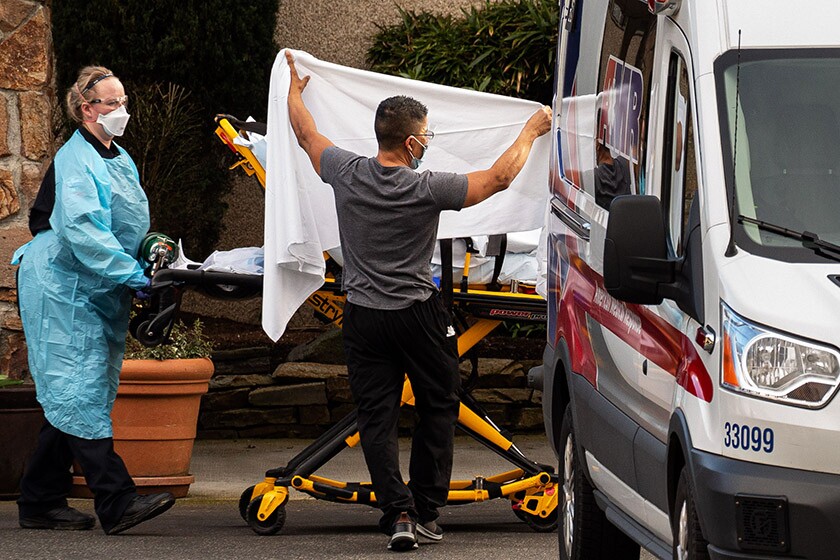 Such is life in Kirkland, Wash., the suburb just east of Seattle known for its folksy downtown and spectacular lakefront views, but now above all as the U.S. epicenter of COVID-19.

Of the 11 U.S. deaths from the coronavirus epidemic, eight were residents of a local nursing home that is struggling to care for others who may have been infected. An additional death occurred at a Kirkland hospital.

“I can’t kiss my kids,” said Hamid Dabbaghian, a 48-year-old cashier at the Kirkland Whole Foods who recently moved here from Iran and feared catching the virus from customers. “As a newcomer to the U.S., I’m worried about my family, and worried that if I die, what will they do.”

Others in this city of 90,000 remain nonchalant or fatalistic, expressing sympathy for those who have died but determination to carry on.

“It’s not the Holocaust. It’s not Armageddon,” said Doug Evanson, 57, an Uber driver who frequently drops healthcare workers at the nursing home. “I don’t get why I need to go out and buy cases of drinking water when I can just turn on the tap.”

Kirkland is an upscale suburb on the east shore of Lake Washington, with sunset views over the water and the tops of Seattle towers beyond. Its downtown features art galleries, whimsical sculptures, a marina and a Little League baseball field.

Like many cities in the area, it’s undergoing rapid growth and gentrification, with condominium construction and rising real estate prices. It has a Google campus and Northwest University, a Christian liberal arts school.

Residents awoke Saturday to the news that a man in his 50s with underlying health conditions had died from the virus the previous day at the city’s EvergreenHealth Medical Center.

At the time, it was thought to be the first U.S. death from the outbreak, but officials have since announced that two infected residents of the nursing home, Life Care Center of Kirkland, had died two days earlier.

Alarm grew as national news crews converged on the nursing home, where firefighters had been called to transport critically ill patients to the hospital.

“This is definitely scary,” said Silas Kropp, 43, after returning Sunday to his apartment next door to the nursing facility. He had spent the previous night scrubbing disinfectant throughout the Dollar Tree store where he works.

Cars slowed in front of the nursing home as television reporters prepared for stand-ups. Neighbors stood in knots of three or four, looking up as cars drove by.

“People drive up and stare at us, like we’re in a quarantine museum,” said Stephanie Windle, 36, a next-door neighbor of the nursing home.

Bonnie Holstad stood outside the facility holding a handwritten sign expressing concern for her husband, one of more than 100 residents at the facility.

“No one at Life Care is answering the phones,” it said. “He needs to be attended to … what is his temperature?”

Ken Holstad, who has Parkinson’s disease and dementia, moved into the center after breaking his hip in a fall. His wife said he was coughing.

As of Wednesday, six Life Care residents and a woman who works there were hospitalized in Kirkland, some of them in critical condition, officials said.

On Monday, the city reported that two police officers and 27 firefighters — a quarter of its Fire Department — had been placed in quarantine after being exposed to patients from the nursing home.

On Tuesday, the U.S. death toll jumped to nine, eight of those in Kirkland. That afternoon, Erica Barlow, an insurance marketing manager, kept her distance from other parents waiting outside Peter Kirk Elementary School to pick up their children.

Barlow smiled as her boyfriend’s 8-year-old son, Holden Weihs, ran toward her. Holden’s father, Ken, is a Kirkland firefighter, she said. He has not been quarantined but has been working overtime to cover for those who have.

“I am very concerned about him as a first responder,” Barlow said. He and other firefighters answering calls involving people with respiratory symptoms put on gloves, face masks and eye protectors.

“I do wish people would take this more seriously,” said Barlow, who had seen social-media posts lampooning people for going to extremes with precautions. “It’s not a snow day. It’s something we could actually control if we followed more of the guidelines.”

Residents with underlying health conditions are taking the situation especially seriously. Marco Safaeian, 50, a chiropractor with severe asthma, worried about his vulnerability and that of his son, who also has asthma.

“I’m afraid if I get this kind of disease, it’s going to kill me,” Safaeian said. “A lot of people I’m sure got infected, and they’re everywhere.”

One Kirkland business doing a brisk trade during the outbreak is Herban Wellness, a downtown store selling natural remedies. Owner Katya Difani, an herbalist, said her sales have jumped 70% since Saturday, with rising interest in immunity boosters and natural sanitizing spray.

“A lot of my customers who are coming in are saying, ‘I’m not being fear-based; I just want to be prepared,’” Difani said.

Down the street, stylist Rita Dadyan stood in the Shop, a hair salon whose business has plunged. She took a more casual attitude than many, saying she was doing little more than washing her hands frequently.

Barlow said she was canceling work travel and making contingency plans in case school closes for Holden and his sister, Emma, 5. Barlow turned 46 on Wednesday, and planned a different kind of birthday celebration.

“I don’t think we’re going to go out to dinner,” she said. “I kind of prefer to stay inside.”