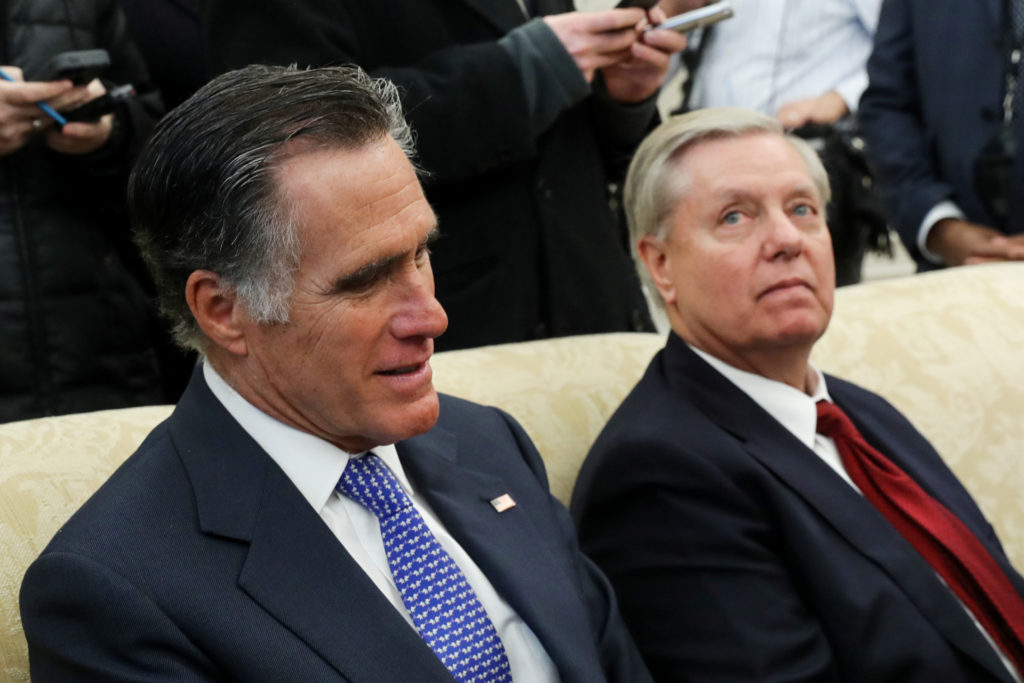 A couple of stories converged to highlight the effective destructive threat against weak Republicans from the leftist cultural Death Star.

Mitt Romney received a standing ovation at the University of Denver for his impeachment conviction vote against President Donald Trump.  At about the same time, Lindsey Graham tweeted a gushing congratulations message to Joe and Jill Biden after the South Carolina primary.

Romney, no doubt, thought being applauded by a room full of indoctrinated students who believe that Republicans are evil was wonderful and a testament to his integrity and the incredible strength of his character.  That his vote provided leftists even more cover for their toxic worldview, no doubt, failed to cross his mind.

It is comically sad when a NeverTrump dumpster fire thinks he is something more than a quisling collaborator basking in the temporary praise of leftists who would never actually vote for him, other than perhaps as an attempt to elevate a weak Republican during a primary.

Perhaps still drunk on the praise from the left, Romney followed up his shameful impeachment vote by criticizing the Trump administration for not being prepared to respond to the coronavirus.

In some ways, this was worse.  While politicians are certainly entitled to misguided opinions, a wise person understands how his comments will be used and the weaponized effects they could produce.

Safe in his red Utah cocoon, Mr. Picture of Courage surely understands he is helping Democrats in their attempt to Katrina the president and weaken other Republicans.  This is their absolute best hope at this point.

So far, the Democrat coronavirus critiques Romney is trying to aid have had all the seriousness of a toddler’s tantrum, with Indian Princess the Zombie-Slayer’s declaration of war on Trump’s “racist wall” perhaps the sharpest critique, since every sane person knows that the best way to fight a disease is to eliminate borders while overwhelming the system.

But, under the guidance of the media, that same cultural Death Star seeks to emotionally wear down the public and damage the economy.

As with the impeachment scenario, Romney offers the Democrat-media TDS crowd a fig leaf of respectability, since they are thrilled to add that even Republicans are unhappy with the administration’s response.  Romney offered himself as a willing tool in this leftist project, where the ultimate goal is the election of a leftist Democrat.

Romney should also understand that aiding this narrative can be extremely damaging and produce the net effect of landing an abortion-worshiping leftist in the pocket of Marxists in the White House, one who is making googly eyes at the ode to societal collapse known as the Green New Deal.

Based upon the positions Joe Biden staked out during the primary, the difference between a Biden and Bernie Sanders presidency will largely be invisible to the naked eye.  Biden, who has served as the poster child on how a person of limited intellect and ruthlessly bad instincts can engorge himself on corrupt cash as a career of “public service,” is actually worse on some issues, something Lindsey Graham also doesn’t seem to grasp.

Sanders is the effect of the Marxification of the Democrat Party and not the cause of it.  That same disease shaped Biden’s platform in his bid to remain relevant.

Graham, shortly after appearing at a Trump Rally in South Carolina, sent his ridiculous text that read, “Congratulations to Joe and Jill Biden, and the entire Biden team, on the well deserved big win in the #SCDemocraticPrimary. Best of luck in the future. #Socialism goes down hard tonight in South Carolina.”

A simple congratulations would have been fine, but the entire corrupt Biden team?  Really?  And how exactly was it well deserved when nearly all of his success was orchestrated by a desperate Machiavellian establishment?  Best of luck?

This is nonsense.  Socialism did not go down hard.  Marxism remains the animating energy of the left.

Romney and Graham suffer from the same disease, although Romney’s is admittedly closer to terminal.  That disease is cultural surrender.

There is a gravitational pull from a relentlessly liberal culture that rewards anyone who collaborates with Democrats and criticizes Republicans.  John McCain made a career out of it, with Graham as his sidekick.  Romney is his natural heir.

Romney’s constituency is no longer Republicans.  It is the media and, as a corollary, leftist America.

The media-academia-celebrity-bureaucratic cultural juggernaut has become a repugnant, godless, American-hating, and racist toxic blob that destroys everything good in its path.  Indeed, being an effective Republican necessitates being despised by that culture and under constant attack from the cultural heights.  Effective Republicans must actively and persistently battle the Democrat cultural juggernaut just to hold ground, let alone to make real progress.  It takes courage, strength of character, and a firm belief in principles.

Far too many Republicans fail this test.  Too often, they are like mosquitoes being pulled into a fluorescent bug-zapper, enamored of the pretty shiny light and oblivious to the fact that they are doing exactly what the left wants: making it easier for them to zap to a crisp all the principles those Republicans claim to stand behind.  This is how you wind up with former Tea Party congressman Joe Walsh waxing poetic in the Washington Post about how the best way to advance conservative principles is to elect a Marxist madman.

Graham is a little more subtle in that he wants to have it both ways.  He knows he needs conservative voters to stay in office, so he has his occasional strong moments, such as when he stood for Brett Kavanaugh against the evil assault against him, easily his best moment.

Like Romney, he likes the positive press coverage a little too much and wants to remain in the in-crowd with a reserved spot at the trough.  He won’t take any real action that would harm the Democrats since he remains the same “go along to get along” person who was formerly John McCain’s sidekick and friend to Joe Biden.

To borrow a phrase from C.S. Lewis in The Abolition of Man, these are men without chests, people of changing principles who easily fall victim to relativism and the crazy cultural pull of the left.  Lewis certainly sounds as though he could have been talking about Romney, Graham, and far too many of their colleagues when he observed, “Their heads are no bigger than ordinary: it is the atrophy of the chest beneath that makes them seem so[.] … We make men without chests and expect of them virtue and enterprise.  We laugh at honour and are shocked to find traitors in our midst.”

Democrats are now so hopelessly compromised that they are no longer capable of shocking the conscience.  The same toxic and overwhelming cultural magnet that pulls weak Republicans toward it keeps all Democrats locked firmly in place, which is why there are no more moderate Democrats and they always vote as a bloc on anything of significance.  Fear of that cultural Death Star is a powerful motivator that keeps compromised politicians in line.

One of the great lessons of the last three years is that we need to elevate principled fighters willing to attack the left’s corrupt cultural power head on.  President Trump demonstrated that it can be done, which is why he has such high approval among Republicans.  But he needs a lot more help, which he is not going to get from far too many Neville Chamberlains still in the party seeking to sue for peace with an ideological monster.