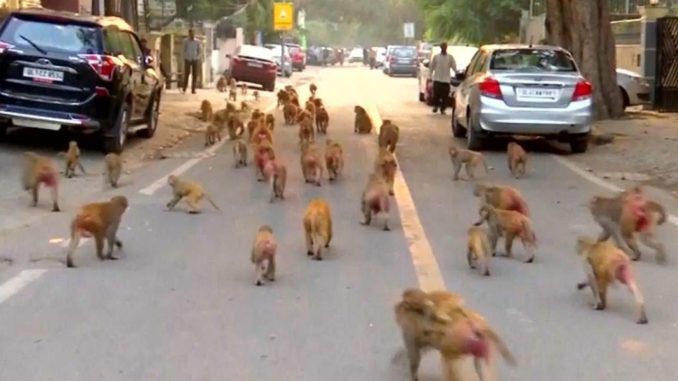 The Indian government is waging war on troops of marauding monkeys who have taken over government buildings and offices, as desperate officials officers use homemade slingshots from fallen tree branches.

Punjab and Haryana Civil Secretariat headquarters in Northern India, which is home to cabinet ministers and bureaucrats, has been overrun by opportunistic macaques, who are said to climb into offices via balconies.

Meanwhile security guards based on site say they are being distracted from their work by the red-faced primates but are unable to deal with the invasion while at their stations.

The Indian Express reports: “The Punjab and Haryana Civil Secretariat, which houses the offices of chief ministers of both states, the cabinet ministers and the offices of top bureaucrats, has literally been taken over by monkeys.”

The Daily Star reports: Despite attempts to rid the head quarters of the menace, the paper reports the situation has become so bad guards have taken to “avoiding eye contact” or running away to avoid provoking them.

A senior central Industrial Security Force (CISF) official told local media who guard the building said: “The other day, one monkey caught hold of my jacket from behind. I did not turn and kept moving. The monkey went away.”

An official from Punjab’s administration department told the Indian Express, CISF officers are so desperate they are using homemade slingshots from fallen tree branches.

“We had offered that we can provide them professional slingshots,” said the official added.

A CISF spokesman is now calling on the government to employe full-time monkey catchers, citing concerns over the safety of using slingshots.

He said: “It is not CISF’s duty to shoo away the monkeys. Our duty is to stop any intrusion or any terrorist attack. How can we stop or shoo away monkeys?

However local reports say traditional monkey management methods have so far failed and the monkey population is getting out of control.

Last year the Punjab government wrote in desperation to the Chandigarh Chief Conservator of Forests & Wildlife Warden appealing for two permanent “wildlife rescue staff”to be staged at the offices during working hours.

As part of the action plan human langur monkey mimics were brought in scare the smaller macaques away but they soon became wise to the tactic.

Resourcing shortages have also made the plan for full-time monkey police impossible, the head of the nearby Chandigarh Deputy Conservator of Forests and Wildlife Dr Abdul Qayyum said.

Dr Qayyum told The Indian Express: “We have a team of about a dozen and we have 40 locations in the city to cover.

“Once a complaint is made, the team members reach the spot within 30 minutes. It is practically not possible to station two team members at one place.

Dr Qayyum added he blames food litter in the offices and surrounding areas for attracting the pests.

One thought on “Monkeys Have Taken Over Gov’t Buildings In India, Officials Using Slingshots To Defend Themselves”