Wedbush analyst Daniel Ives called the decline of iPhone sales in China a “doomsday type” like decline. Ives said the fall was an “unprecedented” drop and was “not surprising given the essential lockdown that most of China saw” in February.

Wedbush expects Chinese demand to come back online in the second half of the year.

We’ve explained that economic paralysis in China started in early February and continues to this day.

Alternative data first showed us the incoming economic crash developing in early February, only to be confirmed weeks later. Twin shocks plague the Chinese economy, which is a supply shock with manufacturers operating at less than full capacity, along with a demand shock, where consumers have been confined to their homes in forced quarantine, unable to spend.

So, on Monday morning, when new data from the China Academy of Information and Communications Technology (CAICT) reveals Apple smartphone sales in China were halved in February, this really shouldn’t surprise ZeroHedge readers, considering they’ve been well informed about what would happen next. 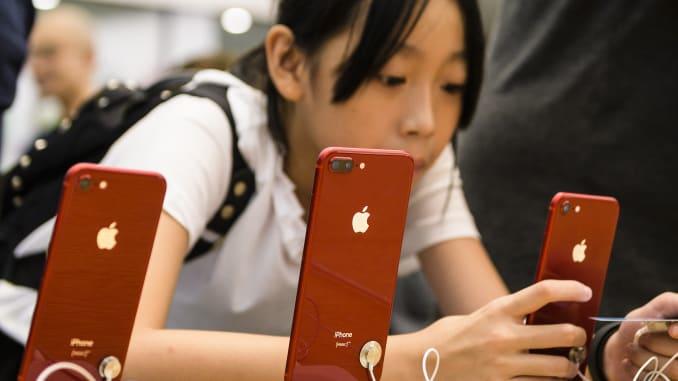 And it wasn’t just Apple with plunging activity, all mobile phone brands operating in China saw shipments halved over the month.

CAICT said 6.34 million devices were shipped last month, down 54.7% from 14 million in the same month the previous year. This was the lowest level of February shipments since 2012, when the CAICT data first became available.

Android brands, including Huawei and Xiaomi, accounted for most of the drop, collectively saw shipments at 5.85 million units for the month, compared to 12.72 million units last year. Apple shipped 494,000 last month, down from 1.27 million in February 2019.