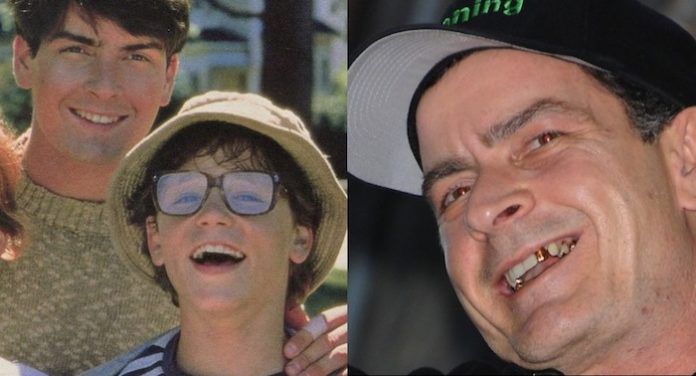 Feldman’s tell-all expose was supposed to premiere on March 9, 2020, to internet users worldwide. However, due to online technical difficulties, only those who were able to physically attend the Los Angeles premiere actually saw the film in its entirety.

According to Los Angeles Times reporter Amy Kaufman, Feldman alleges that Sheen raped Haim on the set of “Lucas” in broad daylight between two trailers.

“In #MYTRUTHDOC, @Corey_Feldman alleges that Corey Haim told him he was raped by Charlie Sheen on the 1985 set of ‘Lucas’,” Kaufman tweeted shortly after the screening.

“Sheen has denied this claim previously and does not issue a new denial in the film. In the film, Feldman says Haim told him he was bent over by Sheen in broad daylight between two trailers and sodomized.”

“Crisco oil was allegedly used as [a] lubricant,” she added.

In #MYTRUTHDOC, @Corey_Feldman alleges that Corey Haim told him he was raped by Charlie Sheen on the 1985 set of "Lucas." Sheen has denied this claim previously and does not issue a new denial in the film.

Sheen has previously been accused of raping teenage Corey Haim, but has vigorously denied the allegation.

Good friend of Haim, Dominick Brascia, claims that Haim confided in him about the rape shortly before he died in 2010, and attributes the trauma as a trigger that led to his death at just 38-years-old.

Sheen is also accused of preying on several other underage children connected to the ‘Lucas’ film.

“Corey was so confused by the sexual encounter he believed, like so many victims, he was ‘in love’ with his abuser,” one witness told The Enquirer.

According to Sheen’s ex-wife, the actor is allegedly “obsessed” with watching child pornography.

“I told him I discovered some pornography website that he belongs to which I found very disturbing (websites which promoted very young girls, who looked underage to me with pigtails, braces and no public hair performing oral sex with each other),” ex-wife Denise Richards said, according to court documents. “I also told him about other websites I discovered that he accessed involving gay pornography also involving very young men who also did not look like adults.”

Meaww.com reports: Feldman also spoke of the alleged incident in his 2013 tell-all book ‘Coreyography: A Memoir.’ “At some point during the filming [of ‘Lucas,’ Haim] explained an adult male convinced him it was perfectly normal for older men and younger boys in the business to have sexual relations, that it was ‘what all guys do,’” Feldman wrote.

“So they walked off to a secluded area between two trailers during a lunch break for the cast and crew,” he continued, “And Haim, innocent and ambitious as he was, allowed himself to be sodomized.”

However, Sheen was never named in Feldman’s memoir.

“I’m not a huge fan of Charlie Sheen… especially the way he’s affected other people that I know,” Feldman said of the Hollywood veteran in 2011, adding that his friend Haim had “fought for his entire life to recover from those early experiences and to get his life together.”