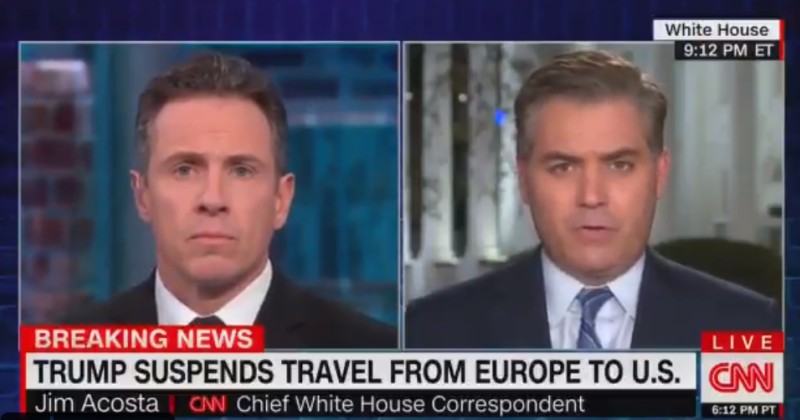 CNN’s Jim Acosta bitterly complained last night that President Trump referring to Covid-19 as a “foreign virus” was an act of “xenophobia.”

Because according to some, people’s feelings being hurt is still an infinitely bigger threat than a deadly pandemic.

“The president referred to the coronavirus as a “foreign virus,’” Acosta said following Trump’s Oval Office address to the nation Wednesday night. “It’s going to come across to a lot of Americans as smacking of xenophobia to use that kind of term in this speech.”

There's a global pandemic, all European travel to the U.S. has been shut down, yet Jim Acosta is more concerned about Trump being 'racist' for calling it a "foreign virus."pic.twitter.com/l27ZQzty9s

Acosta also whined that Stephen Miller, a hardliner against mass immigration, probably had a hand in writing Trump’s speech.

Mike Cernovich pointed out that Acosta himself had referred to the foreign origin of the virus in a tweet.

Trump is of course correct, coronavirus is a “foreign virus” and it did originate in Wuhan, China.

For at least a week, some media talking heads have been asserting that calling coronavirus the “Wuhan virus” is “racist” despite the term being completely accurate.

Let’s not forget that Acosta’s colleagues at CNN also repeatedly referred to Covid-19 as the “Wuhan virus.”

Democrats are sadistically using the Wuhan Virus as a weapon in their fight for political power.

These same Democrats are also attacking anyone who calls COVID-19 the “Wuhan Virus.”

Funny, I wonder who was it who first used the term “Wuhan Virus”?