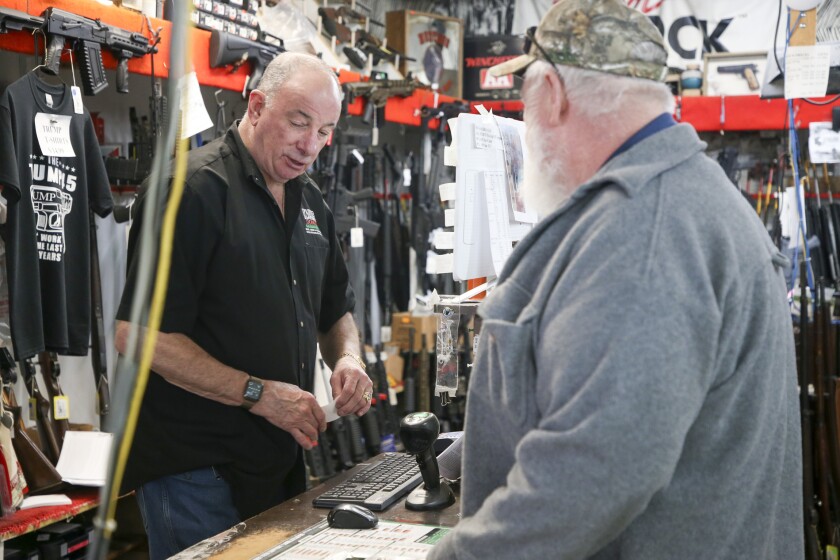 David Stone snagged a cardboard box of .223-caliber ammunition from the shelf and slid it across the glass countertop, offering his go-to sales pitch: “Welcome to the biggest selection of ammunition in all of Oklahoma.”

“I’m not sure I can keep on saying that,” Stone said, explaining that the supply of goods at Dong’s Guns, Ammo and Reloading has been seriously depleted over the last few days.

“When I say sales have been booming,” he said, “it’s an understatement.”

Gun sales are surging in many U.S. states, especially in those hit hardest by the coronavirus — California, New York and Washington. But there’s also been an uptick in less-affected areas, with some first-time gun buyers fearing an unraveling of the social order and some gun owners worried that the government might use its emergency powers to restrict gun purchases.

Stone’s packed store shares a small strip of road with a church, a cemetery and another gun shop, and in recent days he has sold several firearms to truckers traveling along Interstate 44 here in Oklahoma. One trucker, who was headed to Arizona, bought $2,500 worth of firearms and ammunition, and another trucker, who was headed to Illinois, dropped $200 on ammunition alone.

“You got to be protected for all sorts of stuff,” Stone said. “Seems like the world has gone mad.”

In California, would-be customers formed a long line outside the Martin B. Retting gun shop in Culver City on Sunday, just as others had Saturday.

“Politicians and anti-gun people have been telling us for the longest time that we don’t need guns,” said John Gore, 39, part of the crush of customers Saturday. “But right now, a lot of people are truly scared, and they can make that decision themselves.”