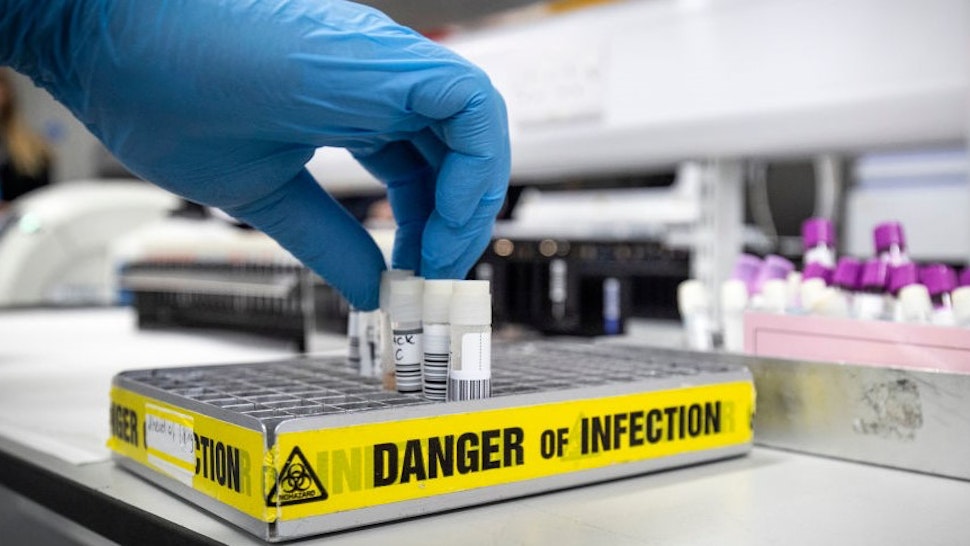 But they were fake.

“The parcel arriving from the United Kingdom this week was declared as purified water vials valued at nearly $200,” the Associated Press reported. “But when U.S. Customs and Border Protection inspected it they discovered the labels referring to the new virus that began in China and has spread globally.”

“The American public should be aware of bogus home testing kits for sale either online or in informal direct to consumer settings,” the customs agency said in a statement on Saturday.

“No further details, including any arrest connected to the intercepted package, were released,” the AP said, adding that the vials were turned over to the U.S. Food and Drug Administration (FDA) for analysis.

Currently, there is no home test for the coronavirus, also known as COVID-19. Only verified state and local public laboratories can conduct coronavirus tests. “As of the evening of March 13, 83 state and local public health laboratories in 50 states and the District of Columbia have successfully verified COVID-19 diagnostic tests and are offering testing,” the Center for Disease Control (CDC) said.

Testing for the coronavirus isn’t easy. Samples must be analyzed in a lab and testing can take at least four to six hours to complete. But several medical testing companies are developing tests that can be analyzed more quickly, although it’s unclear how long it will take to get FDA approval for the tests. The FDA says it is working on fast-tracking testing and approval specifically for coronavirus tests and treatments, however.

While the elderly and very young face dangers from the fast-spreading virus, for most people COVID-19 brings only mild or moderate symptoms, like fever and dry cough.

“Almost all people will recover. Ninety-eight, ninety-nine percent of people will recover,” U.S. Surgeon General Dr. Jerome Adams said Friday. “People need to know that. And we heard a great story on NPR this morning about an 89-year-old from that nursing home facility in Seattle who is recovered.”

President Trump has already taken a test and the results were negative. He had been exposed to at least two people who tested positive for COVID-19 — one at the Conservative Political Action Conference outside of Washington, D.C., and another at a White House event with Brazilian President Jair Bolsinaro.

“Last night after an in-depth discussion with the President regarding COVID-19 testing, he elected to proceed,” according to a statement by press secretary Stephanie Grisham with Trump’s permission. “One week after having dinner with the Brazilian delegation in Mar-a-Lago, the President remains symptom-free. I have been in daily contact with the CDC and White House Coronavirus Task Force, and we are encouraging the implementation of all their best practices for exposure reduction and transmission mitigation.”

Trump said he took the test “only because the press is going crazy. I also took the test last night. And I decided I should based on the press conference yesterday. People were asking, did I take the test?” he said.

On Thursday, Grisham said that both Trump and Vice President Mike Pence “had almost no interactions with the individual who tested positive and do not require being tested at this time.”