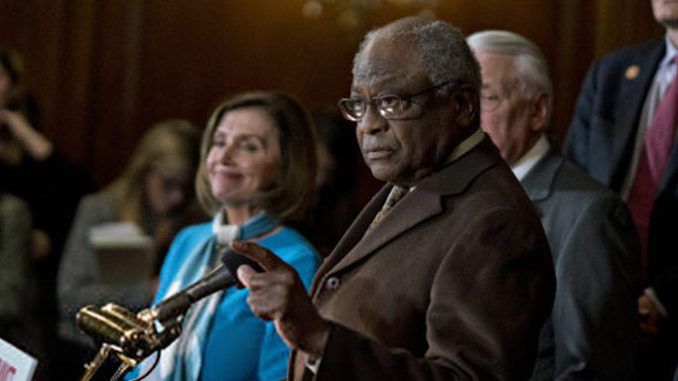 Democratic House Majority Whip Rep. James Clyburn has warned that “racist” President Trump is trying to make the U.S. “go the way of Germany in the 1930s.”

In an interview with Axios on HBO Sunday, Clyburn stated that the Trump administration is strikingly similar to the Nazi Party in 1930s Germany.

The South Carolina Democrat also accused Republicans of acting like Nazi supporters for backing the president.

Rep. James Clyburn, the top-ranking African American in American politics, told “Axios on HBO” that President Trump is a racist who hired white supremacists, warning America “could very well go the way of Germany in the 1930s.”

Why it matters: Clyburn is a force in Democratic politics widely credited for resurrecting Joe Biden’s campaign with his South Carolina primary endorsement. He warned in great detail of what he sees as troubling parallels between America today and Nazi Germany.

Clyburn compared Republicans’ coalescing around Trump to Nazis supporting Hitler amid his rise to power. He argued that falsehoods in Trump’s State of the Union address showcased the issue.

Trump’s State of the Union address, delivered Feb. 4, discussed the coronavirus threat, which many Americans were unaware of at that point. Speaker of the House Nancy Pelosi (D-CA) ripped up the speech when he finished.

Clyburn compared Trump to Adolf Hitler, though he tried to claim that he was not comparing Republicans to Nazis — merely the “dynamics” through which, he said, Germans allowed Hitler to become a dictator.

Clyburn said that Sen. Lindsey Graham (R-SC) was the “poster child” of someone who gave up principles for power.