Two weeks ago, on March 3, before a liquidity panic had gripped capital markets, corporations and global banks, Credit Suisse repo icon and former NY Fed staffer, Zoltan Pozsar issued a recommendation to halt the funding crisis early in its tracks, writing that the Fed should “combine rate cuts with open liquidity lines that include a pledge to use the swap lines, an uncapped repo facility and QE if necessary.” Unfortunately, since then the coronavirus supply chain (and payments) crisis has been joined by the oil price war, which has crippled the petrodollar exchange system by sending the price of oil sharply lower and exacerbating the global dollar funding shock.

And even though the Fed belatedly followed through with all of Pozsar’s March 3 policy recommendations, going so far as throwing a commercial paper bailout facility which was also recommended by BofA’s Marc Cabana (another former NY Fed staffer), the market remains unconvinced that any of this is enough, especially with JPMorgan warning  that the world is facing an unprecedented dollar margin call, as a result of the $12 trillion synthetic dollar short, some 60% of US GDP. 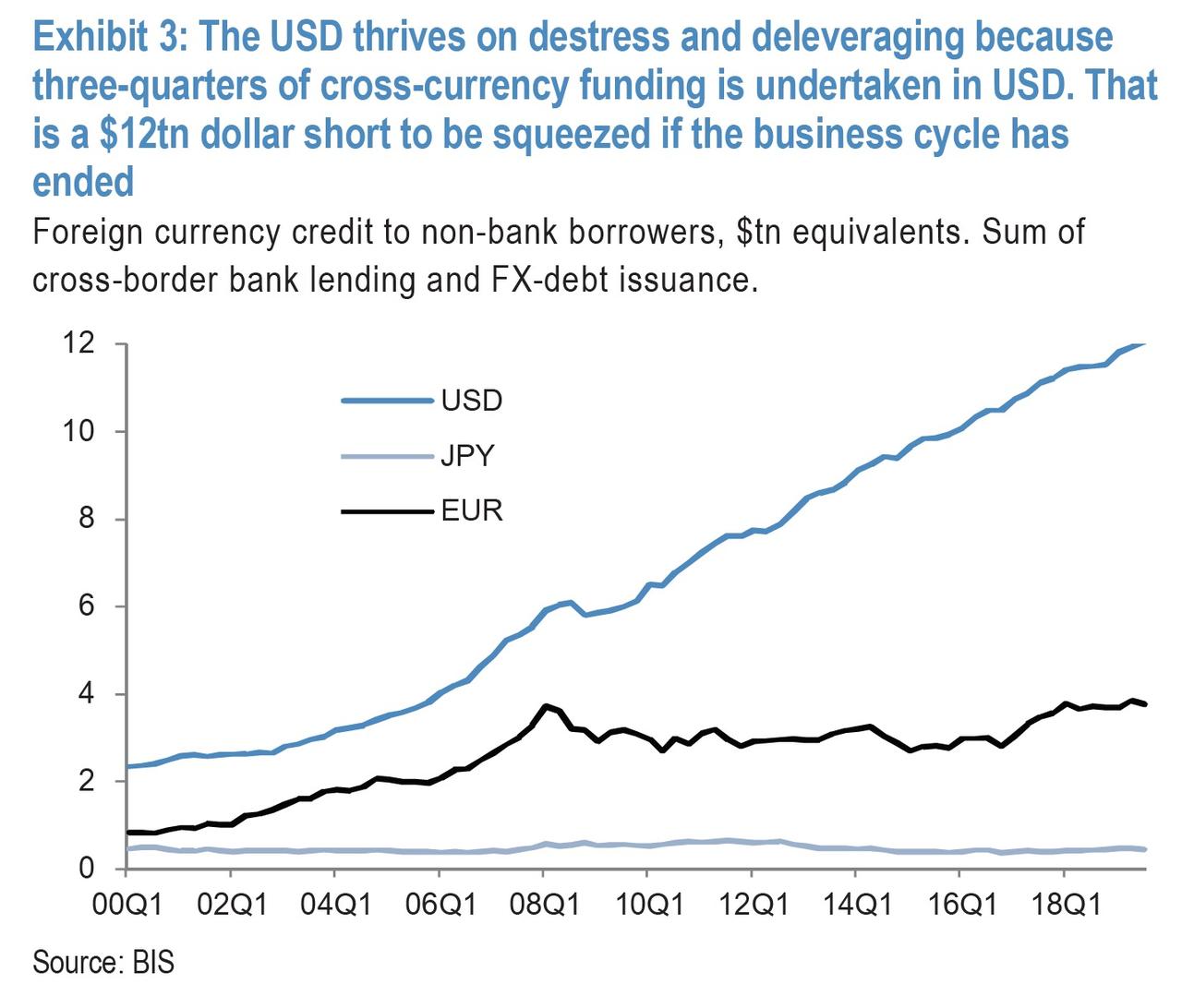 Faced with this unprecedented dollar shortage, the Fed has so far failed to assure the world it can provide all the funding needed. Furthermore, as we said yesterday, in some ways we sympathize with the Fed, as every day something new breaks among this record funding strain:

As we further said, “what the Fed needs is the monetary equivalent of Dr. House: someone who can diagnose what is actually wrong with the monetary plumbing, instead of using the same old shotgun approach of shoveling trillions in blunt liquidity into the market, which clearly is not working anymore.”

Alas, that is not a credible option, meanwhile the Fed’s liquidity injections are failing with the BBG dollar index – the simplest proxy of dollar demand alongside FRA/OIS and FX basis swaps – continuing to surge as various actors rush to procure what, with all due respect to Ray Dalio, is the opposite of trash. 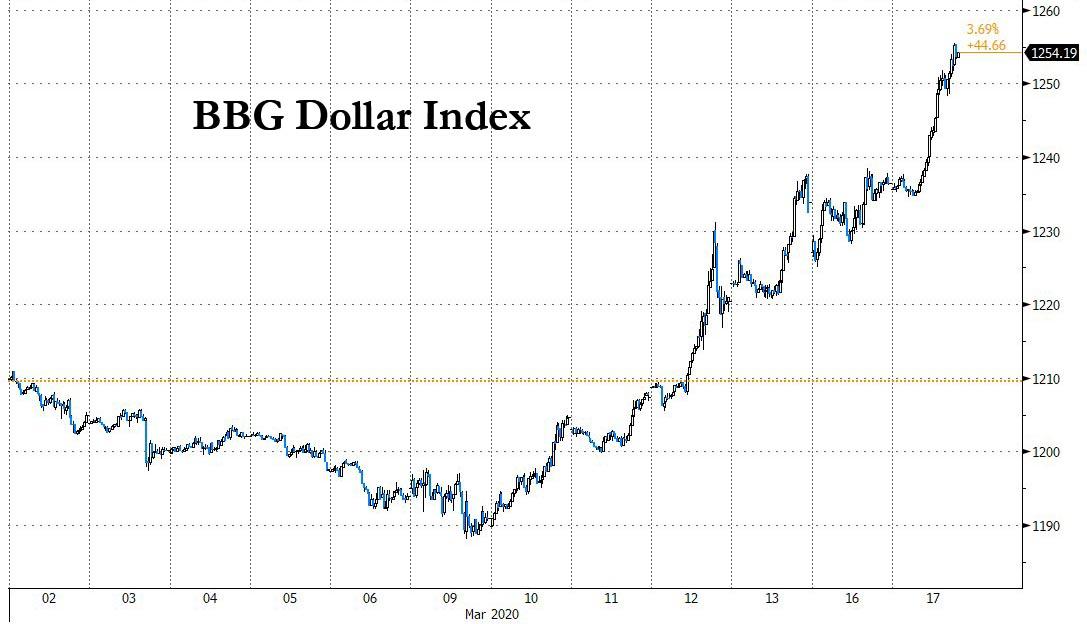 Confirming our take that everything the Fed does, including this morning’s Commercial Paper facility restart, is either insufficient or targeting the wrote underlying cause (today even BofA’s Marc Cabana who pushed for the CPFF slammed it, saying “this facility does nothing to assist the money funds trying to raise cash and address outflows”), is none other than Zoltan Pozsar who in his latest note published this morning, writes that “all segments of funding markets – secured, unsecured and FX swaps – continue to show growing signs of stress”, prompting him to conclude that “the Fed may have to do more still.”

Scratch “may”, and replace with “will”, unless Powell wants to watch the dollar short squeeze go all “Volkswagen” on him.

So what can the Fed do? Well, according to Zoltan, the time for half-measures is over (incidentally, he too panned the Fed’s CFPP writing that “the Fed needs to become a buyer of CDs and CP, but not through the CPFF”), and instead the printer of the world’s reserve currency has to become the bank of last resort not only for US institutions, where access should be expanded to non-banks, but also banker to the entire world in the form of unlimited, 24/7 swap lines open with every central bank, not just the G7.

Below we present a summary of his must read “Fed must act or else” note:

The Fed’s liquidity injections appear not to be working.

All segments of funding markets – secured, unsecured and FX swaps – continue to show growing signs of stress. The Fed may have to do more still.

In the U.S., we watched, but didn’t feel the funding impact of large banks in other countries being asked to help their economies. Now that U.S. banks are asked to do the same, dollar funding markets are starting to feel the impact.

As U.S. banks increase their lending to the real economy as corporations draw on credit lines and banks lend more to households and firms, lending will consume more balance sheet and risk capital, and that will leave less room for market making and arbitrage, which under current circumstances are “luxury”.

The breakdown of o/n repo markets yesterday tell us that balance sheet is now getting scarce to conduct even the most basic type of market making.

As banks are pulling back from market making, the Fed and other central banks need to assume the role of dealer of last resort…

Summarizing the above is simple: Pozsar is basically recapping what we said in “The World Is Hit With A $12 Trillion Dollar Margin Call“, and explains that to fix this potentially catastrophic margin call, the Fed must grant access to virtually every global entity in need of dollars, including those shadow banks which over the past decade scramble to lever themselves to the gills, fully aware that when the day came, the Fed would bail them out.

That day has arrived, and it Pozsar’s proposal is accepted – and in the past everything he has suggested was promptly pursued by the US central bank – it means that the Fed is about to bail out the world.

The repo export than notes that he is most concerned about four key areas which the Fed has so far failed to address:

Going down the list, Pozsar first focuses on the initial shock to the CD and CP markets which he notes came from the equity market collapse and the flows it triggered whereby cash started to flood back from securities lenders’ cash collateral reinvestment accounts to short sellers’ accounts.

Given that secured lenders invest cash in the CD and CP markets and short sellers invest mostly in Treasury bills, these flows turned sec-lenders into net sellers of CD and CP, precisely when issuance from corporations and banks is picking up. Outflows from prime money funds have been small to date, but given ongoing stresses in funding markets and heightened risk aversion, prime funds could see more outflows this week as investors take refuge in the safety of government money funds. Such a rotation would further hurt demand for CD and CP this week and will continue to pressure funding spreads including U.S. dollar Libor-OIS.

This is notable because it explains why Pozsar does not think that the right solution now is to reactivate the CPFF, as the Fed just did:

The legal aspects of onboarding issuers takes time and liquidity can kill you quick. Our recommendation would be for the Fed to come to an agreement with the U.S. Treasury whereby the latter provides a “first-loss buffer” on any financial or non-financial CP the New York Fed buys in the primary or secondary market. The first loss buffer would ensure that the Treasury takes the credit risk and the Fed only takes the liquidity risk such that the Fed feels “secured to its satisfaction” – which is what the Fed cares about most in a crisis situation.

The money to fund such a first loss buffer is already in the system – it’s sitting in the Treasury General Account. Putting up $50 billion of the $400 billion sitting idly at the Fed would provide sufficient comfort for the Fed and near immediate support for the market – the Bank of Japan and the Bank of Canada already buy CP in their domestic jurisdictions.

And since the Fed is now going, all in, Pozsar says that “this template could then be extended to corporate bond purchases by adding more buffer and as President Dudley would say “going out the curve and down the credit spectrum”. And why stop there, after corporate bonds the Fed can also buy stocks, and oil, and baseball cards, and why not fresh air… But not gold, never gold, at least not until the Fed is ready to fully devalue the dollar against the precious metal, which is also coming in the near future. But we digress…

Second, Pozsar is concerned that the Fed’s FX swap lines are now active “but it feels like the operational aspects of it need to be fine-tuned. Currently dollars are being offered weekly, but the FX swap market trades like they should be offered daily, and not only at weekly and three three-month maturities but at ultra-short tenors as well, similar to how the Fed lends in the repo market.”

Third, the swap lines (which we first profiled in late 2009) are open only for banks which is a legacy “fault line in the system.” The swap lines were originally designed to help the funding needs of banks during 2008; they work by the Fed lending dollars to other central banks which then lend it to banks. But since the financial crisis, non-banks eclipsed banks as the biggest borrowers in the FX swap market: a hallmark theme of the post-QE global financial order has been the secular growth of FX hedged fixed income and credit portfolios at non-bank institutions like life insurers and asset managers – the new shadow banking system epitomized by money market funding (FX swaps) of capital market lending (Treasuries and credit).

According to Pozsar, unless these non-bank entities get access to dollar auctions – from local central banks – FX swap spreads may remain wide if banks won’t serve as matched-book intermediaries; in other words, yet another half-baked liquidity bailout which will not reach the target audience. Additionally, there is a growing risk that such intermediation will fracture as the assets that FX swaps fund include not only Treasuries but credit and CLOs too. Credit quality is fast deteriorating across various sectors and that makes it riskier for dealers to fund some life insurers through FX swaps, just like it became riskier to fund some insurers during the 2008 crisis.

As Pozsar puts it, “over the past five years balance sheet and the availability of reserves were the main drivers of spreads in the FX swap market. It’s time to think about credit risk creeping in to funding markets through the asset side of some portfolios funded through FX swaps.” To this we will also note that counterparty risk – especially when a certain massive European bank is involved – is also starting to be a factor when making funding calculations… just like 2008.

Fourth, and final, the repo expert believes that the geographic reach of the swap lines is too narrow. The Fed has swap lines only with the BoC, the BoE, the BoJ, the ECB and the SNB, and that’s because the 2008 crisis hit banks mostly in these particular jurisdictions. But the breadth of the current crisis is wider as every country is struggling to get dollars. The dollar needs of Sweden, Norway, Denmark, Hong Kong, Singapore, South Korea, Taiwan, Australia and Brazil and Mexico seem particularly striking for a variety of reasons.

Scandinavia countries, like Japan have large dollar needs due to institutional investors’ hedging needs and only Norway is endowed with large FX reserves to tap into. Mexico is dealing with a terms of trade shock due to the collapse of oil prices. Southeast Asian countries that serve as banking centers need U.S. dollars to clear dollar payments and countries like South Korea and Taiwan have life insurers with meaningful hedging needs.

Finally, sooner or later, one will also have to include China – and its upcoming dollar maturity wall – to this list.

In short, “the Fed’s dollar swap lines need to go global, the hierarchy needs to flatten.”