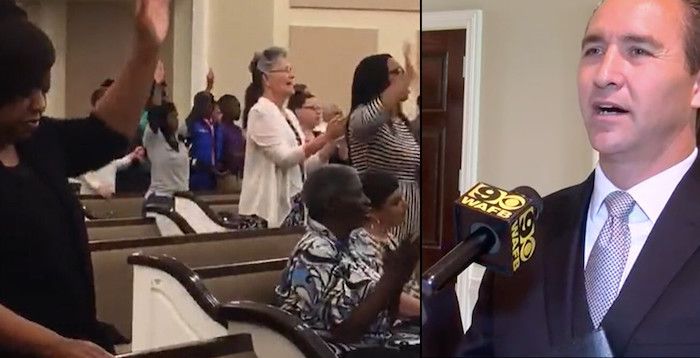 The pastor of a Louisiana church who chose to defy government orders and welcomed hundreds of worshippers into his church service Tuesday evening has been threatened by the authorities.

“We hold our religious rights dear and we are going to assemble no matter what someone says,” said the pastor, Rev. Tony Spell, who believes that our First Amendment rights including freedom of religion and freedom of assembly must be respected under any and all circumstances.

The gathering defied an order by Louisiana Governor John Bel Edwards that bans groups larger than 50 from gathering at any one time, including in churches.

Rev. Tony Spell says police showed up at the church after the service telling him the National Guard would break up any future services with more than 50 people gathered. Rev. Spell says 305 people attended the service to worship the Lord in the sanctuary Tuesday night.

Numerous churches across the state have canceled services until further notice because of the governor’s proclamation, which he says aims to control the spread of the virus.

Tuesday’s service was held at Life Tabernacle Church in the City of Central, located in East Baton Rouge Parish. Rev. Spell says he does not believe his congregation is at risk of getting COVID-19.

“It’s not a concern,” Spell said of the virus. “The virus, we believe, is politically motivated. We hold our religious rights dear and we are going to assemble no matter what someone says.”

Reverend Spell is not concerned with that and boasted he had an even larger crowd this past weekend, days after the governor’s proclamation was issued.

“I had 1,170 in attendance Sunday,” Spell said. “We have 27 buses on Sundays picking up people in a five-parish area,” he said.

Spell says the more than 1,000 people who attended Sunday were in various parts of the church. However, he says a large portion of them were gathered in the main worship area of the church that day.

Gov. Edwards addressed the ban on large gatherings at bars, restaurants, churches, and other places during a news conference Saturday, March 14.

“I’m a person of faith,” the governor said. “I happen to believe very much in the awesome power of prayer. I also believe in science, and the scientists at the CDC say that the measures we are taking will minimize the spread.”

U.S. Congressman Clay Higgins, a Republican from Louisiana, sent a letter to the governor last week saying he believes the limit on the size of church gatherings is unconstitutional.

Former Louisiana state legislator, Woody Jenkins, attended the church service and live-streamed video of it to Facebook. Jenkins, who owns the Central City News newspaper, says he’s a not a member of the church, but supports the congregation’s right to assemble.

“Our attitude is the First Amendment rights rise and fall together: freedom of speech, freedom of religion, freedom of assembly, and freedom of the press,” he said.