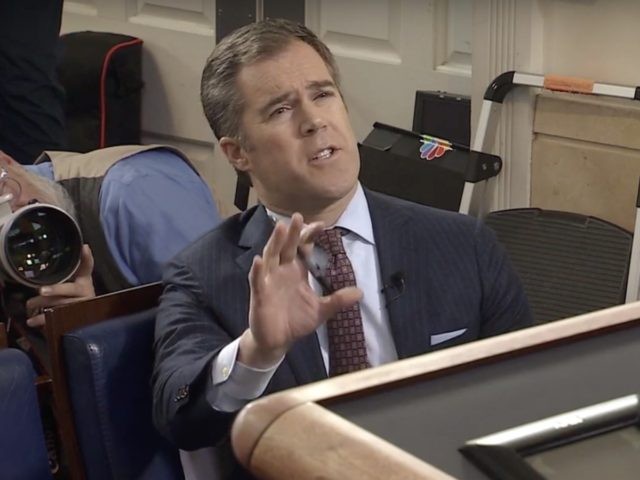 CLAIM: NBC News White House correspondent Peter Alexander claims he asked the president to calm Americans, and he lashed out.

Peter Alexander is attempting to defend himself after being called out by President Donald Trump on national television during a White House briefing on the coronavirus outbreak on Friday.

Alexander claims that he was simply asking the president “to reassure Americans.”

I offered both Pres Trump and VP Pence an opportunity to reassure Americans.

Simple question: “What do you say to Americans who are scared?”

Trump, to me: “I say, you’re a terrible reporter.”

Pence, an hour later: “Don’t be afraid. Be vigilant.”

That is not, in fact, what happened.

Alexander was asking about the president’s effort to promote a drug, chloroquine, that is approved for other uses but that some say can mitigate the effects of the coronavirus. Dr. Anthony Fauci, a member of the president’s team, said Friday that there was no clinical evidence yet of chloroquine’s positive effects, and that the evidence was anecdotal.

Trump reiterated Friday that he was optimistic about chloroquine, largely because it had already been approved for other uses. “I am a man who comes from a very positive school. … And we’ll see how it works out, Peter. I’m not saying it will.” He added that if the drug did help, it would be a “game changer.”

Alexander then pushed back, and the following exchange ensued.

Alexander: Is it possible that your impulse to put a positive spin on things may be giving Americans a false sense of hope, and misrepresenting the preparedness right now —

Trump: Such a lovely question. Look. It may work, and it may not work. And I agree with the doctor, what he said.  May work, may not work. I feel good about it. That’s all it is. It’s just a feeling, right, you know? I’m a smart guy. I feel good about it. And we’re gonna see — you’re gonna see soon enough. And we have certainly some very big samples of people, if you look at the people, a lot of people that are in big trouble. And this is not a drug that obviously, I think I can speak from a lot of experience, because it’s been out there for over twenty years. So it’s not a drug that you have a huge amount of danger with, it’s not like a brand new drug that’s just been created that may t have have an unbelievable, monumental effect, like kill you. We’re gonna know very soon. And I can tell you, the FDA is working very hard to get it out. Right now, in terms of malaria, if you want it, you can have a prescription. You get a prescription. And by the way — and it is very effective. It works. I have a feeling you may — and I am not being overly optimistic or pessimistic. I sure as hell think we ought to give it a try. I mean, there’s been been some interesting things happened, and some very good things. Let’s see what happens. We have nothing to lose. You know the expression, “What the hell do you have to lose?” Okay?

Trump: I say that you are a terrible reporter. That’s what I say. Go ahead. I think it’s a very nasty question, and I think it’s a very bad signal that you are putting out to the American people. The American people are looking for answers, and they’re looking for hope, and you’re doing sensationalism. And the same with NBC and Concast.  I don’t call it “Comcast,” I call it “Concast.” Let me just tell — [for] whom you work. Let me just tell you something. That’s really bad reporting. And you ought to get back to reporting instead of sensationalism. Let’s see if it works. It might, and it might not. I happen to feel good about it. But who knows? I have been right a lot. Let’s see what happens. John? — You ought to be ashamed of yourself.

The question about Americans being scared came after Alexander asked about giving Americans “false hope.” Trump tried to answer patiently, and finally vented his frustration once it seemed that Alexander was trying to emphasize fear, even after his question was answered.

Alexander also contrasted Vice President Mike Pence’s answer with the president’s, as if to show that his question was reasonable, and to make Trump’s answer look bad by comparison.

What Alexander’s tweet omits is that Pence’s answer are much later, after journalists had peppered the president and other officials with a barrage of questions about the president supposedly attacking the media. All of Trump’s aides, including the Pence, backed the president.

Later, Alexander put out a statement in which he claimed to have been asking the president a “softball” question. He speculated that Trump was motivated by “anxiety” about “his political prospects,” and concluded with an attack:

It is all speculative, partisan, and arguably unprofessional.