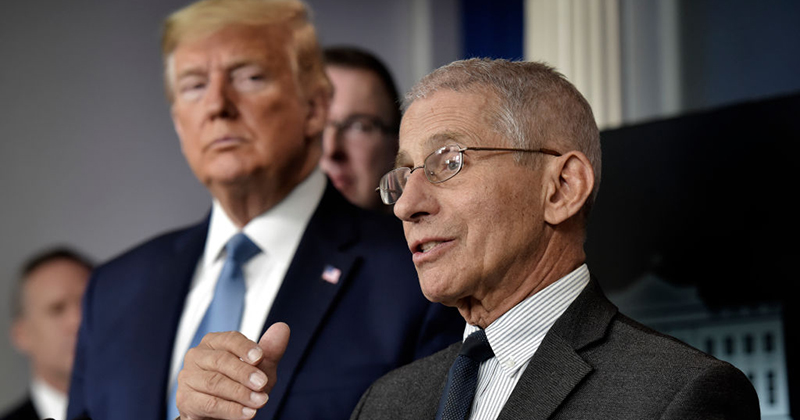 Director of the National Institute of Allergy and Infectious Diseases, Dr. Anthony Fauci, slammed the media Sunday, accusing reporters of constantly trying to sow division between him and President Trump.

Appearing on CBS News’ Face the Nation, Dr. Fauci discussed the issue of Trump making statements about medical matters that the doctor may not be able to back up with science.

Dr. Fauci dismissed the issue as a media campaign to obstruct the coordination of the coronavirus response by continually looking for differences between what the NIAID director and the president both say.

“I think there’s this issue of trying to separate the two of us,” Dr. Fauci said, adding “There isn’t fundamentally a difference there. He’s coming from a hope standpoint. I’m coming from it from a scientific standpoint.”

DR. FAUCI: “The President was trying to bring hope to the people. I think there's this issue of [the media] trying to separate the two of us. There isn't fundamentally a difference there." pic.twitter.com/lSygidey2a

“There’s an issue here of where we’re coming from. The president has heard, as we all have heard, are what I call ‘anecdotal reports’ that certain drugs work. So, what he was trying to do, and express, was the hope that it might work, let’s try and push their usage,” Fauci stated.

“I, on the other hand, am not disagreeing with the fact that, anecdotally, they might work. But my view is to prove, definitively, from a scientific standpoint, that they do work. So I was taking a purely medical, scientific standpoint. And the president was trying to bring hope to the people.” he further explained.

The President tweeted over the weekend regarding a potential combination of the drugs Hydroxychloroquine and Azithromycin as a possible treatment for the virus.