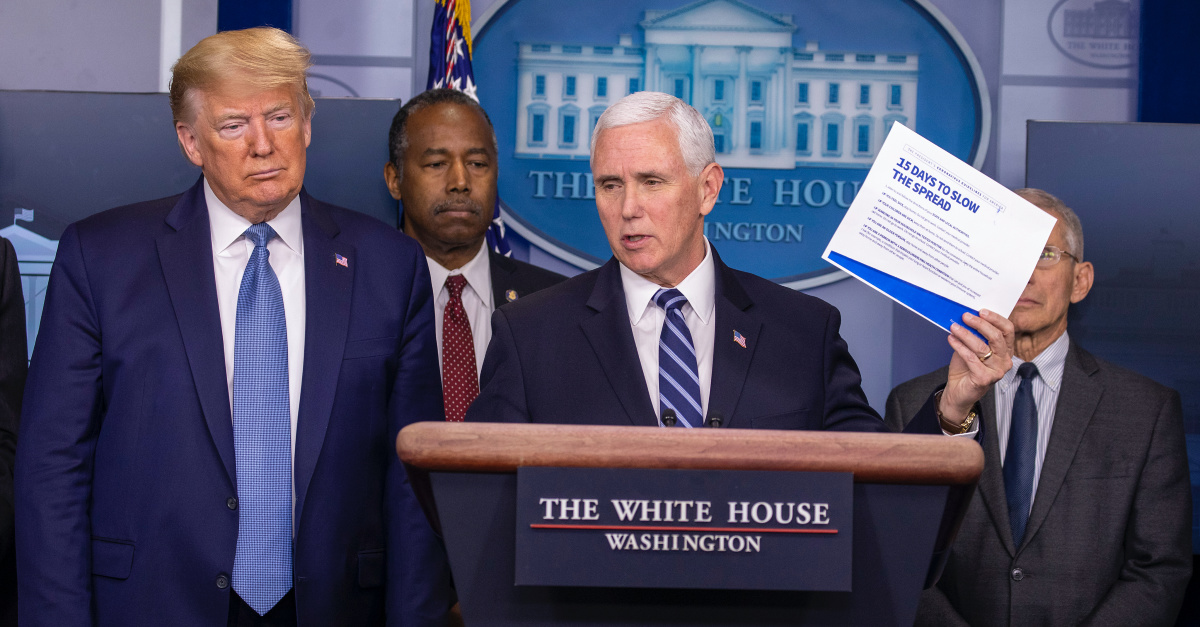 President Trump and Vice President Mike Pence this weekend thanked church leaders for their cooperation during the COVID-19 outbreak, saying Americans are coming together to defeat the pandemic.

On Saturday, Trump said he and Pence had a “great conversation” over the phone the previous day with religious leaders.

“This has been a week of national action and of great national solidarity,” Trump said.

Pence noted that churches have suspended services to prevent the coronavirus from spreading.

“We want to thank all the religious leaders from every community of faith in the country making the hard choice to suspend services, to have online services, even while those ministries are continuing to support food banks and come alongside the most vulnerable,” Pence said. “And, of course, the chorus of prayers that is coming up from communities of faith around the country is making the difference that it always has in the life of this nation.”

It’s important for religious Americans, Pence said, to continue to donate to their place of worship when it’s not meeting.

“One thing the president and I promised was to remind people that on the weekends that you’re not in the pews, it’s still … a good idea to – if you can – to go ahead and make that donation. Because all the ministries are continuing to play a vital role in our communities and we encourage your continued support,” Pence said.

The fight against COVID-19 is “not a whole-of-government approach” but a “whole-of-America approach,” Pence said.

“People are responding,” Pence said. “… The American people are coming together. They’re responding with common sense, compassion and generosity. People are heeding the advice of state and local authorities, and tens of millions of Americans are putting into practice the ‘15 days to slow the spread.’”

The coronavirus is “three times more contagious than the flu,” Pence said.

Later in the press conference, Trump again mentioned faith when discussing chloroquine, a drug the FDA is testing in the fight against COVID-19.

“This would be a gift from God if it works,” he said. “So we’re going to pray to God that it does work. It’d be a fantastic thing.”