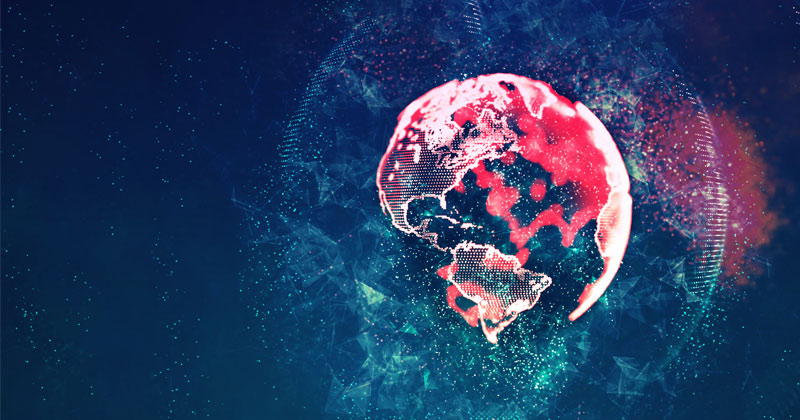 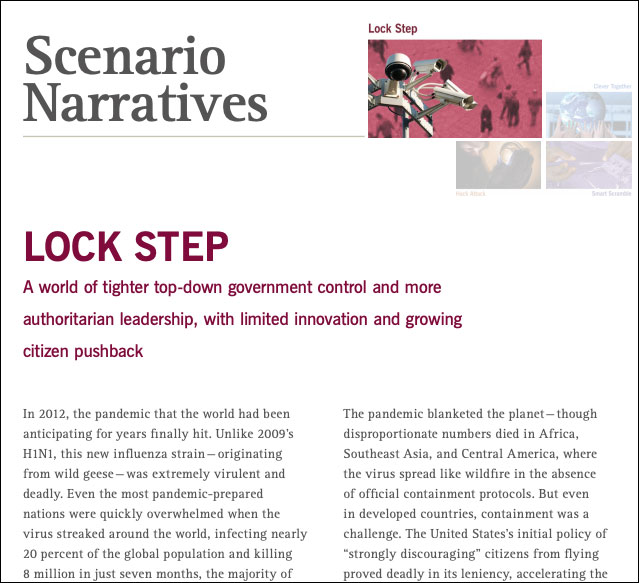 The 2010 report, entitled, “Scenarios for the Future of Technology and International Development,” outlines several possible future global scenarios, including a “Lock Step” vision in which a “new influenza strain… infects nearly 20 percent of the global population… killing 8 million in just seven months…”

“In 2012, the pandemic that the world had been anticipating for years finally hit,” the scenario begins. “Unlike 2009’s H1N1, this new influenza strain—originating from wild geese—was extremely virulent and deadly.”

“The pandemic also had a deadly effect on economies: international mobility of both people and goods screeched to a halt, debilitating industries like tourism and breaking global supply chains,” the scenario continues, describing almost the exact events of 2020 in the wake of the coronavirus outbreak. “Even locally, normally bustling shops and office buildings sat empty for months, devoid of both employees and customers.”

Mandatory quarantines were also a key feature in the fictional scenario dreamt up by the globalist think tank:

The Chinese government’s quick imposition and enforcement of mandatory quarantine for all citizens, as well as its instant and near-hermetic sealing off of all borders, saved millions of lives, stopping the spread of the virus far earlier than in other countries and enabling a swifter postpandemic recovery.

A “day in the life” anecdote, written from the viewpoint of an Indian citizen living in the year 2025, also credits quarantine orders for helping re-educate Hindus on the religious practice of placing the bodies and cremated remains of loved ones in the Ganges river.

Many lives in [Manisha’s] home city of Jaipur had been saved by the government’s quarantines during the pandemic, and that experience, thought Manisha, had given the government the confidence to be so strict about river usage now: how else could they get millions of Indian citizens to completely shift their cultural practices in relationship to a holy site? Discarding ritually burned bodies in the Ganges was now illegal, punishable by years of jail time.

The scenario also predicts future technologies such as MRI scanners which detect abnormal behavior and predict “antisocial intent,” diagnostic screenings for people released from hospitals and prisons, and government clampdowns on the internet “Driven by protectionism and national security concerns.”

“Governments have varying degrees of success in policing internet traffic, but these efforts nevertheless fracture the ‘World Wide’ Web,” the scenario envisions.

The report, produced by the Rockefeller Foundation in collaboration with the Global Business Network, also gives a snapshot of the roles philanthropic organizations would play in each of four potential futures.

“But no matter what world might emerge, there are real choices to be made about what areas and goals to address and how to drive success toward particular objectives,” the report reads.

While the report notes the four “scenarios are not predictions,” parallels with the current coronavirus dystopian nightmare playing out are hard to dismiss.

Read through the document: