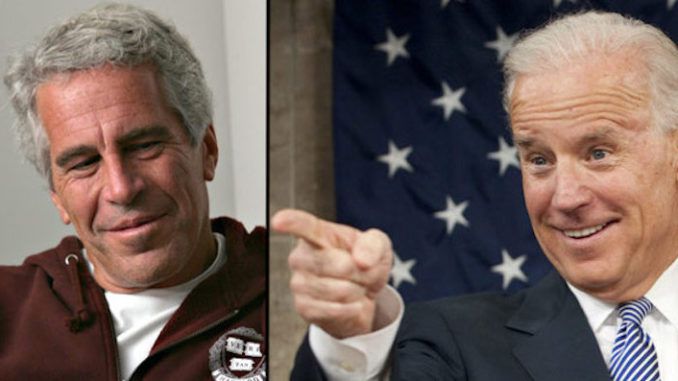 A Silicon Valley billionaire who worked to “repair” the image of notorious pedophile Jeffrey Epstein after he was jailed for child sex crimes has now decided to help Joe Biden.

Reid Hoffman, who has also admitted he has financial ties with Epstein, is now dropping serious cash into the super PAC supporting Joe Biden’s candidacy.

The Unite the Country PAC, which launched in late October while Biden was posting low fundraising totals, hauled in $4.2 million in February, its newest records show.

Its largest donation was $1 million from LinkedIn founder Reid Hoffman, who previously apologized for “helping to repair” Epstein’s reputation and for funding a pro-Democrat disinformation campaign in Alabama.

Washington Free Beacon report: The pro-Biden PAC has provided an outside cash boost to Biden’s bid for the nomination.

Biden initially chastised the PAC’s formation, leading the group to shut down. Biden’s communications director said at the time the candidate “does not welcome assistance from super PACs.”

Unite the Country has since poured millions into Iowa and Super Tuesday states. It is currently running advertisements repeating two debunked claims about President Donald Trump’s handling of the coronavirus pandemic.

Hoffman—the PAC’s largest donor with $1.5 million in contributions—acknowledged he had several interactions with Epstein. The billionaire tech mogul said he put Epstein in contact with others for fundraising purposes after the child molester had been charged with sex crimes.

In August 2015, Hoffman invited Epstein and Joi Ito, the former director of MIT’s Media Lab, to dinner in California.

“Prior to these interactions, I was told by Joi that Epstein had cleared the MIT vetting process, which was the basis for my participation,” Hoffman said in an apology letter published by Axios last September.

“My last interaction with Epstein was in 2015. Still, by agreeing to participate in any fundraising activity where Epstein was present, I helped to repair his reputation and perpetuate injustice.”

Nearly a month after Epstein was found dead in his prison cell while facing federal sex-trafficking charges, Ito said he took $1.2 million from the disgraced financier for his own investment funds and another $525,000 for the Media Lab. He resigned as director.

Hoffman also came under fire for his hand in bankrolling what he admitted was a “highly disturbing” pro-Democrat disinformation campaign three years ago in Alabama, for which he later apologized. Hoffman gave $750,000 to American Engagement Technologies, which undertook online campaigns to mislead Republicans in the state.

The tech billionaire was also an early supporter of ACRONYM, the dark money group in charge of the botched Iowa caucus app. Tara McGowan, executive director of ACRONYM, said Hoffman and other billionaires “took a chance” on the group prior to its February meltdown.

Hoffman has provided a maximum $865,000 contribution to the Democratic Grassroots Victory Fund, a joint venture between the Democratic National Committee, 50 state Democratic parties, and the District of Columbia Democratic State Committee. He also gave $250,000 to Stacey Abrams’s Fair Fight PAC and $250,000 to the House Majority PAC, among other committees.

Unite the Country did not respond to requests for comment.

The pro-Biden PAC was launched by D.C. fundraisers Mark Riddle and Matt Tompkins. Tompkins submitted paperwork to the Federal Election Commission on April 24 to form a committee called the Biden PAC. The two also established Future Majority, a dark money entity that planned to spend $60 million in the 2020 elections. The PAC’s name later changed to “For the People PAC,” identical to Future Majority’s “For the People” plan that was posted on its website at the time.

Riddle called the connection “an interesting coincidence” when questioned on it by RealClearPolitics. He did not respond to inquiries last April from the Free Beacon on Tompkins’s involvement with both the Biden PAC and the dark money group.

Future Majority has been active in the Midwest alongside other Democratic groups who are pouring tens of millions of dollars into the region in attempts to defeat President Trump in November.