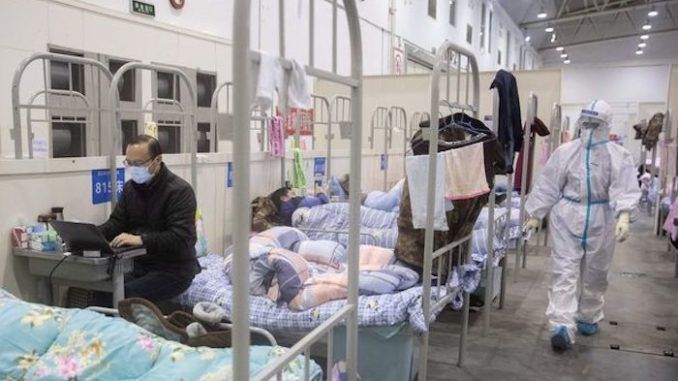 The novel coronavirus killed more than 42,000 people in the city of Wuhan alone, according to locals at the epicenter of the pandemic — a figure which is more than 10 times the official number of dead claimed by the ruling Chinese Communist Party government.

According to the Chinese government, the coronavirus has claimed the lives of 3,300 people and infected more than 81,000.

Of those deaths, 3,182 were reported in Wuhan and the Hubei Province, the epicenter of the pandemic.

But Chinese residents in Wuhan claim the real numbers are much higher.

According to the citizens, 500 urns have been handed out to grieving families every day from seven separate funeral homes all serving the city.

This means the ashes of 3,500 people are distributed every 24 hours.

DailyMail report: The homes – in Hankou, Wuchang and Hanyang – have told grieving families that they will receive the ashes before April 5, the date of Qing Ming festival where people tend the graves of their ancestors.

This means that 42,000 urns could be distributed in that 12-day period.

Earlier reports stated that the Hankou premises received two shipments of 5,000 urns in just two days, according to local media.

It comes as the province relaxed its two-month lockdown of 50million people.

People who have a ‘green’ health certificate – meaning they have tested negative for the virus – were allowed to leave the province from midnight on March 25, the first time they have been allowed out of the region since January 23.

However, restrictions on travelling into and out of the mega-city of Wuhan – where the virus first emerged – will remain in place until April 8.

A resident in Wuhan – who only provided his surname Zhang – told RFA: ‘It can’t be right because the incinerators have been working round the clock, so how can so few people have died?’

Another resident – with the surname Mao  – said: ‘Maybe the authorities are gradually releasing the real figures, intentionally or unintentionally, so that people will gradually come to accept the reality.’

A source close to authorities in Hubei province said many residents had died in their homes without being officially diagnosed.

They claimed the estimated figure was not exaggerated as in one month, 28,000 cremations took place.

It comes as Italy and the US have overtaken China as the hotbeds of the virus – which has killed more than 30,000 and infected 664,695 world wide.