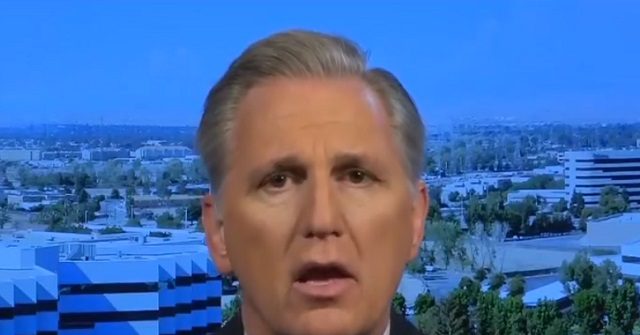 So, does that mean we’re getting another stimulus, a fourth package after the next 10 to 12 weeks?

MCCARTHY: I’m not sure we need a fourth package.

And before we go to start drafting a forth package, I’d like these three packages we just put out — remember, it’s more than $2 trillion, the largest we have ever seen — to take care and get this economy moving.

Remember, for unemployment insurance, we’re adding another $600 above what your state pays.

MCCARTHY: We start paying in the first week, and we give you additional 13 weeks.

What concerns me is, when I listen to Nancy Pelosi talk about a fourth package now, it’s because she didn’t get in the things that she really wanted to change the election law, a Green New Deal, expand — make us pay for Planned Parenthood, and expand what you’re seeing for sanctuary cities.

BARTIROMO: That is so outrageous that you were actually being asked to consider funding Planned Parenthood, at a time that we are in this crisis situation, where you’re trying to come up with a relief package.

I just want to share with you what Nancy Pelosi said this morning, though, Congressman because she is just saying this right now: “President Trump denial at the beginning of this was deadly,” and that, right now, “As he fiddles” — her words — “as he fiddles, people are dying.”

This is what Nancy Pelosi said this morning. Your reaction?

MCCARTHY: Well, what I see is that Nancy is trying to cover herself and the Democratic Party, because the amount of damage that they had just done in the last week, requesting about changing election law, that her number three in her own party said they wanted to restructure government, take the opportunity of a crisis.

And, Maria, what happened last week, 3.2 million Americans lost their job, six times higher than in the financial crisis, higher than the Great Depression, all because Democrats wanted to put their liberal parts in.

But this president fought for it. This president stopped that. And what’s most importantly is, history will not be kind to the Democrats. Holding up that week was so critical. When you look at the action that President Trump took, one of the first to stop that the Chinese would be coming into America, or Europe as well.

And their own party criticized the president for doing those actions, but it saved thousands of lives, just as he wanted to move this bill. I was sitting in that meeting last Sunday. This bill is 99 percent where it was last Sunday.

But Nancy Pelosi held it up, bragged to her members in the idea of changing Green New Deal, Planned Parenthood, changing election law, and expanding sanctuary cities, nothing to do with coronavirus.

They did get 24 million more dollars for the Kennedy Center.

BARTIROMO: Well, it’s incredible, because she tells — she — yes, exactly, $25 million for the Kennedy Center.

And yet she tells a completely different story. You know this. You know that said she did jujitsu on the plan. She said, we had to do jujitsu to change it to get it where it is.