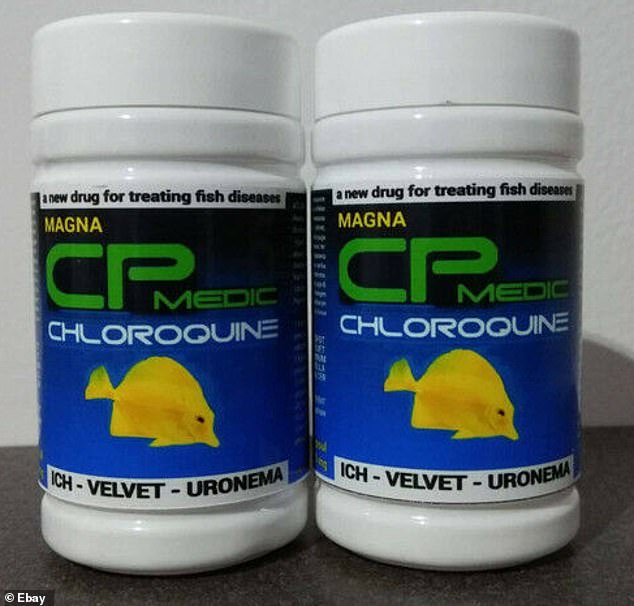 Shortly after President Trump touted chloroquine as a potential cure for COVID-19, the media triumphantly reported that a man died from taking homemade chloroquine due to Trump’s recommendation. It turned out that the man’s wife fed him some fish tank cleaner. She even partook of it with him, except that he died while she didn’t. As a dedicated murder mystery reader, I didn’t blame Trump. My suspicions were focused elsewhere. It turns out my instincts may have been right on the money. Here’s the story the drive-by media didn’t tell you:

On March 20, President Trump expressed his hope that chloroquine (also prescribed as hydroxychloroquine) might be an effective way to treat COVID-19, especially when used in conjunction with Azithromycin, an antibiotic. The next day, he reiterated that hope in a tweet.

Two days later, Axios reported, “Man dies after self-medicating with chloroquine phosphate.” Axios articles have bullet points to guide readers. In the case of what was a brief, and seemingly bizarre, news squiblet, the bullet points said “Why it matters,” “Worth noting,” and “Go deeper.” That last bullet point led readers to an article entitled “Trump touts drugs not yet approved by FDA for treating coronavirus.” The reader could almost hear the Axios editors adding, “hint,  hint.”

Sure enough, by March 24, the narrative was in place. President Trump was responsible for killing a man and almost killing a woman. Indeed, these narratives were not subtle. This NPR tweet is a stand-in for what all the media outlets were doing:

An Arizona man is died of a heart attack and his wife was hospitalized after the couple ingested a type of chloroquine, a chemical that has been hailed recently by President Trump as a possible “game changer” in the fight against novel coronavirus. https://t.co/ItBLKqac8B

Even as that lie was racing around the world, the truth was struggling to get out. In this case, the truth was that the couple hadn’t take chloroquine at all. Instead, they’d ingested a fish tank cleaner that had “chloroquine phosphate,” a deadly chemical.

Even though a fish tank cleaner has nothing to do with a long-recognized and legal anti-malarial drug, the media and the woman herself pushed the anti-Trump narrative. Indeed, the woman explicitly condemned Trump: “Don’t believe anything that the President says and his people.”

On March 28, I wrote a post for publication on March 29, about the fact that Trump was probably right about chloroquine’s efficacy, and that the media was almost certainly wrong when they rushed out to condemn it solely because he praised it. By the time I wrote that post, I’d been saying to friends for a couple of days that I didn’t believe anyone could be stupid enough to think that eating fish tank cleaner with chloroquine phosphate was the same as getting a prescription for chloroquine from a doctor.

Instead, I told my friends, look to Agatha Christie or Dorothy Sayers for answers. Both those women had written mysteries in which the killer also ingested small amounts of the poison to deflect attention.

When I wrote the post, I included the same point I’d made to my friends, although I did it parenthetically. On the evidence available, I had a niggling gut feeling that stupidity didn’t explain events: “In an Agatha Christie mystery, the truth would have been that the woman cleverly figured out how to kill her husband.”

By March 30, thanks to some excellent reporting from the Washington Free Beacon, there was more information about the woman who survived. Most people noted the fact that she was a fanatic anti-Trumper and “pro-science” person. In the post I wrote for publication on March 31, I obsessed about something different, which was the fact that the story didn’t ring true:

Either this couple was staggeringly stupid (which is, admittedly, a possibility) or, as he said, something doesn’t compute.  The whole thing reads like something out of a mystery novel, with the narrative being too pat: Trump is hopeful about a drug, a Trump-hating woman “spontaneously” decides that Trump explicitly recommended eating fish tank cleaner, her husband dies, and the media have a ready-made headline.  No matter how you spin it, it’s a fishy story, at best.

Had I been keeping up with Techno Fog on Twitter, I wouldn’t have been so delicate in my hints. It turns out that “Court records show the wife who fed her husband fish cleaner (poison?) has a history of mental illness (paranoia, depression) and had considered divorcing her husband as far back as 2012″:

Court records show the wife who fed her husband fish cleaner (poison?) has a history of mental illness (paranoia, depression) and had considered divorcing her husband as far back as 2012.

The wife had significant health issues.

She testified that she had “adrenal gland failure, and steroids and heart medicine are keeping me functioning”

While this shows that she (and maybe her husband) were high risk for COVID-19.. pic.twitter.com/cOCPexKckp

Her familiarity with medication doesn’t exactly fit the profile of someone who would mix fish cleaner with soda.

(If you know the regimented type you understand.)

And she certainly wasn’t shy to seek input from doctors.

Transcripts (civil case) show she sought out an occupational health doctor and “wanted his advice” pic.twitter.com/2159KX0WHT

As to the mental health struggles:

“I am on three sleeping pills at night so that I don’t have nightmares and so that I can sleep.”

The sleeping pills – melatonin, Ambien, Valium (all at once 😳) pic.twitter.com/FKZ3SuGzei

After her car got towed at work:

“I literally had a breakdown in front of the whole cafeteria…”

“I went nuts… I had a total breakdown.” pic.twitter.com/L4H90pLgNw

Did you tell your doctor in 2012 that you wanted a divorce?

Finally – “We’re broke because of my medical situation” pic.twitter.com/sDyZd5yQNL

These raise SIGNIFICANT questions when a spouse kills the other (taking this stuff was her idea).

A curious media would get the 911 call and see if there was an autopsy.

Listen to the audio interview.

What do you hear?

Here’s an excellent rule of thumb when navigating stories that are hostile to President Trump: Assume everything you hear is a lie, whether it’s from the media or from the anti-Trump source about which the media is reporting. Also, you can learn a lot about human nature and sneaky crimes by reading murder mysteries.

Incidentally, I’m with Techno Fog in that I’m not saying the woman committed a crime. I’m only saying that the police should look closely at her actions. It’s equally possible that her husband was simply a victim of a woman who is malignantly stupid.