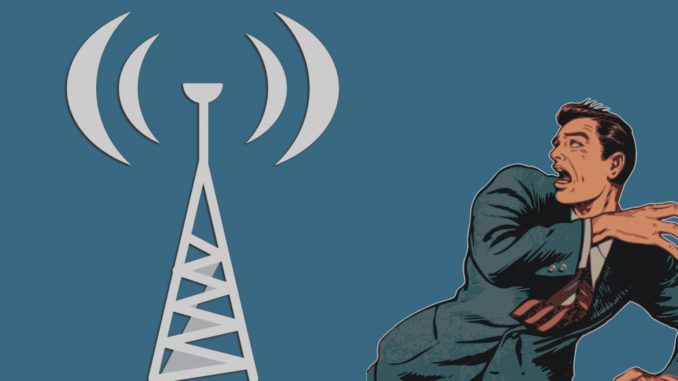 The warning came after a Sussex radio station was given a severe warning for broadcasting ‘baseless conspiracy theories’ connecting the pandemic to the rollout of 5G.

Ofcom, the government-approved media watchdog, ordered the station to broadcast an apology (in a manner of the regualtors choosing) and warned other media outlets that it would be stepping up its monitoring.

The Guardian reports: Members of the public complained after hearing a broadcast on the community radio station Uckfield FM, in which a woman introduced as a “registered nurse” claimed, without any evidence, that the rollout of 5G phone technology in Wuhan was connected to the outbreak and that the virus had been created in a lab.

It later emerged that she was a practitioner of alternative medicines, while the media regulator said it was “not aware of any reputable scientific evidence to corroborate such a contentious claim which runs contrary to all official advice, both in the UK and internationally, about coronavirus.”

Ofcom confirmed it was actively monitoring television and radio stations that might be broadcasting potentially harmful views about the causes and origins of Covid-19 that have “the potential to undermine people’s trust in the advice of mainstream sources of information” during the crisis.

Baseless suggestions that coronavirus is linked to 5G have spread widely in recent weeks on WhatsApp, Facebook groups, and on the fast-growing community website NextDoor – all of which have the ability to reach vastly more people than a small community radio station in Sussex but are much less regulated.

The spread of baseless material on WhatsApp connecting 5G to coronavirus has now been covered in many mainstream news outlets, boosted by social media posts by celebrities such as the actor Woody Harrelson.

This poses a conundrum for those seeking to convince the public that the fears are unfounded. Fact-checking organisations often find that people are reluctant to change their mind once convinced of an issue if they are simply told they are wrong, despite international agencies finding there are no health risks associated with 5G and no link to coronavirus. There is also the risk that declining trust in mainstream media means that attempts to stop the claims spreading are seen as a cover-up.

In the case of Uckfield FM, Ofcom reported that the guest also used her appearance to launch a lengthy attack on health professionals in the NHS dealing with the pandemic.

She said: “Just because you have this qualification, do not wear that like a crown of glory … The days are gone when you were a doctor and a nurse and everybody trusted you. Those days are well gone. Do your own research. Do not trust a qualification. I know many people who are very qualified who know very little. Because remember the people that own the establishments that teach us, it all travels back to the same thing. It’s all owned by big pharma. They own the medical elite and they determine what gets published.”