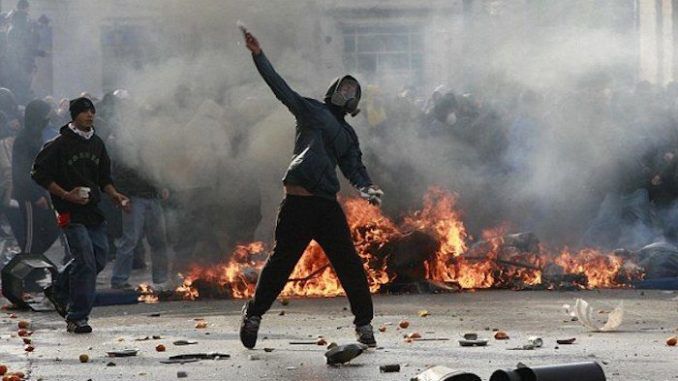 Widespread civil unrest in the United States as a result of the coronavirus pandemic is imminent, according to crime, economic, and behavioral experts.

“What will likely prompt looting, rioting, civil unrest will be if public services are overloaded,” Andrew Bringuel II, a former supervisory special agent at the FBI’s Behavioral Analysis unit and executive director of the Behavioral Science Unit, wrote in an email.

“If people lose their public trust in the confidence that the police can maintain social order, they will begin to defend themselves against those who don’t recognize the rule of law. Thomas Hobbs described this as a breakdown of the social contract, and it’s really an imbalance in social equilibrium.”

Washingtonexaminer.com reports: If people who were laid off in March go without paychecks for another month or two, they may be unable to support themselves, explained the World Bank’s former lead research economist, Branko Milanovic. People without money still need food and medical supplies.

“The suffering is going to be so severe,” said Joseph Margulies, a Cornell University law professor and author of What Changed When Everything Changed: 9/11 and the Making of National Identity.

“It’s a broad-base concern in terms of people being out of work, maybe neighborhood stores closing, people being concerned about assistance and unemployment benefits running out,” said Bill Johnson, executive director for the National Association of Police Organizations. “Not so much because of the virus but because of the downturn in the economy, people being out of work, and that sort of thing, typically you’re going to see an uptick first in property crime and, hopefully, it won’t happen, but you’ll have an increase in other types of crime as well.”

Bringuel said crime rates in general have declined recently as the majority of the country’s population is under stay-at-home orders, but property crime has not gone down. He proposed medical supplies may be more immediately desired than food because there is no food shortage as of April 1, but even basic medical supplies such as masks are unavailable to the extent needed nationwide.

“The areas fraying will likely be hospitals where staff are becoming stressed with [personal protective equipment] in short supply,” said Bringuel. “While these brave men and women are on the job, there could come a time that they revert to their sense of self-interest and need for self-preservation and refuse to provide medical services.”

Unlike the violence in New Orleans soon after Hurricane Katrina in 2005, this pandemic is a slowly unfolding disaster, which comes with pros and cons in how law enforcement can respond to an uptick in crime or civil unrest.

“If there’s not enough police healthy to respond, then what happens, I think, that other departments, sheriffs, agencies, state police, National Guard, private security, will pick up that slack,” said Johnson, adding that National Guard activations in each state could be made so that the military is enforcing curfew and keeping the public safe while police respond to emergencies. “One silver lining is that it seems so far that the sickness, illnesses, the deaths are not everywhere at once at the same level. It’s piquing in New York, New Jersey. It may be emerging in Florida, New Orleans.”

In New York City on Tuesday, 5,600 officers were not working because they were sick, which is almost 15% of the force. But absences in large forces is different than a small sheriff’s department that may have a total of 12 employees and have four out sick. Bigger departments will rely on pacts with others to supplement absences, Johnson said.

“If it happens in one place, you can actually deal with it, but it will become more serious if it happens simultaneously in a number of places,” said Milanovic, who is currently a senior scholar at the City University of New York’s Stone Center on Socio-Economic Inequality.

The extent of riots and crime will be greatly affected by the federal government’s response over the next few months, the experts agreed. Margulies predicted “tens of millions of people will be affected — their economic livelihood destroyed if the government doesn’t come to their assistance.” As of late March, nearly half of all U.S. companies are expected to furlough workers,and more than one-third are not hiring in the near future.

“The president’s advisers know that, in times of crisis, social equilibrium is critical, and in order to increase public trust, the government has to be seen as making positive decisions,” said Bringuel, who approved of the daily White House press conferences, economic stimulus package, and the government’s centralizing its crisis response.

“I think they are willing to take steps to alleviate suffering. If they do, then I think that we will weather this with a lot less harm than it could have been,” said Margulies.