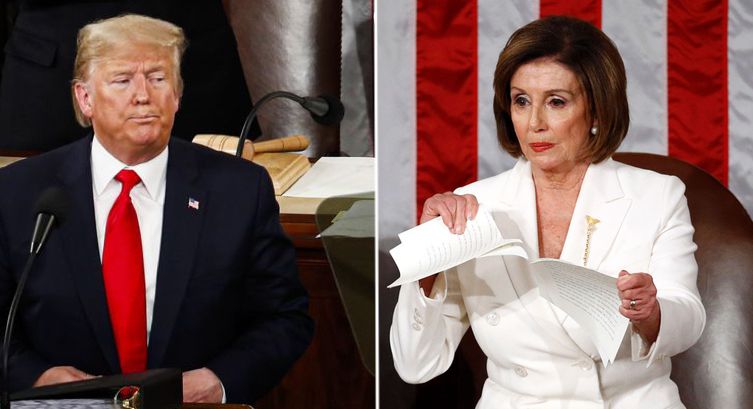 Democrats and their mainstream media allies are attempting to convince America that the Trump administration was unprepared for the coronavirus outbreak. But it looks like Pelosi and the Democrats were the ones who were blindsided by the COVID-19 pandemic.

“Protecting Americans’ health also means fighting infectious diseases,” Trump said in the Feb. 4 State of the Union speech, while Nancy Pelosi was preparing to tear up her copy. “We are coordinating with the Chinese government and working closely together on the coronavirus outbreak in China. My administration will take all necessary steps to safeguard our citizens from this threat.”

Watch Trump’s prescient remarks on the coronavirus below, complete with grim-faced Nancy Pelosi shuffling papers behind him:

WesternJournal report: Instead of listening, it appears Pelosi was more intent on preparing for her big stunt— tearing up a copy of Trump’s speech after the president’s closing remarks.

Even before Trump’s infamous speech, he was acting to fight against coronavirus.

In January, the president banned travel to the U.S. of foreign nationals from China and instituted a quarantine on American soil of incoming U.S. citizens who had traveled to areas of China where they may have been exposed to the virus, a step seen as extraordinary by some at the time.

While the House speaker is now claiming Trump was unprepared, it looks like Pelosi was the one who was blindsided by the COVID-19 pandemic.

The first mention of “coronavirus” on Pelosi’s Twitter account was on Feb. 24, nearly three weeks after the president’s speech and almost a month after he stopped travel from China.

When Pelosi finally did catch on that there was an impending pandemic barreling toward America, it looks like her response only made things worse.

Instead of urging citizens to prepare by securing life-saving prescriptions and other essentials, she encouraged people to fill city streets. The House speaker made a point to tour San Francisco’s Chinatown while assuring people there was nothing to worry about.

If it’s not abundantly clear by now, the last thing you want to do during the current pandemic is crowd city streets and mill around an area known for being a tourist destination.

Thankfully, Pelosi is not in charge of the coronavirus response — but she’s not letting that stop her from trying to become the head honcho.

The House speaker announced Thursday that she is creating a committee to oversee coronavirus relief funds, and yes, her creation will have subpoena power.

It seems the Democratic Party should now change their motto to something more appropriate, maybe something along the lines of “never let a good crisis go to waste.”