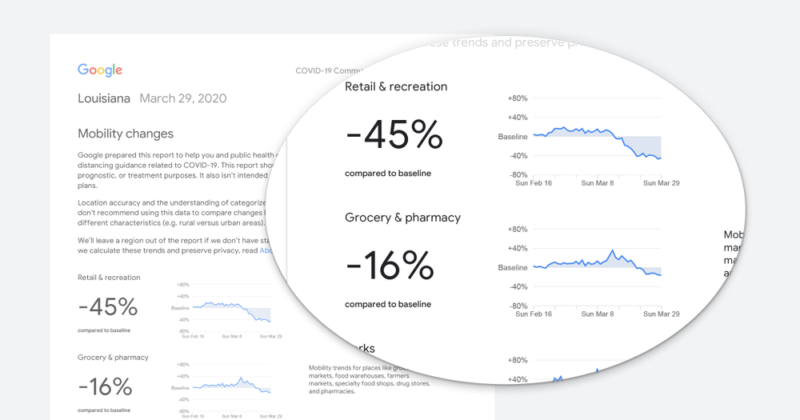 The entire world is scrambling to mitigate the novel coronavirus pandemic. By now, a majority of US states are under some kind of stay-at-home order, with governors nationwide asking or requiring non-essential businesses to close and everyone to plant their butts at home as much as possible.

As the disease continues to march its way across the country and the globe, though—as of this writing, there have been more than 250,000 US diagnosed cases—officials, regulators, and we the work-from-home masses are all wondering: are we all actually complying with these new rules, or is it still chaos on the streets out there somewhere?

Google has unfathomable reams of data from billions of individuals worldwide, and it has pulled some of that location information together into community mobility reports to try to answer that question. Here’s the good news: by and large, trips to virtually everywhere that isn’t “home” have dropped a whole lot.

To make the reports, Google used location data from any account that has opted into allowing Google to store location history. The company’s services have billions of active daily users, so even if only a minority of users allowed location use, it would still create an enormous data set. Google broke down locations into six broad categories: Retail and recreation, such as malls, restaurants, and museums; grocery and pharmacy, which includes farmer’s markets and food warehouses along with supermarkets and drugstores; parks, including local, national, and state parks; transit stations; workplaces; and residential.

The reports, which so far go through March 29 (last Sunday), are broken down by country. For the United States, Google has also provided state-level reports which show data at the county level. While there’s a fair amount of variation, the trend across the board shows a huge drop in non-essential travel and significantly reduced travel in the grocery and pharmacy category as well. The “residential” category is also up across the board, showing that people are staying home.

The regional reports are more robust for urban centers than rural ones, simply because more densely populated areas have more data for Google to draw from. For example, Kings County, New York—better known as the borough of Brooklyn—has a population of about 2.5 million packed into its borders. That’s a large enough data set for Google, which found that Brooklyn residents are indeed making significantly fewer trips through transit stations and to retailers. Travel to workplaces is also down, likely due to a combination of people working from home where possible and being laid off or furloughed where not.

The only real wildcard is the “parks” category, which has no consistent pattern across states and counties. Park visits are up by 27 percent in Mississippi, for example, and up by 19 percent in neighboring Alabama, to the east—but down by 18 percent in Louisiana to the west, and almost flat, with only a 2 percent decline, in nearby Georgia.

Outdoor time of course might be a location-specific phenomenon, as lousy weather is going to keep people indoors and nice weather will bring them outside—which is becoming its own problem. Time outdoors every day is strongly encouraged for your exercise and mental health during this time, and people are all going for more walks, jogs, and bike rides. But people, home from work and school, have been flocking all at once to many parks, trails, and beaches, which creates crowds and defeats the purpose of social distancing. Many jurisdictions are consequently closing parks, which will no doubt affect the data going forward.

Even in all the noise, there are some hopeful signs in the data that people are listening. For all the wholly justified concern about spring break travelers and slow-to-act leadership in places like Florida, for example, travel to parks is down by 77 percent from the norm in Florida’s Miami-Dade county.

“These are unprecedented times and we will continue to evaluate these reports as we get feedback from public health officials, civil society groups, local governments and the community at large,” Google executives wrote in a blog post. “We hope these insights will add to other public health information that will help people and communities stay healthy and safe.”