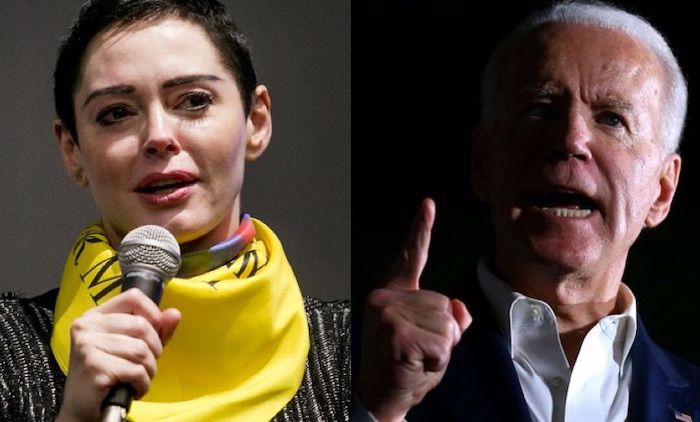 The mainstream media is a “complicity machine” that is in bed with the Democrat Party establishment and “is hard at work covering up for Creepy Joe Biden,” according to former Hollywood star Rose McGowan, who says “the media in the USA is making me ill.”

McGowan responded to a tweet from the Pulitzer Prize winner Glenn Greenwald, who declared it “shocking – truly – that not a single cable news host who has interviewed Biden has even dared ask him about these sexual assault allegations.”

Greenwald described the media’s sinister cover up as “disappearing Tara Reade.” Tara Reade is the former Biden Senate staffer who has credibly accused the former VP of sexually assaulting her in 1993.

I don’t have Covid-19, but the media in USA is making me ill. The complicity machine is hard at work covering up for Creepy @joebiden. Has @nbcnews asked any hard questions? Everyone knows he’ll lose, why not go hard? Why not TELL THE TRUTH https://t.co/N1ToDtBbDn

It's shocking – truly – that not a single cable news host who has interviewed Biden has even dared ask him about these sexual assault allegations – disappearing Tara Reade – which is why I'm always grateful for the integrity and independence of @democracynow: https://t.co/9lCdKmvm6I

Breitbart report: McGowan has continued to use her influential Twitter account to make a crusade of the media’s ongoing cover up of Reade’s credible accusations. On Sunday night she blasted the far-left New York Times specifically. In response to a Times story about why the public no longer trust the media, McGowan said, “it’s because the public sees your favoritism and your utter hypocrisy. Yes, you go after the reprehensible Trump, but leave Biden accusations alone.”

“You are the problem,” she added.

McGowan is also pointing to actress Alyssa Milano’s hypocrisy. Milano, who also identifies as a #MeToo activist, supports Biden and has yet to show any support for his credible accuser.

To expose Milano’s hypocrisy, McGowan is retweeting others exposing Milano, including one tweet that says, “Milano remains silent on the rape accusation against Joe Biden, after demanding we #BelieveWomen when Blasey Ford came forward against Kavanaugh,” the tweet accurately points out, adding, “and despite Tara Reade having more evidence against Biden and Biden having more female accusers than Kavanaugh ever did.”

The fact that Reade’s accusation is more credible than the accusation made against then-Supreme Court nominee Brett Kavanaugh, is not in dispute. For starters, there’s no proof Blasey Ford even knew Kavanaugh. Secondly, Blasey Ford’s own “witnesses” not only said they didn’t witness anything, more than one said the event never happened.

Nevertheless, actress-activists like Milano and the establishment media ripped mercilessly into Kavanaugh while they now hang Reade out to dry.

Reade, who first came forward in April of last year, did in fact work in Biden’s U.S. Senate office in 1993. She also has a woman who confirms Reade told her about what allegedly happened at the time.