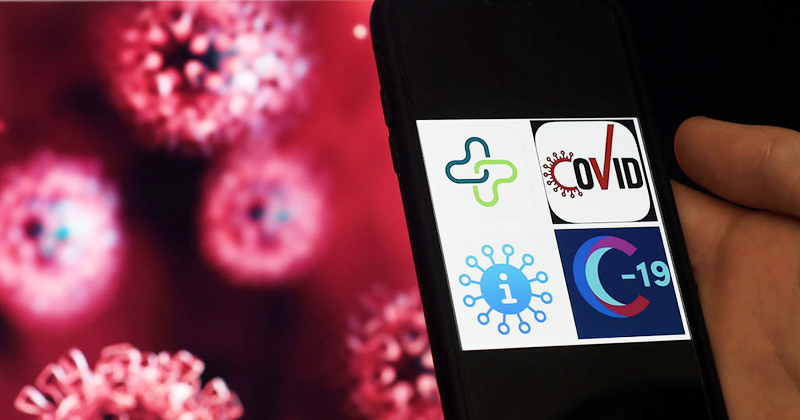 Update (2115ET): Shortly after completing this post, Apple and Google unveiled a rare partnership to add technology to their smartphone platforms that will alert users if they have come into contact with a person with Covid-19.

People must opt in to the system, but it has the potential to monitor about a third of the world’s population.

In this spirit of collaboration, Google and Apple are announcing a joint effort to enable the use of Bluetooth technology to help governments and health agencies reduce the spread of the virus, with user privacy and security central to the design.

In the coming months, the two tech giants will add the technology directly into their operating systems so this contact-tracing software works without having to download an app. Apple’s iOS and Google’s Android have about 3 billion users between them.

“All of us at Apple and Google believe there has never been a more important moment to work together to solve one of the world’s most pressing problems.”

Notably, while the technology will allow governments and health agencies to track contacts, it won’t notify users who they came into contact with, or where that happened.

And do not forget, this (opted-in) invasion of your privacy by the duopolist controllers of practically every wireless device in the world is for your own good…

“…we hope to harness the power of technology to help countries around the world slow the spread of COVID‑19 and accelerate the return of everyday life.“

Dr. Nick Begich guest hosts The Alex Jones Show to break down the digital gulag and how humanity must disconnect to progress.

Authored by Alan Macleod via MintPressNews.com,

In the fight against COVID–19 (coronavirus), Google has announced it is partnering with dozens of governments around the world, sharing its users’ location history, and, in the process, giving us an insight into how much the Silicon Valley company knows about us.

“As global communities respond to COVID-19, we’ve heard from public health officials that the same type of aggregated, anonymized insights we use in products such as Google Maps could be helpful as they make critical decisions to combat COVID-19,” it wrote, presenting its mountain of intrusive data collection as a positive.

“We hope these reports will help support decisions about how to manage the COVID-19 pandemic,” it added, suggesting that location data from its users’ devices could “help officials understand changes in essential trips,” inform businesses and help local governments plan and provide more efficient transport services, thus limiting the deadly virus’ spread.

The data it has released, even to the public, is certainly interesting (and quite worrying). For example, location data gleaned from smartphones shows that there are now 85 percent fewer trips to grocery or pharmacy stores in Italy, compared to early February, before the coronavirus struck the country. Italy went on extensive lockdown, and Google’s data shows it. Retail and recreation visits are down 94 percent, trips to parks are down 90 percent, transit stations 87 percent. The country’s infection curve appears to finally be flattening. In contrast, American retail and recreation visits are only down 47 percent, grocery and pharmacy visits 22 percent, parks 19 percent and transit stations 51 percent, suggesting American people are not staying at home nearly enough to dampen the flames of the virus.

Google insists that its new policy will not breach users’ privacy, promising to “adhere to our stringent privacy protocols and protecting people’s privacy. No personally identifiable information,” it claims “will be made available at any point.” This has not reassured everybody. MintPress News spoke to one advertising executive who rolled his eyes at the announcement.

“Your name is only one data point,” they said, noting that “The layers and layers of information you’re giving it,” like where you live, what your interests are, and which person’s social media accounts you keep frequenting (your own), make it beyond easy to identify whose data you are looking at. “It’s you whether you like it or not, even if you’re name’s not attached to it,” they said.

Non-profit civil liberties group the Electronic Frontier Foundation expressed some concern over the news, too. Although they recognized that the data Google holds could help the fight against COVID-19, they cautioned that consent should be required before data is used and the process must be transparent. “Experts will often be working within private companies with proprietary access to the data. Even if they make all the right choices, the public needs to be able to review these choices because the companies are sharing the public’s data,” they said, calling on Google to release its full methodology.

Whistleblower and privacy advocate Edward Snowden went further, claiming in an interview last month, “there’s not really any hard evidence that this does work.” “This is not GPS on your phone” they are using, he said, claiming that, as long as it was not in airplane mode, some data would be captured whether you consent or not. Technology site The Verge, however, wrote that the data is gleaned only from users who have already opted into storing their location history. Thus, if users disable their location history, this should prevent them from the majority of the tracking.

Technology allows for the monitoring of individuals to better regulate stay at home orders. However, this opens up new possibilities for authoritarian regimes. Israelis who violate quarantining are now subject to up to seven years in prison, and location data could be used against individuals. It would be something to be sent to jail because your phone ratted on you talking a walk. Furthermore, given the country’s history of racist law enforcement, the law has the potential for serious abuse.

Google’s move is merely the latest in a long line linking big tech companies ever more closely with the government and the security state. In their book titled, “The New Digital Age: Reshaping the Future of People, Nations and Business,” Eric Schmidt and fellow Google executive Jared Cohen wrote, “What Lockheed Martin was to the twentieth century…technology and cyber-security companies [like Google] will be to the twenty-first.”

In 2018 Facebook announced it was partnering with the Atlantic Council to help them weed out fake news on its platforms. An offshoot of NATO, the Council is run by dozens of senior former government officials, including Henry Kissinger, Colin Powell and Condoleezza Rice, and numerous former heads of the CIA, including Michael Hayden, Leon Panetta, and Michael Morell. Since working with the Council, Facebook has moved quickly to suppress information and views emanating from Washington’s enemies, including the governments of Russia and Venezuela. And when Trump assassinated Iranian General Qassem Soleimani, Facebook banned all messages of support for the slain statesman, despite the fact that he was popular with over 80 percent of his countryfolk. Facebook explained the decision, noting they were not a neutral service provider but an American company that operates under American laws, and when Trump declares anyone a terrorist, they will comply.

Although Google’s latest use for our data is arguably the only occurrence of it being used to help humanity rather than relentlessly advertising to it, it still has worrying ramifications. Snowden warned that new laws infringing on civil liberties tend to be “sticky,” i.e. very hard to get rid of. Funding both political parties and paid billions by the government and the security state for military contracts, it is increasingly difficult to see where big tech companies like Google end and the government begins.