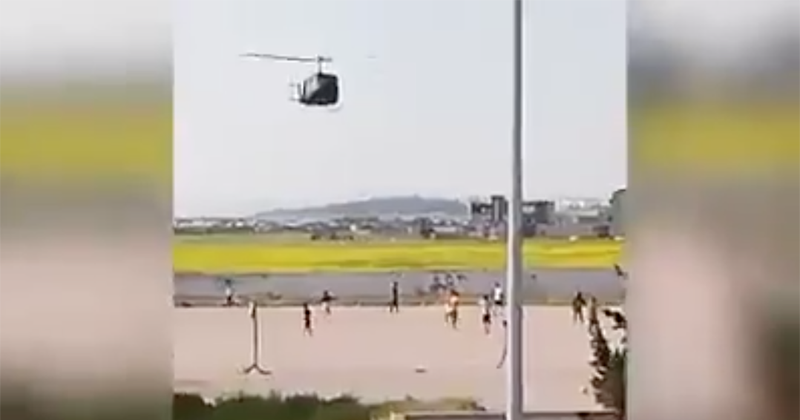 It appears the government of the tiny north African country of Tunisia thinks there is a competition on for the most absurd overreaction to citizens ignoring and defying national ‘stay at home’ orders.

In late March, Tunisia made headlines by deploying a “robocop” to help enforce the virus lockdown in the capital of Tunis. At that time the interior ministry confirmed it deployed a four-wheeled robot that harasses people if they’re violating the strict public health orders to shelter-at-home.

Though that earlier method which resulted in bizarre dystopic scenes of a robot interrogating random citizens evoked widespread mockery and anger on the internet, it seems authorities were unfazed, as days ago the Tunisian Army actually deployed a military helicopter against a group of young people playing a pick-up game of soccer.

Despite Tunisia currently only having 685 confirmed COVID-19 cases, including 28 deaths – perhaps due to early drastic strict lockdown measures – the country has maintained a state essentially close to martial law.

Tunisia’s President Kais Saied as early as March 23rd ordered the army into the streets to curb the spread of coronavirus, Reutersreported previously.

Esquire Middle East reported Sunday while featuring the new video: “However, despite the measures, some people have not been taking it seriously enough. According to a journalist based in Tunisia, a big crowd of people playing football together were in for a rude awakening.”

How to enforce social distancing with a helicopter: in Tunisia, authorities used a helicopter to unceremoniously end a football match that violated a countrywide lockdown.  pic.twitter.com/s4iz7Gd7pw

“Dramatic footage shows authorities using a military helicopter to shut down a football match taking place in violation of the rules,” the online magazine reported.

According to freelance journalist Samer al-Atrush, who reports from inside Tunisia, the army was literally using the chopper to enforce social distancing.