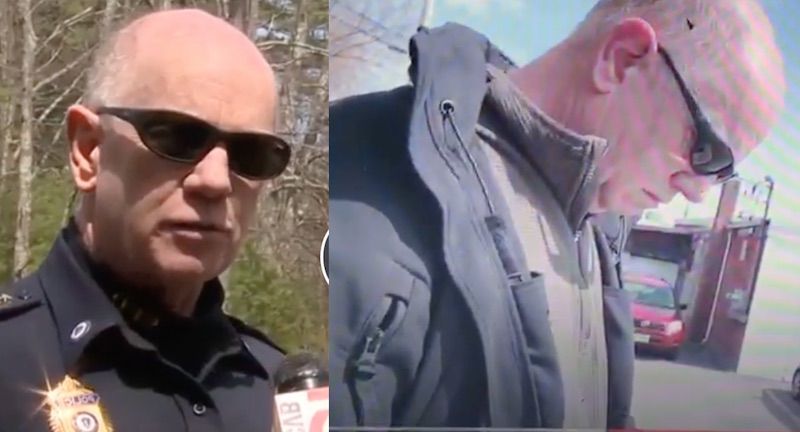 A police chief in Stow, Massachusetts has been relieved of his duties as the city’s top cop and is facing an investigation after a video by a self-declared “pedophile hunter” was posted online.

The video shows Stow Police Chief Ralph Marino allegedly attempting to meet a boy — who he knew was only 14 — for sex. Instead of meeting the boy, however, the chief was confronted by the pedophile hunters from Predator Poachers Massachusetts.

Below is the disturbing video of the police chief attempting to groom a child and lure him into meeting for sex. Had the boy been an actual real child, there is no telling what the chief might have done. Warning, the text messages in the video below are disturbing.

TFTP report: As NBC10 Boston reports, Marino met with Massachusetts State Police representatives Saturday at the Stow police department. After the meeting he put himself on indefinite administrative leave.

In a statement, the town said it would cooperate fully in “any investigation of Chief Marino or any other matters.

“There is no reason to believe that the activities being investigated involve or concern the operations of the Stow Police Department,” the statement said.

As the video shows, the ‘Catch a Predator’ style format of the group found the chief waiting outside of a local establishment. The chief had allegedly been exchanging text messages with the undercover vigilantes in the Predator Poachers group, who he thought was a 14-year-old boy.

The chief’s messages were gruesome in nature and illustrated his level of depravity. The chief knew that the person he was communicating with was a child.

Despite the fact that he knew the person on the other end of the text was a child, the chief described his sexual desires to him, asked the child about the size of his genitals, and arranged to meet the child in a place “out of the way.”

The video starts when the chief is waiting to meet the boy, ‘somewhere out of the way.’ In the video, the man confronts Marino and attempts to identify him as ‘Mark.”

Marino looks shocked and the man filming accuses the chief of trying to meet a 14-year-old boy for sex.

Predator Poachers knew that Marino was their man, as he had asked the chief to send a picture of himself to the 14-year-old boy, and the chief complied.

The chief appears to be frantically scrolling through his phone in an apparent attempt to delete the conversation with the pretend boy. However, as he reportedly attempts to delete the texts, the man filming tells him that he has them all in screen shots already.

The chief then walks away and gets into what appears to be a police-issued vehicle before driving off in shame. The entire time, the man filming is calling him out in front of everyone.

It is important to note that the folks at Predator Poachers didn’t immediately identify the man in their video as the police chief. However, after the chief appeared on local news when a 2-year-old girl went missing, they pegged him.

About 25 minutes before the chief went on the air to announce that a 2-year-old girl had gone missing, the chief was trying to lure a child for sex. As TB Daily News points out:

The messages continue on April 13 at 10:05 AM, when the Chief attempts to bring the child into the woods, presumably for sex. This is significant because according to WCVB a two year old girl in Stow went missing at 10:30 AM, and was found at 12:30 PM.

These vigilantes out their catching alleged pedophiles provides an a much-needed service to humanity. There are groups like this all over the country and through their actions, they serve to deter pedophiles going online for fear of being outed.

Sadly, however, despite the high chances of the person on the other end of the text message being a cop or predator hunter, these sickos are unable to control their urges and continue to get busted.

This is overtly apparent in the alleged actions of this police chief. He is a cop. He knows what happens to pedophiles in jail, knows that there are stings all the time to take them down, yet he still actively sought out sex with a child online. Shameful indeed.