The United States and Iran continue exchanging threats. The conflict between two long-standing geopolitical opponents is not going to fade away. 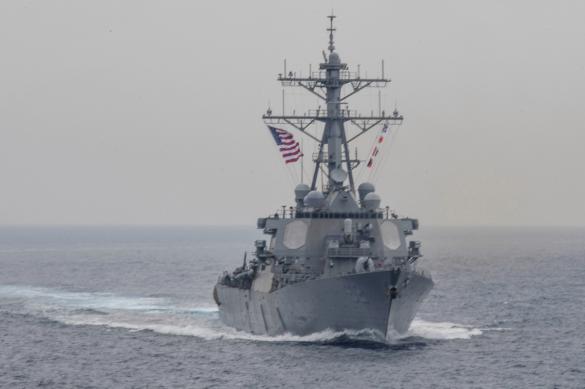 US President Donald Trump threatened to destroy any ships of the Iranian Navy ships that threaten the US military in the Persian Gulf. The coronavirus pandemic does not stop the conflicting parties. Recent incidents threaten to exacerbate relations between Washington and Tehran.

Donald Trump has taken the conflict to a new level when he tweeted a threat to sink any Iranian warships in the Gulf, if they pose a threat to US forces.

It was later stated that the USA would need to open fire at Iranian ships and boats if they come too close. Experts believe that such a sharp reaction followed the on April 15 incident in the Persian Gulf off the coast of Kuwait, where eleven ships of the Iranian Navy maneuvered dangerously close to US warships.

No one was hurt, neither side opened fire. The leadership of the Iranian Islamic Revolutionary Guards Corps (IRGC) accused the US for the incident, having claimed that it was US warships that were acting provocatively interfering with military exercises.

As explained by Pentagon deputy chief David Norquist, Trump voiced a warning to the Iranians. American ships retain the right to self-defense, the message from the US administration said. Although the military were somewhat discouraged, since there was no discussion as per a change in the rules of warfare before.

Tehran expectedly responded to Trump’s hostile remarks, noting that the country “does not start a war, but teaches a lesson to those who do it.” The head of the Ministry of Foreign Affairs of the Islamic Republic, Javad Zarif, wrote on his Twitter:

“Unlike the United States, which lie stealthily, deceive and commit murders, Iran acts only for the purpose of self-defense.”

The relations between the United States and Iran deteriorated dramatically after Washington pulled out from the “nuclear deal” with Tehran. The United States traditionally imposed sanctions, but the biggest problem became the assassination of Iranian General Qasem Soleimani, who was killed as a result of the US missile strike near Baghdad in January of this year. Tehran responded with a missile strike on a base in western Iraq, where the US military was deployed.

On April 22, the IRGC announced that Iran launched its first military satellite. In this regard, John Hyten, Air Force general, who serves as the 11th Vice Chairman of the Joint Chiefs of Staff, said that the launch of the military spacecraft became another example of Iran’s hostile behavior.

US Secretary of State Mike Pompeo, speaking at a press conference on April 22, accused Iran of violating UN Security Council resolution No. 2231 from 2015, which prohibits the launch of nuclear-capable ballistic missiles.

Adlan Margoev, an analyst at the MGIMO Institute for International Studies, said that all accusations that the USA makes are part of manipulations to stop the UN Security Council from lifting the arms embargo from Iran. Therefore, the USA will continue making accusations against Iran, even if the country did not violate anything.

Interestingly, USA’s claims about the assistance that Iran received from North Korea and Pakistan to build the rocket do hold water, since there are few completely authentic technologies in this area.

Technically, the USA may launch a military confrontation with Iran. One may obtain good profit of it, although this is definitely not the best time for such an endeavor. The United States takes the lead in terms of Covid-19 infection, and Trump wants to focus on other issues, where he can show himself to advantage.