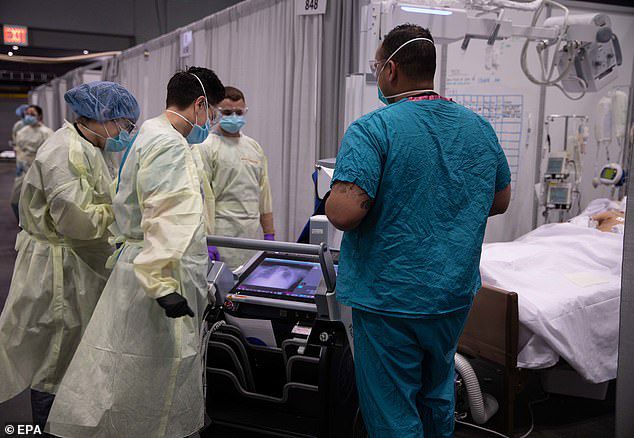 Two hospitals in the US are now experimenting on men with coronavirus by pumping them full of estrogen and progesterone to see if the female sex hormones boost their immune systems and reduce the severity of the illness.

Stony Brook University in New York and Cedars-Sinai in California are giving male coronavirus patients estrogen and progesterone because doctors are wondering if the female sex hormones could make men more likely to survive the novel coronavirus.

This has led many researchers to wonder if the hormones mainly produced in women could be protective, reported The New York Times.

DailyMail report: Last month, Italy’s public health research agency said that more than 70 percent of the country’s deaths have been in men.

And, in February, China’s Center for Disease Control and Prevention said the fatality rate among men with coronavirus was 65 percent higher than among women.

Scientists say they don’t know why women seem less likely to die, but have suggested that women naturally tend to have stronger immune systems and are less likely to have long-term health conditions which make patients more vulnerable.

In China, researchers pointed the finger at men being more likely to smoke and drink, but this was a cultural factor which may be different in other countries.

This soon became apparent in the US. In New York, more than 60 percent of the state’s deaths have been among men.

Early research has suggested the hormones may reduce the number of ACE2 receptors on the surfaces of cells that the virus uses to enter the body.

The Renaissance School of Medicine at Stony Brook University in Long Island, New York will be investigating estrogen, the primary female sex hormone.

Dr Sharon Nachman, chief of the division of pediatric infectious diseases, told The Times that the trial enrolled its first participant last week.

She hopes to have preliminary results in the next couple of months.

‘It’s totally out of the box, which is how good ideas often start,’ Dr Nachman, associate dean for research at the Renaissance School, which is part of the State University of New York.

The Stony Brook University estrogen trial hopes to recruit 110 patients who visit the emergency room and have symptoms such as coughing, fever or shortness of breath.

They either have to test positive for COVID-19 – the disease caused by the virus – or are presumed to have it, just as long  as they don’t need to be intubated.

Half will be given an estradiol patch for one week and the other half will be a control group. Researchers will see if the hormone helps reduce the disease’s severity.

The hypothesis is that the hormone could help clear the infection and prevent cytokine storms, which is when the body doesn’t just fight off the virus but also attacks its own cells and tissues, from occurring.

‘We may not understand exactly how estrogen works, but maybe we can see how the patient does,’ Dr Nachman told The Times.

‘While we see women do get infected, their responses are different. We see fewer of them having the second, disregulated immune response.’

It has been shown to reduce inflammation and prevent the immune system from overreacting to outside pathogens.

‘There’s a striking difference between the number of men and women in the intensive care unit, and men are clearly doing worse,’ Dr Sara Ghandehari, a pulmonologist and intensive care physician at Cedars-Sinai Medical Center, told The Times.

She told the newspaper that 75 percent of her hospital’s intensive care patients and patients on ventilators are men.

Around 40 male patients will be enrolled in the Cedars-Sinai study, all of whom have tested positive for the virus and have mild to moderate cases.

Half of the participants will be given two shots of progesterone per day for five days and the other half will be a control group.

Researchers will see if this help control their oxygen levels and prevent the need to go the ICU or be intubated.

Similarly to the estrogen study, the theory is that progesterone will also prevent cytokine storms.

Dr Ghandedari said she has also seen that the majority of ill pregnant women, who typically high levels of both hormones, have midl case of the virus.

Both hospitals told The Times that all male participants will be warned of possible side effects such as hot flashes and breast tenderness.