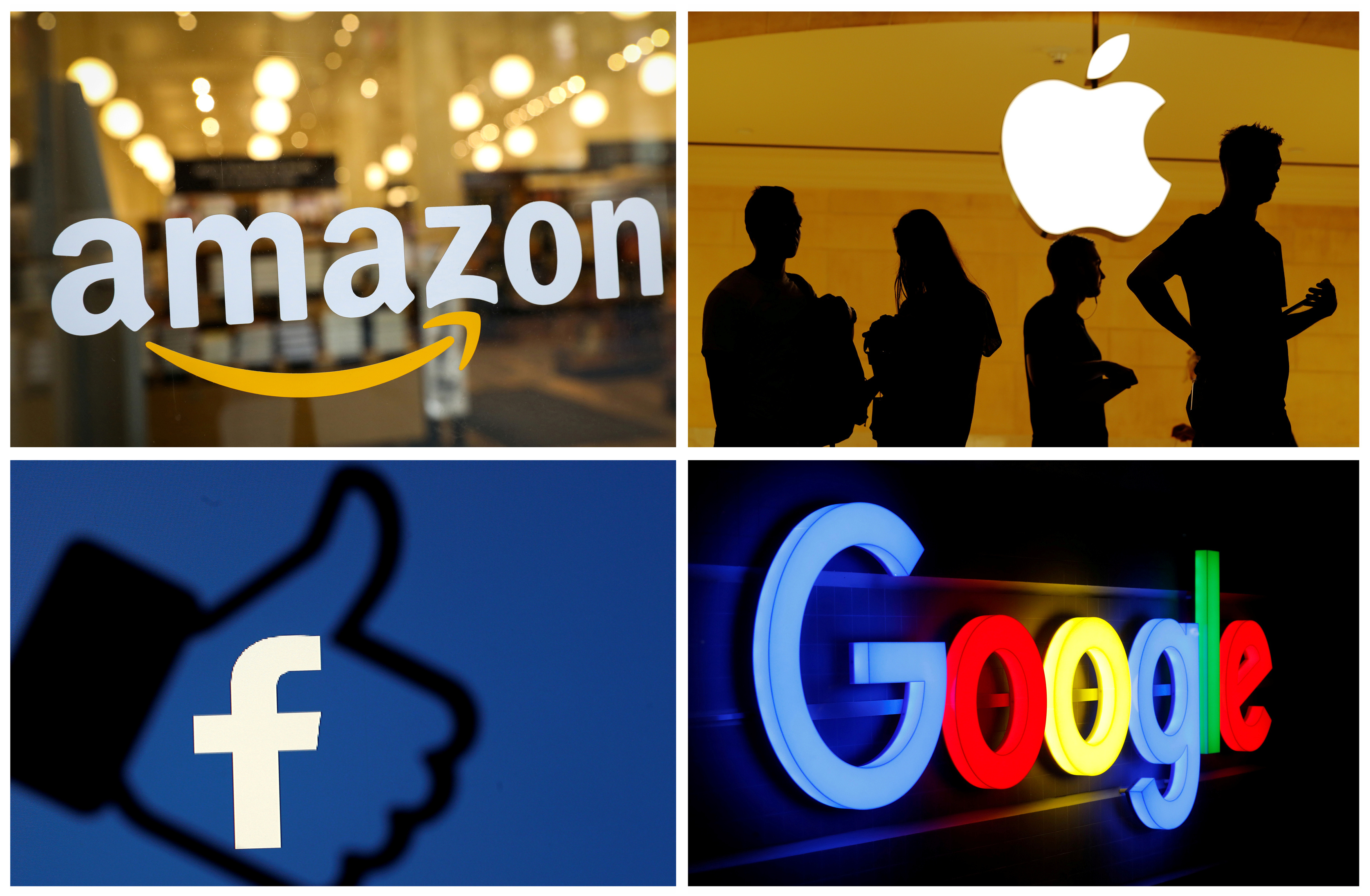 How ironic that the 1984 iconic advertisement that Apple used to introduce the Macintosh computer “played on imagery from George Orwell’s 1984 novella [sic] presenting Apple as rebels fighting a technocratic elite.  The spot certainly was a lot gloomier than the company’s previous commercials, that used Apple celebrity spokesman Dick Cavett.” In truth, “there was nothing cuddly about the new Macintosh ad, which was firmly rooted in the burgeoning dystopian cyberpunk aesthetic.”

Ostensibly the advertisement’s intention was “to remove people’s fears of technology [.]” In fact, Apple claimed that they “wanted to democratize technology, telling people that the power was now literally in their hands.”

How things have changed as the tech giants have morphed into near-totalitarian giants controlling far too much of our lives.  Like serfs, we bend to their will or are punished. Thus, Candace Owens is suspended from Twitter for challenging Michigan governor Gretchen Whitmer while  Facebook flags the Declaration of Independence as ‘”hate speech.”

In 2016, Aaron Renn reported that both conservative and leftwing groups are pulled down at Twitter. In 2019 “YouTube blocked some British history teachers from its service for uploading archive material related to Adolf Hitler, saying they [were] breaching new guidelines banning the promotion of hate speech. The video-sharing website announced that it would remove material glorifying the Nazis from its platform in an attempt to stop people being radicalised. In the process however, it also deleted videos uploaded to help educate future generations about the risks of fascism.”

In 2018, Michael Cutler noted that Twitter has “now morphed into a means of thought control through the control of language.”  Thus, any discussion about immigration that does not pass the politically correct litmus test is censored and controlled.

Today our cell phones and other devices that apparently eavesdrop on us, are far more intrusive than Orwell could have envisioned.

Most recently, YouTube, a subsidiary of the technology giant Google, abused its power by censoring opinions criticizing the continuation of strict stay-at-home government mandates in response to the coronavirus pandemic.

In 2017 Roger McNamee highlighted the fact that “the big Internet companies know more about you than you know about yourself, which gives them huge power to influence you, to persuade you to do things that serve their economic interests.” Thus, in 2013 “a study found that average consumers check their smartphones 150 times a day. And that number has probably grown. People spend 50 minutes a day on Facebook. Other social apps such as Snapchat, Instagram, and Twitter combine to take up still more time. Those companies maintain a profile on every user, which grows every time you like, share, search, shop or post a photo. Google also is analyzing credit card records of millions of people.”

In academia, many colleges now mandate that instructors use a security system in order to log in to their classes, i.e. Okta, Duo. They use identity verification with multifactor authorizations.  These cloud-based platforms are supposed to “protect users, data and applications from malicious hackers and data breaches.”  But with that vast array of information, who is watching the watchdogs?

Moreover, state and federal governments are now preparing to hire “contact tracers.”  Also known as “disease detectives,” contact tracers notify people by phone, e-mail, or social media platforms [my emphasis] that they may have had “sustained contact” to someone who has the coronavirus.  Senator Kristin Gillibrand introduced a $55 billion bill to cover the salaries of contact tracers and Michael Bloomberg is donating $10 million to get the tracing off the ground. Thus, “[a]n army of pandemic detectives will have to be recruited, trained and deployed in short order.” Teachers are being recruited. AFT President Randi Weingarten asserts that the Trump administration has engaged in “conflicting guidance, bluster and lies” re: the pandemic. Given those who sponsor this program, is it prudent to inquire whether this information can eventually be used against Americans?

While many households use Amazon’s Alexa, do they realize that it stores “query history meaning [it] knows everything from a consumer’s shopping history, travel patterns and musical preferences?”  Vance Packard’s Hidden Persuaders could never have imagined the power that technological giants now possess. Moreover, “[t]housands of Amazon workers are already listening to some Echoes in order to improve Alexa’s comprehension of human speech.”

In fact, “in modern life, privacy is no longer a given — people are being tracked on their daily commute, at work, online, and when they’re shopping.  That’s because data is valuable.  In 2018, American companies spent an estimated $19 billion attaining and interpreting consumer data.” The data is an “invisible supply chain that creates marketplaces out of behavioral data.” Thus, “[w]hen someone has a digital conversation or makes a purchase, that’s recorded. That record is shared with a third party, which can sell the data to another organization.”

Incrementally our privacy is invaded.  In fact, “[t]he day of losing privacy begins at night, because even in our sleep, we’re likely to be providing data.” Furthermore, with facial recognition devices, we are heading into a world where businesses and government know “potentially everywhere you’ve been, who you were with and what you were doing all of the time.”

In addition, “operating within your own email inbox is no longer private. If you’re applying for college, your email etiquette could be monitored. Universities in the US are using data, such as the length of time an email is open and whether links are clicked, to work out the level of ‘demonstrated interest’ from a possible new student.”

Moreover, carrying a smartphone [is] like carrying a tracking device because Google Maps can remember where you go and save it to a Google Timeline.

Workplaces monitor employees’ movements, their work rate on computers and their calendar data.

Gordon Chang has long been concerned with the ‘”digital totalitarianism in China which assigns every person a constantly updated score on observable behaviors.” The score “is designed to control conduct by permitting the Communist Party the ability to administer punishments and  hand out rewards.”  Lest one scoff that this could never happen here, consider that

corporations and governments are using technology to influence our behavior.  Total tech is a term that describes devices and algorithms by which individuals forfeit their privacy and autonomy for the benefit of either themselves or some third party.

In 2019 Betsy McCaughey wrote that “Facebook was “imposing its own Silicon Valley brand of political correctness.”  Daniel Greenfield maintains that “[a] digital iron curtain descends over the internet” and the only way “to stop the rise of Big Brother is to break up Big Data.”  Otherwise, he predicts, “free speech on the web — as we once knew it — will be over within a decade.”

Scott McKay asserts that “When Facebook and YouTube start restricting speech, they are taking an editorial position.  They are not policing speech in order to provide a safe environment for their users; they are asserting that their point of view is the only valid one.”

That makes them publishers and if they want to be publishers, they can be sued as one. It isn’t acceptable for monopolistic Big Tech actors to arbitrarily ban content they don’t like while acting to drive competitors from the scene, and whether that’s punished by the courts, antitrust laws, or federal regulation before the market can do its work, something has to give. If not, then we will find ourselves just like China before long, where only one opinion is allowed.