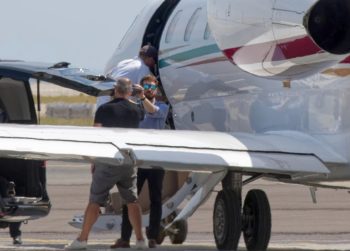 Prince Harry, who last year claimed to be so overwhelmed with anxiety about “climate change” that he sometimes finds it “hard to get out of bed in the mornings”, accepted a lift on the enormous private jet in a top secret, early morning enterprise, according to British reports.

Harry and Meghan have been tagged as hypocritical for all their hysterical climate change talk and urgent climate warnings while still themselves enjoying a lavish lifestyle including the use of private jets.

The secretive flight allowed the retired royals to leave their temporary home on Canada’s Vancouver Island and to avoid any wait at customs once they arrived in Los Angeles, California

‘It was a well-planned operation that appears to have worked perfectly,‘ one insider said.

But the question has remained — until now — how did they get from Canada to southern California without being seen?

DailyMail.com has learned Perry’s $150 million jet left its base outside Atlanta at 1:35am on Saturday, March 14 on its way to pick up Harry, Meghan and one-year-old baby Archie.

It is not known whether the Madea star was himself on the Embraer-E190, a ‘stretch’ version of a plane mainly flown by JetBlue Airlines in the United States.

The plane landed at a corporate airport in Portland, Oregon, five hours later at 3:39am West Coast time, staying for a little over an hour before flying on to Victoria International Airport, just minutes from the waterfront home in North Saanich where they had been living since fleeing England.

The plane then took off from Victoria with the former royals on board at 7:35am for the quick hop back to Portland’s Hillsboro Airport.

Then it was on to Hollywood Burbank airport, previously named Bob Hope,  where they landed at 10:01am. They could speed through that celebrity-filled airport having already gone through Customs and immigration in Portland.

Perry bought the Embraer in 2017 and houses it at McCollum Field, a municipally owned airport in Cobb County just outside Atlanta. The Hollywood star was given a $1.8 million tax break to keep it there under a top-secret plan known as ‘Project Meatloaf.’

Rather than being registered directly to Perry, it is owned by a holding company known as ETPC Aviation.

The plane, with a top speed of 541 mph, is large enough to carry up to 124 people in coach class.

‘It’s a beast,’ said one aircraft insider. ‘Why anybody would want a private plane of this size is beyond me.’