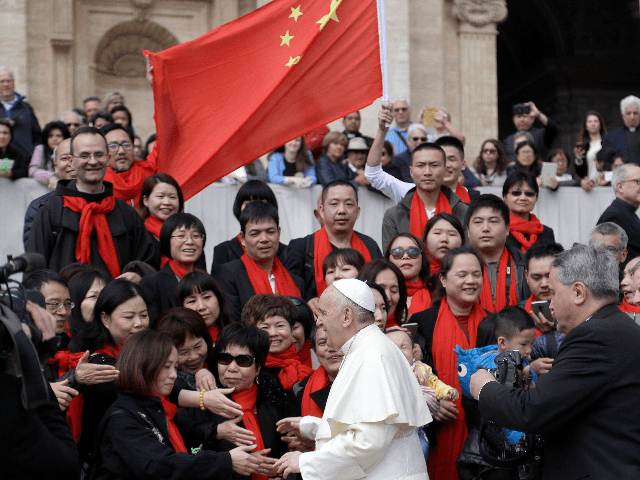 ROME — The Vatican is pulling out all the stops to woo Beijing into full diplomatic relations, according to veteran Vatican journalist John L. Allen, Jr.

In an article Sunday in Crux, a U.S.-based online Catholic news outlet, Allen wrote that the Vatican is “covetous of a relationship with China, and often apparently willing to stifle objections and give away a great deal” in order to make headway.

In short, “the Vatican is moving full-steam ahead in its courtship of Beijing, with the ultimate prize remaining full diplomatic relations, a secure legal standing for the church, and partnerships on the global stage,” Allen wrote.

His case in point was the notorious 2018 provisional accord between the Holy See and the Chinese Communist Party (CCP) on the naming of Chinese bishops, a move that received an avalanche of criticism at the time, which has only been aggravated by ongoing CCP aggressions against Christians in the country after the deal was inked.

The Vatican’s 2018 overture to Beijing was sweetened by last month’s launch of a new Chinese edition of the Jesuit-edited journal Civiltà Cattolica, which enjoys a semi-official Vatican status, Allen noted.

Christian persecution watchdog groups as well as the U.S. Commission on International Religious Freedom (USCIRF) have been harshly critical of the CCP’s egregious violations of religious liberty in the country, and yet in its many appeals against human rights abuses around the world, the Holy See has been strangely silent when it comes to China.

For his part, Pope Francis has insisted that China’s communist government protects religious freedom and that “churches are full.” Meanwhile, the chancellor of the Pontifical Academy of Social Sciences, the Argentinian Bishop Marcelo Sanchez Sorondo, has declared that the CCP has created the best model for living out Catholic social teaching today.

Mr. Allen’s evaluation of the Vatican’s courtship of China squares with what other Vatican-watchers have been noting as well.

Francis dreams of being the pope who will establish diplomatic relations with Beijing, and to achieve this goal he is willing to make “concessions,” declared Vatican analyst Alban Mikozy on French television last December.

“Pope Francis is a prudent man,” Mikozy said. “He pursues a dream: to be the sovereign pontiff who will restore relations between China and the Vatican.”

“In order to do this, he is ready to make a few concessions: say nothing about Hong Kong, do not get too excited when the Chinese leader talks about rewriting the Bible,” he added, in reference to announcements that the CCP intends to retranslate the Bible and other sacred texts to make them conform to socialist ideology.

Because of this overriding desire, Mikozy said, the pope is willing to turn a blind eye to the CCP’s violations of religious liberty and other human rights issues.

At the time, observers were quick to notice the pope’s omission of Hong Kong in his long list of troubled areas around the world in his traditional Christmas “Urbi et Orbi” message.

Among the many held up for their suffering, the pope mentioned “the Middle East,” the “beloved Syrian people,” “the Lebanese people,” “Iraq,” “Yemen,” “the whole American continent,” “the beloved Venezuelan people,” “beloved Ukraine,” “the people of Africa,” “the Democratic Republic of the Congo,” “Burkina Faso,” “Mali,” “Niger,” “Nigeria,” along with three separate shout-outs to migrants.

Yet Hong Kong, embroiled for months in an ever more violent conflict between pro-democracy protesters and the Communist China-backed government forces, received no papal acknowledgment whatsoever.

One month earlier, during an in-flight press conference returning from Asia, the pope reiterated his desire to visit China while dodging questions regarding the Hong Kong protests.

“I would like to go to Beijing,” Francis said. “I love China.”

According to Mikozy, the pope’s silence suggests that he will go to great lengths not to offend the CCP.

“A few months ago, the Chinese authorities sent the message that a meeting was possible,” Mikozy said. “The pope said he was ready for this possibility. For the moment, it is the hardliners of the Chinese regime who have held Xi Jinping back.”

In his article Sunday, Mr. Allen proposes that the Vatican’s current strategy toward Beijing reflects the pope’s stated goal of being a bridge-builder, especially in a case like China where the stakes are immensely high.

“Critics may regard all that as naïve, or weak, or even delusional, and no doubt they’ll be vocal about saying so,” Allen said.