‘We’re not trying to have conflict…’ 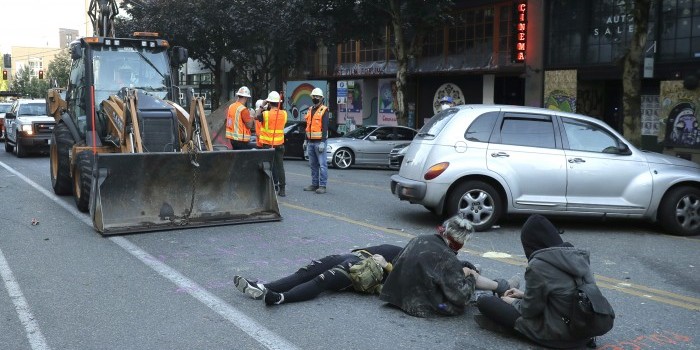 Protesters lie down and sit in the street after workers and heavy equipment arrive at the the CHOP. / PHOTO: Associated Press

(Liberty Headlines) Crews arrived with heavy equipment Friday at the occupied protest zone in Seattle, ready to dismantle barriers set up more than two weeks ago by demonstrators, but the work was halted when some protesters resisted by climbing atop the makeshift structures.

Stefanie Formas, a spokeswoman for Mayor Jenny Durkan, said the city’s goal is to improve access to the area for residents. She said city officials would discuss plans later in the day with protest organizers.

The collective of anarchist rioters, activists and others in the Capitol Hill Organized Protest was formed ostensibly after clashes with police who tear-gassed people protesting the police killing of George Floyd in Minneapolis.

However, evidence has suggested that organized Antifa-linked protesters had been training and planning for just such an occurrence well before Floyd’s Memorial Day death..

Far-left Bernie Sanders surrogates had acknowledged in March, even before the coronavirus shutdowns, that leftist instigators were planning riots that would “make violence during the 1968 Democratic convention in Chicago “look like a f***ing Girl Scout f***ing cookout.”

The well-trained, well-funded rioters are believed to be backed by globalist mega-donors including George Soros through various shell organizations.

Durkan, likewise, expressed support for the protest. She called it “a peaceful expression of our community’s collective grief and their desire to build a better world,” despite early indications of reckless and lawless behavior, as well as bigotry against law-enforcement, media, shop-owners and other members of the so-called capitalist system.

But following several shootings in the area, Durkan said the city would wind down the protest zone, at first by encouraging demonstrators to leave. In addition, she said police would return to a nearby precinct that was abandoned following clashes with demonstrators.

The work crews intended to remove the barricades, not protesters, Sam Zimbabwe, city transportation director, told local journalist Omari Salisbury, who has been live-streaming the protest.

Workers were preserving artwork that had been painted on the wooden barricades, Zimbabwe said, adding that the department would work to return it to the people who created it.

“We’re not trying to have conflict,” Zimbabwe said.

A number of protesters remained camped in tents outside the East Precinct. The city has not given a timeline for officers’ return to the building except to say it would be in the near future.

Protesters have called for cutting the police budget 50% and spending the savings on community health and other programs. The mayor has proposed a vastly more modest cut of $20 million to help balance the city’s budget through the end of this year.