A man suspected of fatally shooting a supporter of a right-wing group in Portland, Oregon, last week was killed Thursday as federal agents tried to arrest him.

LACEY, Wash. — A man suspected of fatally shooting a supporter of a right-wing group in Portland, Oregon, last week after a caravan of Donald Trump backers rode through downtown was killed Thursday as investigators moved in to arrest him, a senior Justice Department official told The Associated Press.

The man, Michael Reinoehl, 48, was killed as a federal task force attempted to apprehend him in Lacey, Washington, the official said.

Reinoehl was the prime suspect in the killing of 39-year-old Aaron “Jay” Danielson, who was shot in the chest Saturday night, the official said.

Federal agents from the FBI and the U.S. Marshals Service had located Reinoehl on Thursday after a warrant was issued for his arrest. During the encounter, Reinoehl was shot by a law enforcement officer who was working on the federal task force, the official said.

The official said Reinoehl had pulled a gun during the encounter and was shot by law enforcement. The official could not discuss the matter publicly and spoke to the AP on condition of anonymity.

The U.S. Marshals Service fugitive task forces, comprised of deputy marshals, other federal agents and local law enforcement officers from a variety of agencies, are responsible for apprehending violent felons and other wanted suspects

Reinoehl had described himself in a social media post as “100% ANTIFA,” suggested the tactics of counter-protesters amounted to “warfare,” and had been shot at one protest and cited for having a gun at another.

He had been been a regular presence at anti-racism demonstrations in Portland.

Police on July 5 cited Reinoehl on allegations of possessing a loaded gun in a public place, resisting arrest and interfering with police.

On July 26, Reinoehl was shot near his elbow after he got involved in a scuffle between an armed white man and a group of young people of color. The man who was carrying the gun, Aaron Scott Collins, told The Oregonian/OregonLive that he and a friend had just left a bar when they saw the group harassing an older Black man. His friend began filming them with a phone, and the group confronted them, calling them Nazis, he said.

Reinoehl later that day spoke to an AP videographer. His arm was wrapped in a bloody bandage; he said he was on his way to meet protest medics so they could change it.

He said he didn’t know what had started the altercation between Collins and the group, but that several people had decided to intervene when they saw Collins fighting with minors.

“As soon as the adults jumped in, he pulled out a gun,” Reinoehl said. “I jumped in there and pulled the gun away from people’s heads, avoided being shot in the stomach and I got shot in the arm.”

Reinoehl also was wanted on a warrant out of Baker County in Eastern Oregon, where court records show he skipped a hearing related to a June case in which he has been charged with driving under the influence of controlled substances, reckless driving, reckless endangerment and unlawful possession of a firearm.

Police said he drove on an interstate at up to 111 mph, with his daughter in the car, while racing his 17-year-old son, who was in a different vehicle.

Protests have erupted daily in the Pacific Northwest city since the killing of George Floyd.

With unruly demonstrations in Portland nearing the 100-day mark, Oregon Gov. Kate Brown and other Democratic leaders on Thursday called for an end to violence even as federal agents were continuing to arrest protesters who allegedly assaulted law enforcement officers.

“The violence must stop,” Brown wrote. “There is no place for white supremacy or vigilantism in Oregon. All who perpetrate violent crimes must be held equally accountable.”

The statement does not single out the small minority of left-wing protesters who have been setting fires, vandalizing buildings and throwing objects at police. But Brown’s spokesman, Charles Boyle, said it “is a collective call to action for an end to violence in Portland and affirms that those who commit violent acts must be held accountable.”

Friends call victim a ‘good man’ with ‘a huge heart’

In the meantime, friends are mourning Danielson, the 39-year-old man from Portland who was killed Saturday, allegedly by Reinoehl. 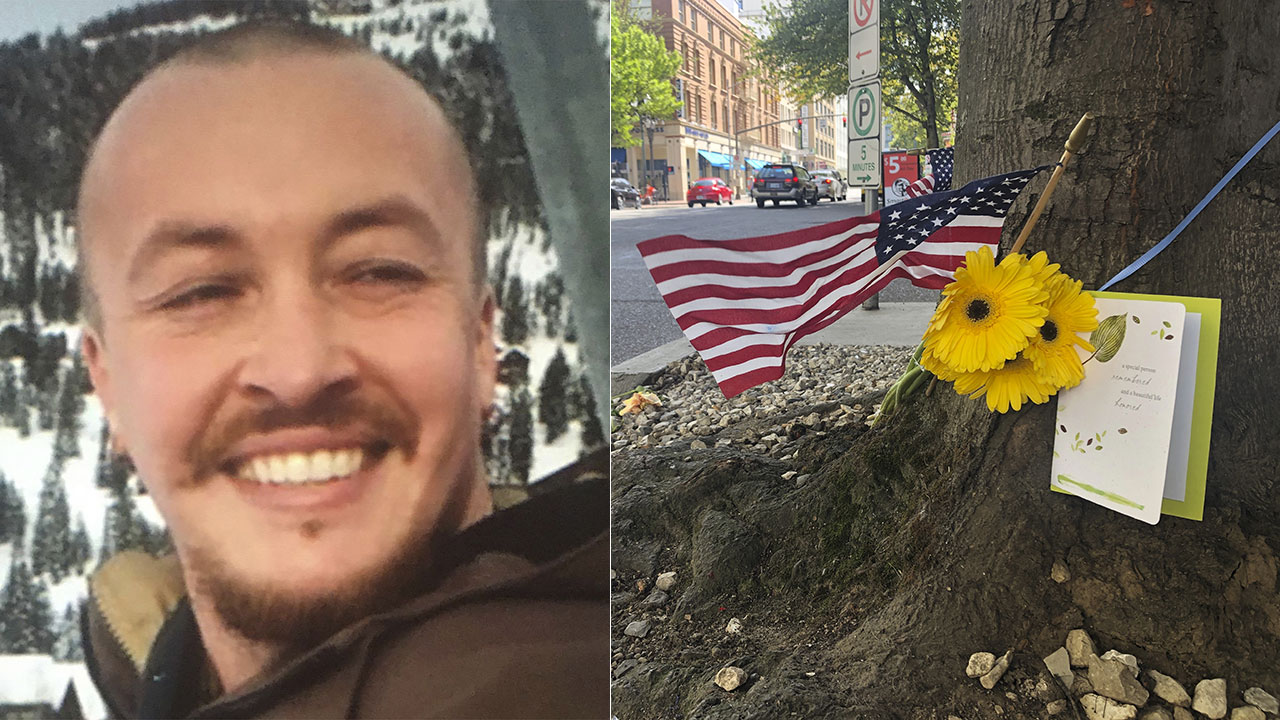 Aaron “Jay” Danielson was shot and killed on Saturday, Aug. 29, 2020 in Portland, Ore. as protesters clashed with supports of President Trump. At right is a memorial to Danielson.

Danielson, a burly, bearded man, helped run a company in Portland called North West Specialty Moving that focused on transporting heavy items such as marble statues, hot tubs and gun safes. The company’s address, which is the same address listed for Danielson for two parking violations in 2019, is a modest blue bungalow in a residential neighborhood in southwest Portland.

Just hours before he was shot in the chest Saturday night, Danielson and a friend were seen heading downtown to protect a flag-waving caravan of Trump supporters.

They wore hats with the insignia of Patriot Prayer, a group that has clashed with left-wing protesters in Portland for years, and appeared armed with knives and paintball guns.

“Paint is a defensive mechanism. Paint is not bullets,” Trump said during his White House briefing Monday, adding that someone connected with violent protests “shot a young gentleman and killed him. Not with paint but with a bullet.”

In cellphone video of the shooting, both Danielson and his assailant were seen on a darkened street. At least three shots rang out in a smoky haze, followed by images of Danielson crumpled on the ground as the friend, Chandler Pappas, slaps him in the face and rolls him over, yelling “Jay! Jay!”

“He was a good man and he was just killed senselessly for no reason other than he believed something different than they do,” Pappas told supporters during a rally Sunday. “He was Christian. He was conservative.”

Added Patriot Prayer founder Joey Gibson on his Facebook page: “We love Jay and he had such a huge heart. God bless him and the life he lived.”

Ex-girlfriend Christine Banks said Monday Danielson didn’t discuss politics much but of the weeks-long protests in Portland: “He didn’t think it was right. … He was there for peace.”

Banks said Danielson was a good person who loved nature and animals.

“If you ask anybody, the one thing they’ll remember him by is his goofy, beautiful smile,” she said. “He cared about what you believed in and not the color of your skin.”

A GoFundMe site late Monday said it had raised $33,000 from more than 900 donors for “legal/lawyer fees, and towards fulfilling all other incurred costs in this time of need.”