Bank of Israel says economic damage of latest closure actually expected to be somewhat less than previous ones, due to more lax restrictions and schools staying partly open

Ministers on Friday approved the regulations of Israel’s third national lockdown, beginning at 5p.m. Sunday, as the Bank of Israel issued an assessment that the closure would cost the nation’s economy NIS 2.5 billion ($776 million) for every week it lasts.

The cost assessment is actually lower than that of the nation’s previous two lockdowns (the October lockdown was assessed to cost NIS 3.2 billion per week), owing to the fact that restrictions on workplaces are seen as less tight, and that working parents are less limited by their children as schools will be operating normally for younger ages.

Many Israeli business owners faced fresh anxiety over the new lockdown, complaining of the government’s erratic policies and warning that they may not survive yet another forced closure.

An empty road in Tel Aviv on October 8, 2020, during a nationwide coronavirus lockdown. (Miriam Alster/Flash90)

During Israel’s third national lockdown aimed at curbing the resurgence of COVID-19, rules will bar Israelis from entering another person’s home, except for immediate family members; restrict movement to 1 kilometer from home, with exceptions, such as for vaccinations; shut down commerce, leisure and entertainment; limit public transportation to 50% capacity; and limit workplaces that do not deal with customers face-to-face to 50% capacity.

Kindergartens and school grades 1-4 and 11-12 will study as usual during the lockdown, while grades 5-10 will study remotely.

Israel’s two previous lockdowns, in April and September, succeeded in bringing down infection numbers, but morbidity ballooned again as the closures were rolled back.

The cabinet also approved on Friday ending the so-called “green islands” program, which allowed travelers free rein in the tourist areas of Eilat and the Dead Sea.

The rise in Israel’s coronavirus infection rate continued Friday, with the Health Ministry reporting nearly 4,000 new cases had been diagnosed the previous day.

Fears have also grown in recent days that Britain’s new, more transmissible variant of the virus is spreading through the population. On Thursday the Health Ministry said five cases had been confirmed in the country, with reports indicating officials were examining dozens of other cases they suspected were of the new strain. 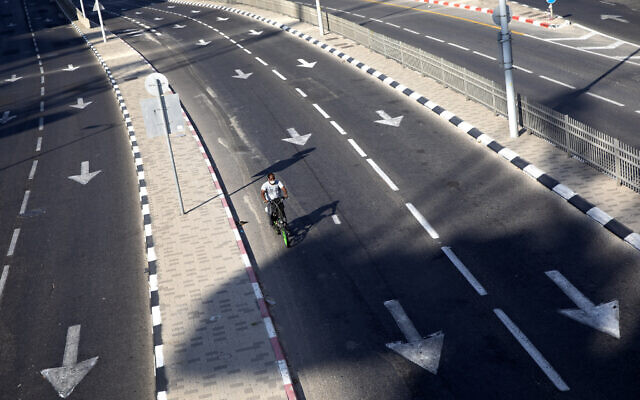 Despite the setbacks, health officials have expressed optimism that the latest closure will be the nation’s last as it steps up its vaccination drive. The ministry announced Friday that over 74,000 people had been vaccinated against the virus Thursday, taking the total number of people to receive the first dose of the vaccine to 210,000.

Shots were administered to medical staff from Sunday and Israelis in at-risk populations from Monday. Hospitals were set to join the effort next week, ramping up the campaign, with the prime minister and health officials saying Israel aspired to become the first country in the world to achieve herd immunity against COVID-19.

Prime Minister Benjamin Netanyahu went so far as to say Thursday that he believed the Jewish state would emerge from the pandemic “within a few weeks.” No other world leader has made such an assertion, and many have warned the pandemic will potentially take months more to defeat.

The Health Ministry is aiming by next week to vaccinate 100,000 Israelis per day. Health Minister Yuli Edelstein said Thursday he wanted vaccinations to take place 24/7, including on the Jewish Sabbath.