Numerous engineering experts have taken a look at the construction of the building vs. the original drawings/plans. Two of the experts including one engineer hired by the city of Surfside raised a red flag when it came to steel in the structure of the building.

A forensic engineering expert hired by the city of Surfside to investigate the collapsed building’s structure confirmed there were signs that the amount of steel used to connect concrete slabs below a parking deck to the building’s vertical columns might be less than what the project’s initial plans specified.

“The bars might not be arranged like the original drawings call for. He said he would need to inspect the rubble more closely to determine whether in fact the slab-to-column connections contained less steel than expected.” 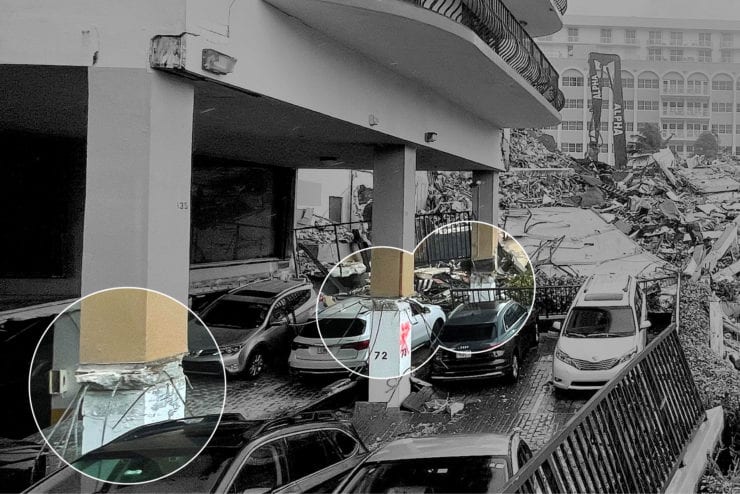 R. Shankar Nair, a National Academy of Engineering and former chairman of the Council on Tall Buildings and Urban Habitat saw inconsistencies between the design and the steel that remained visible in the columns.

“There does not appear to be enough steel connecting the slab to the columns. What we see out there seems inconsistent with what the drawings show.”

The investigation of the collapse is ongoing so that these initial findings could change, and there could be several factors that came together to bring the building down.

Construction regulations and inspections have been strengthened since the 1980s, but the Champlain Towers had been built before then.

Eyewitness accounts from survivors point to flooding on the ramp and inside of the underground garage before the collapse. One woman even took a video of water pouring from the ceiling of the garage.

There have been reports over the years of flooding in the garage and pool equipment room. Would a combination of the continuous flooding and the cement weakening with less steel than required, be a factor?

One engineer who examined the building’s construction said, “We have a whole bunch of issues that we think might be part of or the trigger of what happened.”

OUR PREVIOUS REPORT FROM EYEWITNESSES:

A commercial pool contractor who took photos of the Seaside, Florida condominium building just 36 hours before it collapsed is speaking out to the Miami Herald.

The contractor who asked not to be named visited the building recently to examine the pool and bid on “cosmetic work.”

Did the tragedy begin with the pool and garage basement? According to the husband of a Cassondra “Cassie” Billedeau-Stratton missing from the Champlain Towers collapse, his wife called to tell him the pool caved in and described a massive sinkhole in its place just when the line went dead.

Cassondra “Cassie” Billedeau-Stratton (pictured below) is among the people missing from the Champlain Towers South collapsed.

Cassondra “Cassie” Billedeau-Stratton was staying on the fourth floor of the Florida condo complex close to the pool.

The pool repairs were part of the restoration project set to begin on the building. Residents of the building were being assessed $1,000 according to one woman who recently purchased a condo in the building for $600k. She survived the collapse and said the building problems were never revealed to her during the purchase:

Ileana Monteagudo told the New York Post that she paid $600,000 for a sixth-floor two-bedroom condo this past December in the Champlain Towers in Surfside, Flordia. She learned about structural issues only after she purchased the condo:

“They never told us anything. Then they suddenly make us make an extra $1,000 special assessment for all these repairs they need to do. We are supposed to start paying in July.”

According to numerous reports, the trouble in the pool area and the basement garage indicated serious problems.

Photo below of the pool equipment room via Miami Herald:

The contractor took photos of the garage of the Champlain Towers South showing cracking and extensive corrosion to structures plus pools of water on the floor.

Photo of standing water in the pool equipment room via the Miami Herald.

There have been reports of repeated flooding in the basement garage of the building. Former maintenance manager for the building William Espinosa told CBSLocal he had raised concerns about ocean water regularly inundating the parking garage. He said, “…it was so much water, all the time, that the pumps never could keep up with it.” The maintenance manager went on to say there was sometimes two feet of water in the basement:
“The water would just basically sit there, and then it would just seep downward,” Espinosa said. “It would just go away after a while. And I would think, where does that water go? Because it had to go in through somewhere. I’m talking about a foot, sometimes two feet of water in the bottom of the parking lot, the whole parking lot.”

The pool contractor sent the photos of the corrosion to his supervisor with recommendations, and two days later, the building partially collapsed.

Three years ago,  an engineer found “major structural damage” and “abundant” cracking of columns and beams at the Champlain Towers South.

There are numerous photos within the report showing the deterioration of the building. One photo below:

According to the Miami Herald, a report, “Structural Field Survey Report,” was produced for the condo association in October 2018 by engineer Frank Morabito of Morabito Consultants. Morabito wrote that the “main issue” at Champlain Towers was that the pool deck and outdoor planters “laid on a flat structure,” preventing water from draining. The lack of waterproofing was “a systemic issue” that traced back to a flaw “in the development of the original contract documents” 40 years ago, the report said.

“Failure to replace waterproofing in the near future will cause the extent of the concrete deterioration to expand exponentially.”

Fast forward to comments from Pablo Rodriguez, whose mother and grandmother lived in the Champlain Towers:

Pablo Rodriguez told CNN:  “The board collects over a million dollars of maintenance fees from the unit owners every single year. Where was that money going? Because it wasn’t going to maintenance.”

“You see these pictures. How did they not tell people that it was in this horrible of a condition? The rebar was exposed, the contractor confirms that the maintenance doesn’t happen overnight like that…it’s, it’s shocking that they allowed it to get into this. It’s negligence, and their negligence caused a lot of death here.”